While the networks barely batted an eye at the 2016 March for Life, 2017 was different: ABC, CBS and NBC spent more than 20 minutes on the march. The difference? President Trump, according to the networks themselves.

During their morning and evening news shows, the three broadcast networks dedicated 21 minutes, 52 seconds of coverage to Friday's 44th annual March for Life. That’s not as much as they could or should have spared, especially after they spent 1 hour, 15 minutes, 18 seconds (3.4 times more) fawning over the recent Women’s March on Washington. 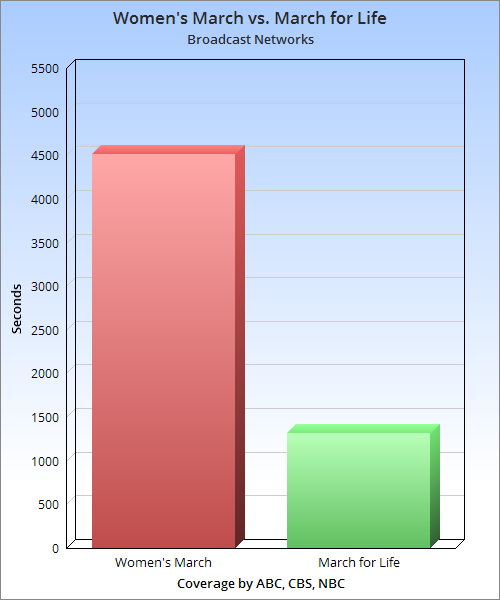 To put that in perspective, the networks spent almost 23 minutes on the pro-abortion women’s march – before it even happened. But their total 21 minutes, 52 seconds of coverage for the 2017 March for Life was still an improvement.

Of the networks, ABC was the only one to report on the 2016 March for Life, and then in a casual reference to “high schoolers trying to get back to Kentucky” after the blizzard that hit the Washington, D.C. march. For that same show, the morning of Jan. 22, co-anchor George Stephanopoulos commented on the expected “tens of thousands” to “protest abortion.” Those two mentions amounted to 35 seconds.

In other words, ABC, CBS and NBC combined covered the 2017 March for Life 37 times more than the 2016 March for Life. And the theme that united every news report was President Donald Trump, whether in regards to his impending Supreme Court justice pick and his pro-life policies or the new administration (including his vice president). 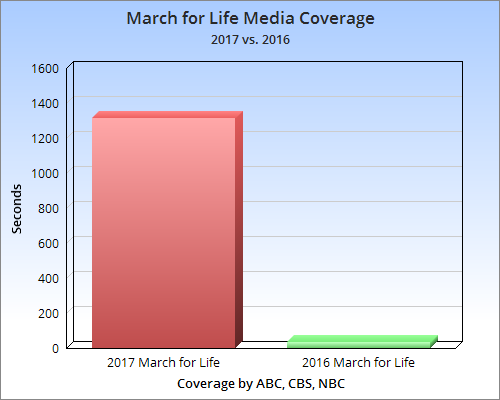 This year’s March for Life boasted Vice President Mike Pence and White House counselor Kellyanne Conway as speakers. The largest annual march in Washington, D.C., the March for Life laments abortion and celebrates human life around the anniversary of the Supreme Court’s 1973 Roe v. Wade decision. It was the first time a vice president made comments at the march. And while the president didn’t attend, he tweeted his support and challenged the press – in an interview with ABC anchor David Muir – to cover the march.

When Muir asked him about the women’s march in a recent interview, Trump turned the conversation to the March for Life. “The crowds were large, but you will have a large crowd on Friday, too, which is mostly pro-life people,” he said. “Some people said it will be larger. Pro-life people and they say the press doesn't cover them.”

Nets Use Trump as March for Life News Peg

From the very beginning, the networks mentioned the March for Life because of the White House. The first mention of the march came Jan. 22 during Today. While reporting on the women’s march, NBC anchor Willie Geist noted the White House’s reaction “focusing again on the media.” He read a statement give to NBC from a “top White House official”:

It`s a shame that the March for Life, which estimates the same number of marchers in DC (650,000 in 2013) and will be happening next Friday, will not get anywhere near the same amount of coverage that this march got -- and those pro-life members were NOT welcome at the Women`s March. The organizers noted that their platform is pro-choice and they revoked partnership status from pro-life groups.

On the morning of the march, Jan. 27, ABC correspondent Mary Bruce reported on the “demonstrators” who “feel they really have something to celebrate” with a President Trump. During Good Morning America, she pointed to the vice president speaking as a “sign of just how powerful this movement is” while, later on, correspondent Paula Faris stressed how Pence was “set to make history on the National Mall.”

During CBS This Morning, co-anchor Norah O’Donnell highlighted that her guest, Kellyanne Conway, was “scheduled to speak” at the march. “Will he appoint a Supreme Court justice that will repeal Roe vs. Wade?” she asked Conway of the president on Jan. 27.

“Vice President Mike Pence also expected to address the gathering,” she added later, “And President Trump is expected to call in to the rally.”

For Today, NBC correspondent Hallie Jackson echoed O’Donnell on President Trump and Vice President Pence’s involvement with the march. And, during the same news show, anchor Natalie Morales added that “For the first time in years, abortion opponents say they have political momentum.” As proof, she pointed to President Trump’s executive order “banning U.S. aid to foreign groups that provide abortions.”

Friday evening, all three networks predictably used the march to report on the impending Supreme Court nomination. But, in a surprising move, they reported on the march positively, beginning with CBS anchor Scott Pelley calling “today’s crowd bigger than in recent years” and CBS correspondent Jan Crawford highlighting the “tens of thousands” with “renewed hope.”

For NBC on Jan. 27, correspondent Peter Alexander reported on the “movement with new life” during Nightly News while ABC’s Mary Bruce remarked on the “crowds as far as the eye could see” on World News Tonight.

While the network coverage of the 2017 March for Life was upgraded from last year, the media still had room for improvement, beginning with language.

While describing the marchers, anchors and correspondents avoided the term “pro-life” in favor of “anti-abortion.” Here is a list of how they described the March for Life and its attendees:

The networks also used their own lingo in regards to the president’s upcoming decision to appoint a new Supreme Court justice: 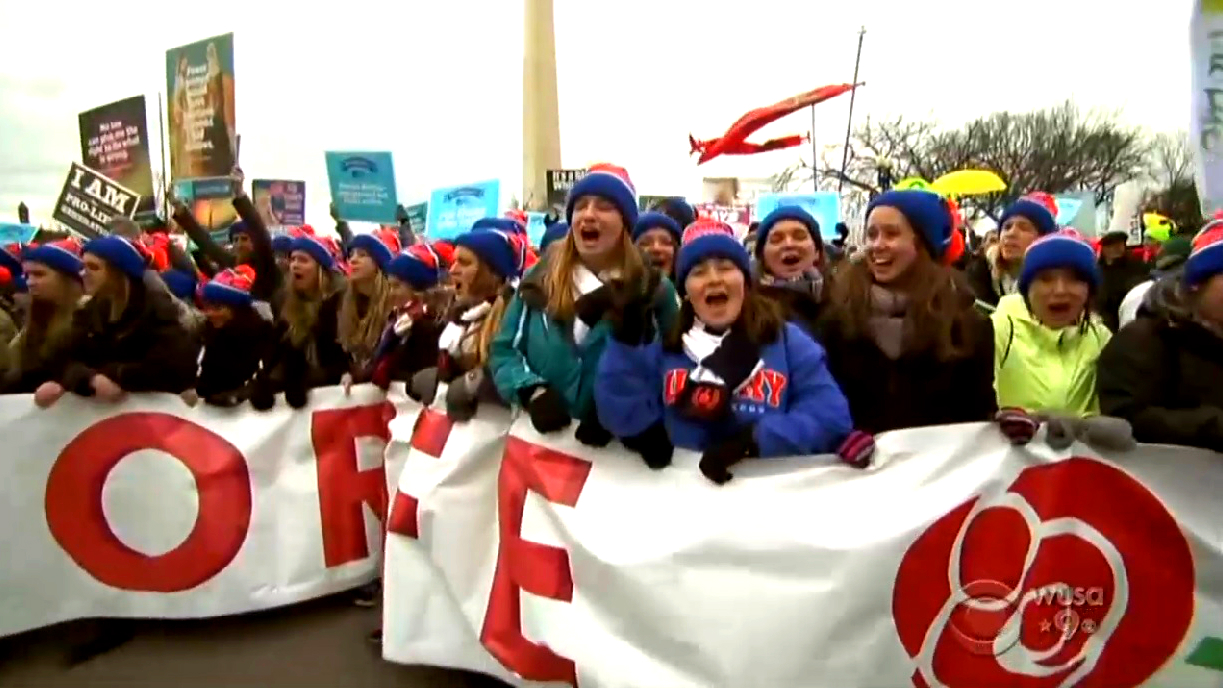 In their coverage of the women’s march, not once did a network news show mention the exclusion of pro-life women from the women’s march (minus the above White House comment given to NBC) or consult pro-life leaders for their reaction. But in their the 2017 March for Life coverage, the networks did include the other side.

That same evening, during World News Tonight, ABC anchor David Muir asked correspondent Mary Bruce for Planned Parenthood’s “reaction” to the March for Life. The abortion giant, she responded, accused the vice president for “pushing a radical and dangerous agenda that, they say, could leave millions without reproductive healthcare.”

On Jan. 28, during ABC Good Morning America, correspondent Gloria Riviera showed the (very small minority) of abortion supporters in front of the Supreme Court, and even interviewed one, commenting on the “cause for a lot of concern for that side.” (Again, in contrast, the networks didn’t once show the pro-lifers present at the women’s march).

Among ABC, CBS and NBC, the numbers of marchers reported by network anchors and correspondents varied widely:

And, keeping with tradition, The Washington Post downplayed the number to “thousands.”

During her remarks Friday, March for Life president Jeanne Mancini dismissed a march headcount in favor of more crucial numbers:

There has been a lot of talk about numbers over the past week. The Women’s March has talked about numbers and Facebook likes, and people keep asking me about our numbers for the March for Life. Well, it is hard to add up how many have come here over the least 44 years, but that really isn’t the point. The only number I care about, and the only number that we all care about is – 58 million. Since 1973, 58 million Americans have died as a result of abortion. We stand here today for them – for the little innocent children who have lost their lives to abortion. We also stand here for the mothers who regret their abortion decision.

ABC, CBS and NBC weren’t the only networks to significantly expand March for Life coverage, compared to last year. 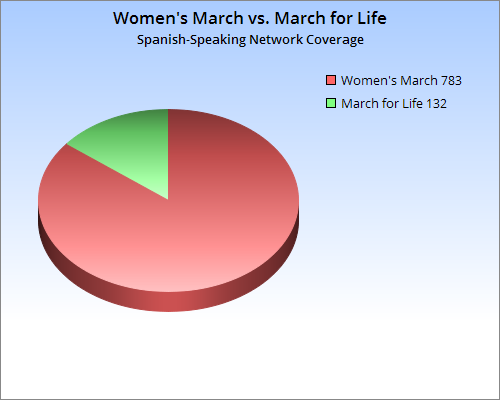 To put that in perspective, MRC Latino reported that Telemundo and Univision spent 13 minutes, 3 seconds of their national evening news on the women’s march (on Jan. 21 and Jan. 22) versus the 2 minutes, 12 seconds on the 2017 March for Life (on Jan. 27, with no coverage Jan. 28).

That means the Spanish-speaking networks covered the women’s march nearly 6 times more than the 2017 March for Life during their national evening news shows.

The broadcast networks and news outlets have long misrepresented the March for Life. In response, the Media Research Center, along with other organizations, formed an Alliance for Fair Coverage of Life Issues to demand the media “live up to the standards of journalistic integrity by covering life issues.”

On Wednesday, the alliance announced its second annual #CoverTheMarch campaign, headed by MRC President Brent Bozell and other leaders in the pro-life movement.

The alliance encourages the public to contact the networks and details the outrageous March for Life coverage in past years:

Since 2013, the networks have devoted just 100 seconds to the March for Life in following news shows – slightly more than they might have spent broadcasting a couple of burger ads.

This year, the March for Life is more relevant than ever.

This year, it’s time for the networks to stop censoring the news and to tell the truth about the March for Life.

And, it seems, they finally took note. ABC, CBS and NBC still have some catching up to do, but the pro-life movement – if any – understands the importance of baby steps.