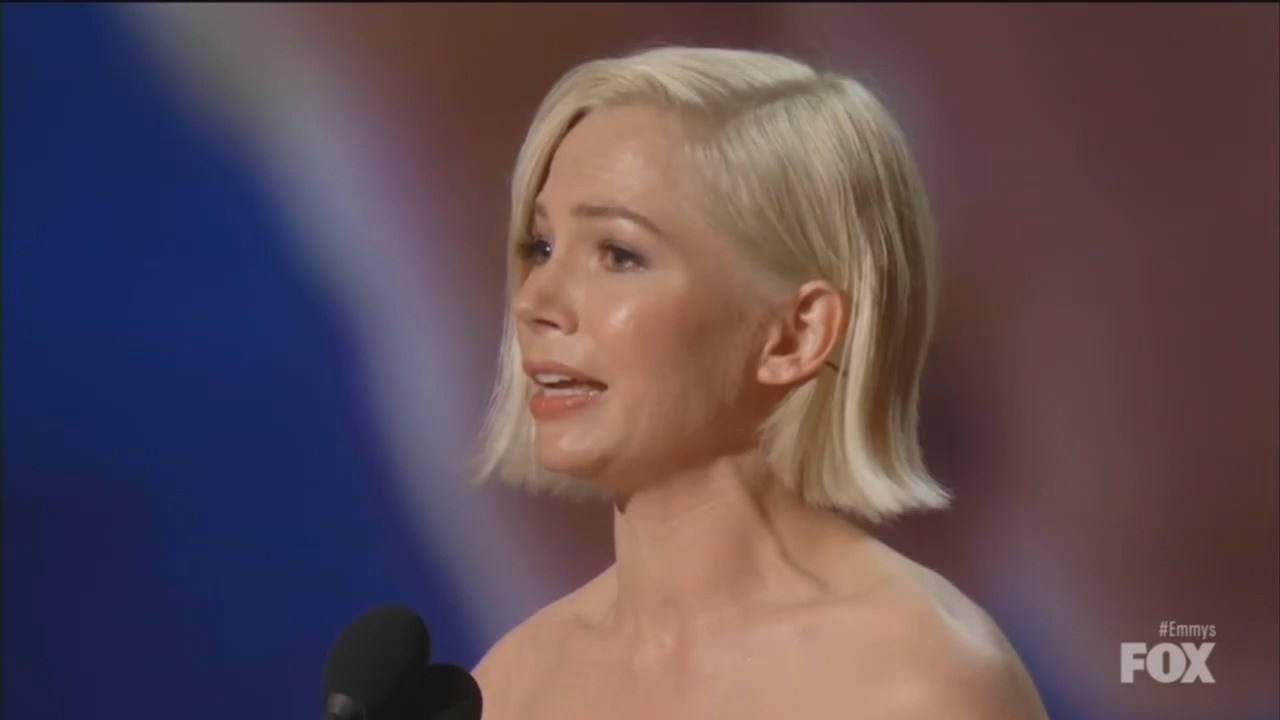 The Chairman and CEO of the Television Academy calls it the “platinum age of television.” Frank Scherma spoke about how connected television viewing makes friends and family as it is a shared experience. Mostly, though, these awards shows prove it is the platinum age of bloated egos and groupthink.

Three hours long, the 71st Annual Primetime Emmy Awards, which aired on FOX September 22, did dip into political agendas, though. There was some brief scolding by some award winners but the longest lecture came from actress Michelle Williams.

After her infamous pay gap experience, she went on about equal pay for women in the industry using the trope of women – especially women of color – receiving less pay than white male actors. She is fighting the patriarchy, you see:

I see this as acknowledgement of what is possible, this show. Sam Rockwell, I know how hard you worked. I see this as an acknowledgement of what is possible when a woman is trusted and feels safe enough to voice her needs and respected enough to be heard. When I ask for more dance classes, I heard yes. Voice lessons, yes. Hair not made out of rubber, yes. All these things require effort and cost more money. But my bosses never presumed to know better than I did about what I needed in order to do my job and honor Gwen Verdon. Thank you so much to FX and fox 21 studios for supporting me and paying me equally, because they understood. Because they understood that when you put value into a person, it empowers that person to get in touch with their own inherent value. Where do they put that value? They put it into their work. The next time a woman, especially a woman of color, because she stands to make 52 cents on the dollar compared to her white male counterparts, tells you what she needs in order to do her job, listen to her, believe her, because one day she might stand in front of you and say thank you for allowing her to succeed because of her workplace environment and not in spite of it.

Actress Patricia Arquette won Best Supporting Actress in a Limited Series for “The Act.” Still grieving the death of her transgender sibling in 2016, she kicked off the LGTBQ agenda as she encouraged the audience to hire transgendered people. She tearfully said they are persecuted and need jobs to live like everyone else.

RuPaul’s Drag Race received the Emmy for Outstanding Competition Series. RuPaul encouraged everyone to register to vote and go to Vote.gov to do so.

Billy Porter, a gay actor on the series Pose, won for Lead Actor in a Drama Series. Wearing a sparkling suit and a large asymetrical hat, he paraphrased a quote from James Baldwin about “vomiting up the filth I was taught about myself and halfway believed.” His message is that everyone has a right to be here.

Jharrel Jerome won Lead Actor in a Limited Series or Movie for his role in Netflix's When They See Us. He led a standing ovation for "the exonerated five," the five Central Park men the series was based on who were also in the audience.

There was one brief disapproving message from a British writer about U.S. immigration policy. Jesse Armstrong won for his writing on the HBO series Succession. Noting the noticeable number of British winners in this year’s ceremony, he said, “I’m quite overwhelmed, I didn’t expect that. Quite a lot of British winners. Maybe too many. Maybe you should have a think out those immigration restrictions.”

This wasn’t the most obnoxious award show in recent years, but it wasn’t politics and agenda-free, either. It landed somewhere in the middle. There is always hope that sometime the entertainment industry will get it right and just accept their awards graciously and leave us alone.