In these days of woke Hollywood, even famous people dare not outdo women. If they do, they receive the wrath of 1,000 think pieces about how poorly women are treated in Tinseltown.

Yep, Hollywood is racist and sexist and discriminates against conservatives. The media are upset by two of those. I bet you can guess which ones. But Wahlberg (nee Marky Mark) is being reviled because he did something smart. And because he’s conservative.

Here’s the crisis described in the ominous tones only CNN could muster: “USA Today reported Tuesday that Wahlberg was paid $1.5 million to reshoot his scenes, while Williams received a per diem of $80 per day, totaling less than $1,000.” Essentially, Williams agreed to work for almost nothing on All The Money In The World (see the photo) and Wahlberg negotiated a hefty payday.

In an ideal world, WIlliams's agent would negotiate better and the world would move on. But we are now in new territory and the mob has descended on this story. How dare entitled Mark Wahlberg negotiate for more than his costar.

Salon wants him to donate the money he negotiated and earned to “Time's Up or RAINN (Rape, Abuse & Incest National Network),” even though he did nothing wrong. HuffPost wrote: “Outrage Erupts Over Report That Mark Wahlberg Made Over 1,000 Times More Than Michelle Williams.” The article quoted a bunch of Hollywood celebs upset that Wahlberg was either a better negotiator or hired one.

The Daily Beast has already done two whiny think pieces. Here’s the lead to Kevin Fallon’s: “There are actually people who think Michelle Williams didn’t deserve to be paid as much as Mark Wahlberg. Let that sit in your brain for a while.” He called it, “yet another egregious injustice.” Actually, it’s her fault for agreeing.

I don’t blame WIlliams for being a team player and just trying to get the movie done. But Fallon is berserk. “Folks, Michelle Williams didn’t just deserve equal pay to Mark Wahlberg for her work in All the Money in the World. She deserved more,” he wrote. Only she didn’t. He’s a big-name star. She isn’t.

Daily Beast’s hateful loon Ira Madison III, used it as an opportunity to bash Wahlberg and dredge up much-reported misdeeds Walhberg did when he was 16 -- 30 years ago. As Madison III wrote, “Mark Wahlberg did something gross. Is anyone at all surprised?”

Let’s put this in perspective for a second. Wahlberg was a rotten teen. Madison III is a rotten adult. In July, he tweeted about Press Secretary Sarah Huckabee Sanders: “Butch queen first time in drags at the ball.” He later nominally apologized for his “ill-judged joke." But he also mocked Jeff Sessions for using an Asian-American girl as a “prop.’ That girl was his granddaughter.

That kind of sexist buffoonery was OK, though, because Madison III is liberal and Wahlberg is not. Wahlberg has played golf with Trump. He said he’s ”optimistic” about the Trump presidency soon after the election. Naturally, the left wants to destroy him.

That all takes us to the column and we’ll start with another whine about money:

Liberal Hypocrites, Episode 43,287,001,823: Imagine you work for a crazy, alt-left outlet run by one of the richest people in the world. Your day would be spent how? Bashing a rich liberal billionaire for being … rich.

That’s Splinter and their own Katie McDonough, who was exasperated that “Jeff Bezos is Obscene.” Bezos, who owns Amazon (dorkily pictured here), The Washington Post and probably a few small nations, is the now the richest person ever at $106 billion.

Compared to that, the owner of Splinter only is worth $3.3 … billion. Horrors. Our billionaire has less money than their billionaire. “Good morning to everyone except Jeff Bezos, who should be ashamed of himself,” wrote the envious McDonough.

It’s bizarre that Saban’s greedy staff embraces an “eat-the-rich” mentality working for a billionaire. This is the second time in as many months that the demented alt-lefites of Saban’s empire attacked other rich people.

Here’s would-be Antifa whackjob Hamilton Nolan in December, just before Christmas; “Sticking up a billionaire on the street for $100 is not going to do it. But one can imagine other ways that angry Americans might express their dissatisfaction with our current division of wealth: A large-scale online attack against the holdings of the very rich; yachts sunk in harbors; unoccupied vacation homes in the Hamptons mysteriously burned to the ground. Sotheby’s auctions swarmed by vandals, Art Basel attacked by spraypaint-wielding mobs, protests on the doorsteps of right-wing think tanks, venomous words directed at millionaires as they dine in fancy restaurants. People have a right to life and safety, but property does not.”

Money isn’t the root of all evil. It’s the love of money that’s problem. 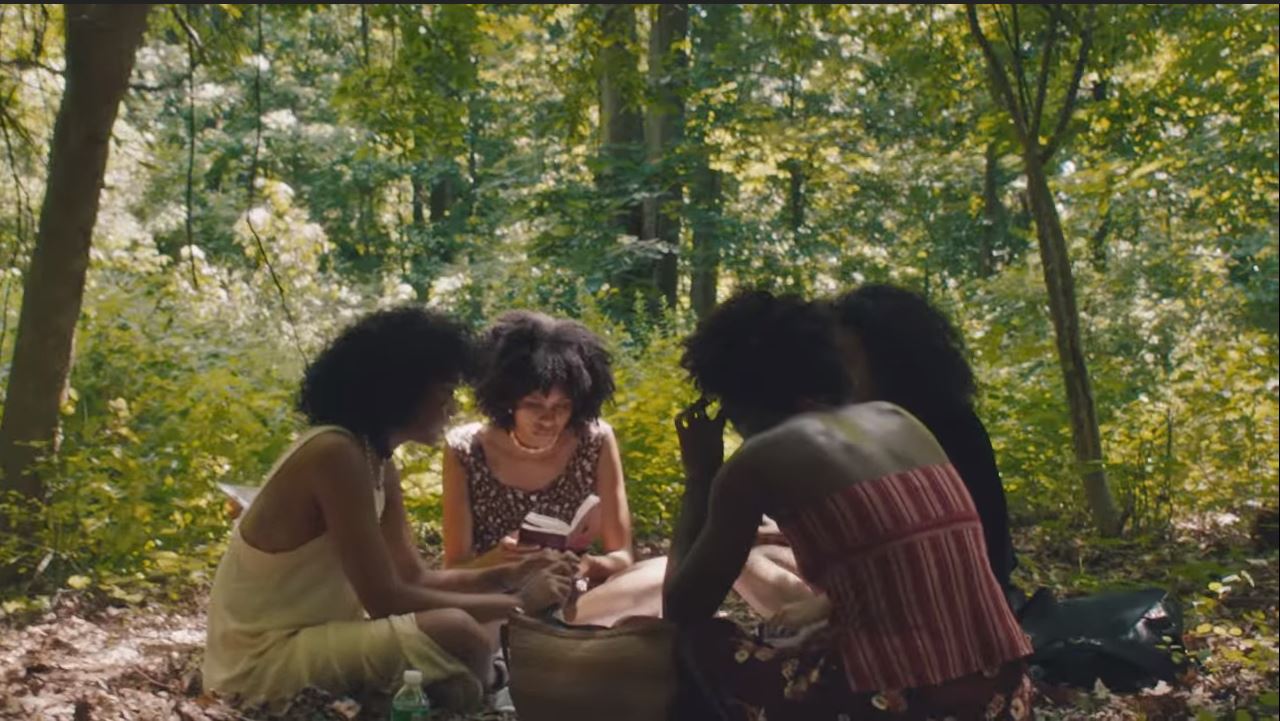 Another Day, Another Alt-Left Witch Story: The alt-left sites for women are positively obsessed with various forms of witchcraft. It’s like a spelling contest …

Today’s lesson comes from Broadly, the loony womyn site produced by Vice. (Yes, Vice recently suspended two execs including its president over sex harassment allegations. So maybe their take on women might not be ideal.) But their slogan is: “Sex, drugs, culture, politics, witchcraft.” Yes, this is allegedly a news organization.

The story is headlined: “The Young Brujas Reclaiming the Power of Their Ancestors.” It’s all about “bruja (Spanish for witch.)” (Featured in this pathetic Princess Nokia video Brujas.) This lunacy, according to Vice, is “being taken up by a growing community of primarily Latinx women and femmes who want to tap into the mysticism of their heritage, often sharing images of their practice through social media or incorporating bruja culture into their creative pursuits.” In case you want to know what Latinx “femmes” are.

The story explains that, “The practices typically involve cleansing, ancestor worship, lighting candles, and honoring the earth (through goddesses Oshun and Elegua, for instance).” Vice tells of concerns that “brujería is becoming more trendy than authentic.” Gosh, I’d hate to see that happen. It might get co-opted by lefty celebrities.

Oops, already apparently happened. “Today, bruja culture continues to grow not only in form and size, but in also in visibility. Take, for instance, Princess Nokia’s song and video ode and Beyonce’s tribute to Oshun with her golden costume at the Grammy’s last year.”

Apparently, Hollywood will ruin everything, even your coven.

Yes, Liberals Hate Israel: Liberals used to love Israel, even Hollywood did. After the Israeli raid on Entebbe to free hostages, Hollywood made two competing Entebbe movies. The stars in the first were good -- Peter Finch, Charles Bronson, even a young James Woods. The stars in the second were far bigger -- Kirk Douglas, Richard Dreyfuss, Burt Lancaster and Elizabeth Taylor.

Now check out the cast of the 2018 remake. It might be good, but hardly the A list. In large part because the left has wildly turned against Israel

A huge part of that is the BDS movement. No, that’s not a sex thing. It’s the Boycott, Divestment, Sanctions movement that is designed to destroy Israel. Here it is straight from the website devoted to this insanity, “denying Palestinian refugees the right to return to their homes.”

What the left is arguing for is letting in 5 million Palestinians into Israel and destroying it as a Jewish state. This is played out in a popular left-wing chant: “From The River To The Sea, Palestine Will Be Free.” In other words, Israel will be wiped out. Hamas, which runs Gaza, doesn’t even accept Israel’s right to exist.

That’s a bit of a long lead up to events this week when Israel banned several BDS groups since they are undermining its very existence. Shocker, they didn’t like that. Code Pink’s Ariel Gold took particular exception to being told Israel won’t let her undermine its existence.

She wrote on Alternet how, “Now, international partners like myself will be barred from standing in solidarity on the ground, where it is most needed.” She went on to claim that Zionism (the belief in Israel as a Jewish homeland) “resulted in the ethnic cleansing of Palestinians from their lands.” She probably missed the memo that Israel has a large Arab population.

Yes, liberals are whining that Israel won’t let them destroy … Israel. She admits she’s “supporting the Palestinian struggle.” This is very much the left’s attitude about communism back in the Cold War. They think it’s OK to support our enemies.