Sexual Harassment Takes Back Seat to Abortion on 'Mrs. America' 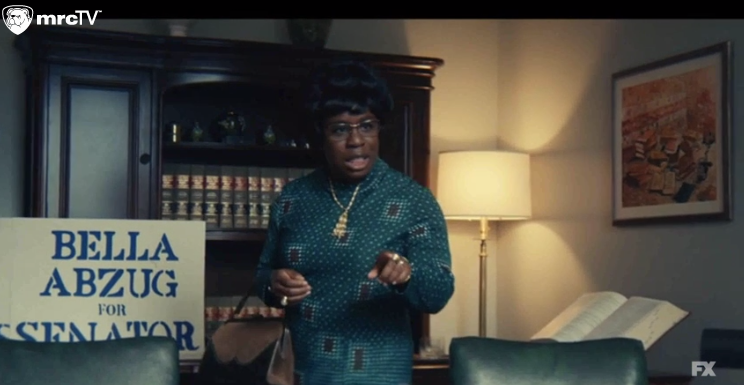 Week after week Mrs. America spins the life and likeness of conservative leader Phyllis Schlafly. But there is one subject the FX on Hulu show is surprisingly honest about: it often depicts liberal feminists prioritizing abortion over almost any other issue.

Liberal determination to enshrine a “right” to kill unborn babies appeared in multiple episodes including Wednesday’s episode “Jill,” where one prominent liberal is more concerned with keeping abortion legal than stopping sexual harassment of women on Capitol Hill.

Why? Because abortion matters more to Bella who doesn’t want to lose fellow liberal’s votes while “Jim Buckley is trying to find a way to overturn Roe v. Wade."

Shirley: ...“Congressmen are asking young women in job interviews if they engage in oral sex.”

Bella: “I feel terrible for the secretaries, I really do, but Jim Buckley spends his days dreaming up ways to reverse Roe v. Wade. I’m gonna win that Senate seat and kick his ass back to Connecticut and that’s good for all women.”

Much later, after Shirley goes public, Bella apologizes for not joining her.

Shirley and Bella’s argument over sexual harassment or protecting abortion through political power wasn’t a central theme of the May 6 episode. However, it puts the conservative grassroots movement of the time into clearer perspective.

The latest episode also focused on pro-choice Republican Jill Ruckelshaus’ (Elizabeth Banks) family drama in 1976. Her husband Billy was on the short-list to be Gerald Ford’s pick for vice president, and both are elated. When Billy tells Jill that Ford picked Bob Dole instead, Jill sadly says, “He supported the pro-life plank.”

Billy calls it a political calculation to “hold our own,” but Jill becomes emotional reading the beginning of her 1972 convention speech aloud to him. In it, she said there was “no better time to be a woman” or a Republican woman, but her tone and face show that now, in 1976 she is mourning the rise of the pro-life conservative movement.

Jill is self-described in the show as a “mouthy, pro-choice, feminist” Republican. She was one of the founders of the National Women’s Political Caucus. In 1975, President Gerald Ford appointed her chairwoman on a national commission “to honor women and urge ratification of the Equal Rights Amendment” and she has the ear of First Lady Betty Ford. Throughout Mrs. America, Jill works closely with all the liberal feminists to promote the ERA and abortion.

Earlier episodes of Mrs. America were even more aggressive about the liberal push for abortion. They made it obvious Gloria Steinem’s primary motivation for political involvement was to make sure abortion becomes legal (this episode happens before Roe). In Episode 2, she defended a pro-abortion ad in Ms. saying, until abortion is legal “we can never truly be equal.”

She also urged Democratic candidate George McGovern to make abortion part of the Democratic Party platform, and suggested he might succeed by using a less offensive term like “reproductive freedom.” To make sure he understands how much legalizing abortion means to the women’s liberation movement she said, “This is our Vietnam.”

Gloria eventually cuts a deal with McGovern’s people in order to get a floor vote on abortion at the Democratic convention, but his staff betray her during the vote.

Early in the episode, Jill appears on television as the Schlafly family watches. Phyllis points out that Jill’s supposedly bipartisan commission excludes anti-ERA and pro-life leaders. Sounds a lot like the feminist movement today and its exclusion of pro-life women.

Phyllis’s sister-in-law remarks that “there’s no place for us” in the GOP and Phyllis concurs that “the Republican Party is in peril.”

As the 1976 Republican convention looms, Phyllis wants to grow her grassroots group to 40,000. She starts looking for other conservative women they don’t already know: evangelical women, Latter Day Saints, Jewish women, Baptists and more. They failed to show her reaching out to African American churches even though she really did that, too. Was this a deliberate omission to reinforce the show’s accusations of racism against her?

One of the evangelicals Phyllis convinces to join forces is Lottie Beth Hobbs of Fort Worth, Texas, who has a large grassroots network of her own. Of course, the writers couldn’t help making Hobbs seem hateful. While she and Phyllis are out hunting deer together, Hobbs says, “Don’t you want to see every one of those perverts and abortionists burned at the stake?”

Ironically, the left’s pro-abortion obsession has been alienating many women since the 1970s. And it was part of the reason Schlafly succeeded in building political alliances between so many different religions to help defeat the Equal Rights Amendment and start to shift the direction of Republican politics.