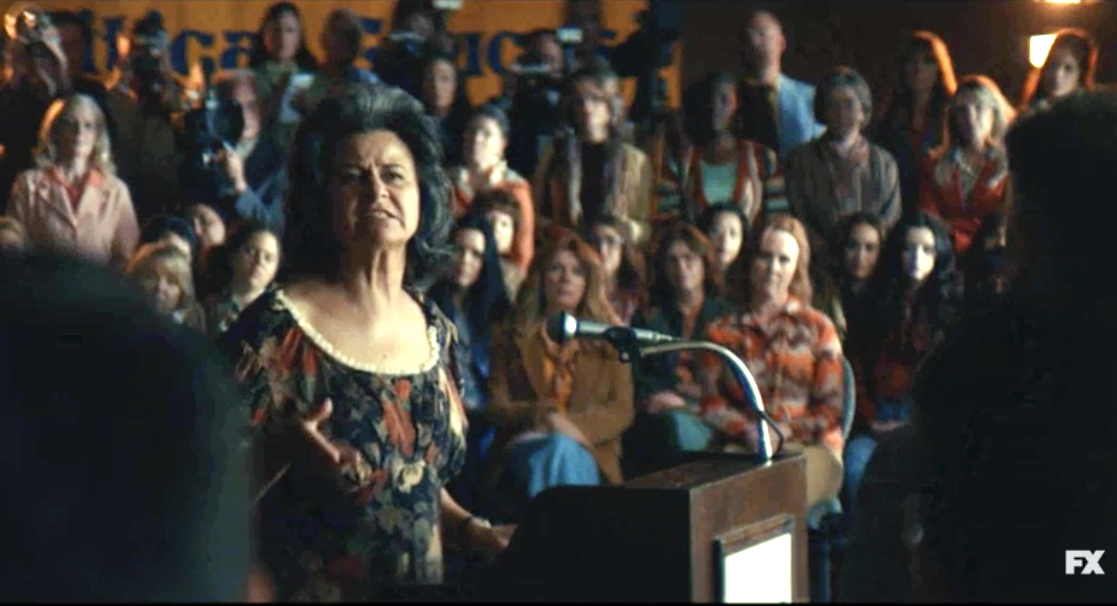 Feminist matriarch Betty Friedan may have never actually called Phyllis Schlafly “The real wicked witch of the [women’s] movement,” but that’s certainly how Mrs. America is portraying Schlafly in the new series.

In “Betty,” Wednesday's fourth episode of the FX on Hulu show, the fight between feminists and STOP ERA is raging in 1973, just after the Supreme Court ruling in Roe v. Wade. The feminists are so elated by the court ruling legalizing abortion, Friedan (played by Tracey Ullman) is the only one of who sees the grassroots conservative efforts as a growing threat.

It’s a threat she’s determined to take on personally. She even arranges to debate Schlafly (a name Betty mispronounces every time as Schofly).

On a date, Betty says, “She looks like a Barbie doll, but opens her mouth and sounds like George Wallace.”

While clever dialogue perhaps, a George Wallace comparison used to portray Schlafly as racist is a Hollywood distortion. Schlafly’s biographer said she “actively worked in the Nixon ’68 campaign and her role in that campaign was trying to persuade voters who might go for Wallace to vote Richard Nixon.”

During the debate, Mrs. America accurately features some of Betty’s most famous, vicious attacks including, “I’d like to burn you at the stake” and “I consider you a traitor to your sex. I consider you an Aunt Tom.”

However, accuracy about Schlafly’s personality or character were clearly not a concern to the show’s creators.

Accusations of racism filled the episode. At a party, Betty tells the other feminists the government ought to be investigating Eagle Forum’s funding because Schlafly “is a member of the John Birch Society” and there’s “gotta be some white sheets” in her closet.

All the others tell her there’s “no proof” and to pay no attention to Schlafly. Betty does the opposite, making a public attack accusing Schlafly of not only of being funded by JBS, adding “I believe she has ties to the Ku Klux Klan” as well.

Portraying Schlafly as being racist or tolerating racism in order to succeed had been set up in an earlier episode when a southern woman at one of the STOP ERA meetings makes pro-segregation remarks and Schlafly not only fails to take a stand against the woman, she appoints her as chapter organizer to avoid losing STOP ERA members.

According to Critchlow, painting her as tolerant of racism or racist herself was “unfounded.” He unearthed evidence her grassroots movement reached out to black communities and black churches. He also went through massive amounts of Schlafly’s files and correspondence.

“I did not find a instance of people raising racial issues. Indeed, I found a lot of discussion about reaching out to black churches. So I didn’t find a record of that. That’s not to say that some people, some of the activists, and I think some of the activists might have had racial feelings and that they opposed desegregation earlier, but not at that point,” Critchlow said.

He acknowledged there were women in some Southern chapters who had connections to JBS or opposing desegregation, “But this was a clear, clear minority.” According to a recent attack by The Daily Beast, documents appeared to show Schlafly was a member of JBS before 1964. Even if true, that connection was severed many years before 1973 and it certainly does not prove the group had financial ties to her STOP ERA efforts.

As for the wild KKK allegation, Critchlow said in reality one Illinois KKK chapter came out against the ERA and claimed to be working with Schlafly but she “repudiated” them. That was far different from Mrs. America's take on the issue.