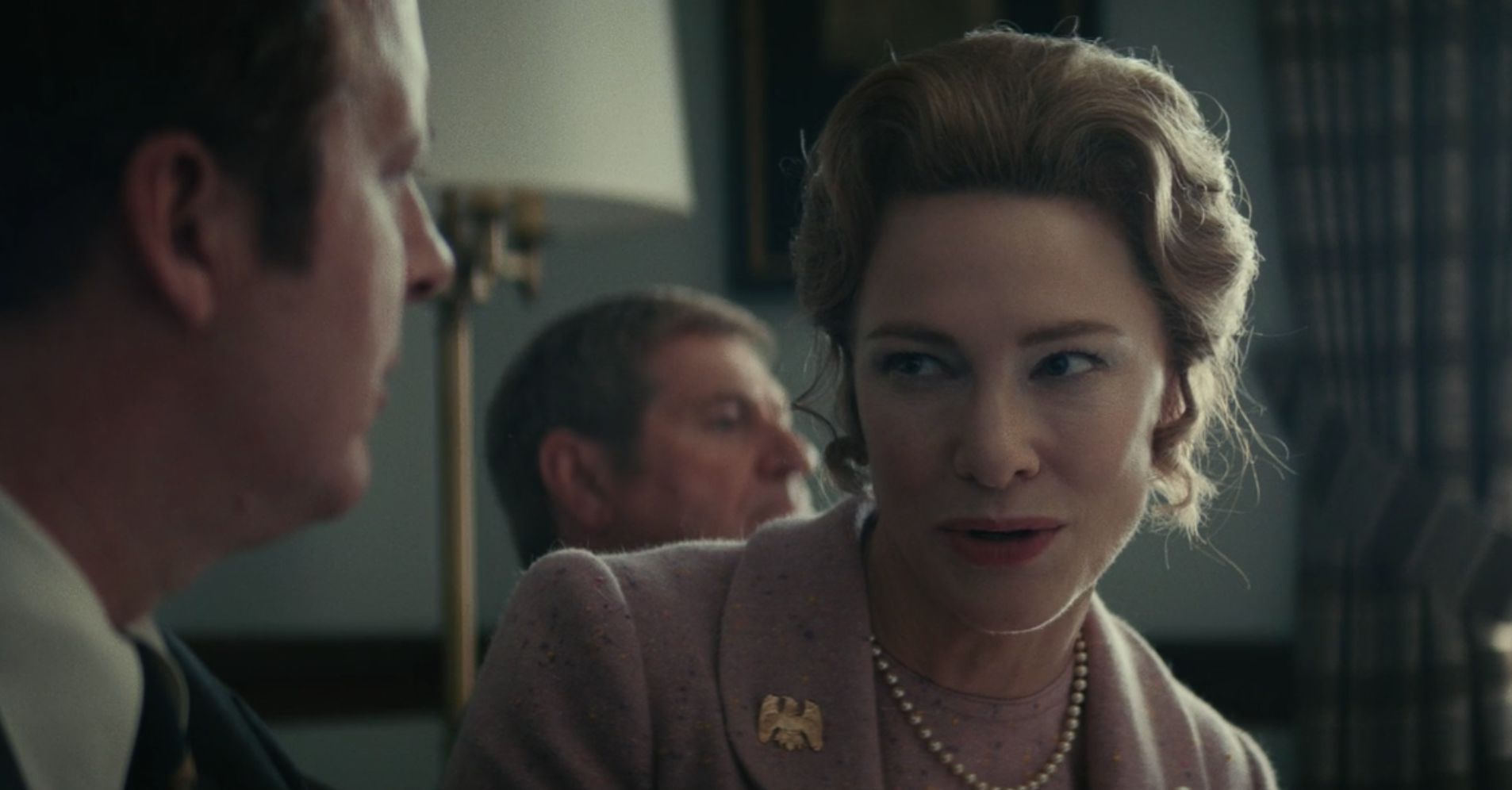 Eagle Forum founder Phyllis Schlafly remains a heroine to many conservatives. Clearly, she is not to the makers of Mrs. America, which debuted on FX on Hulu Wednesday.

From the start, Schlafly is shown pretending. She pastes a smile to walk a runway in a red, white and blue bikini at a Republican fundraiser. Once she’s safely facing backstage, the phony smile is dropped.

Throughout the first three episodes, Cate Blanchett’s portrayal makes Schlafly seem intelligent, but also cold and desperate to have a voice in the male-dominated political universe. In multiple scenes she becomes annoyed when others try to steal her spotlight or take credit for her activism.

Watching the show trailers, Schlafly’s daughter Anne Schlafly Cori told Vanity Fair it was “clear to me that Cate Blanchett misunderstood my mother; her acting is cold, cruel, and calculating. Phyllis Schlafly was warm and gracious and her beliefs were sincere. Women idolized Phyllis Schlafly.” Cori reached out to the producers to talk about her mother, but they never responded. The show creators told the magazine they didn’t want to become “beholden” to anyone’s version of events.

However, Schlafly is not meant to be the “hero” of Mrs. America, despite her real-life victory over the Equal Rights Amendment. She’s the “antihero,” according to series creator Dahvi Waller. Waller was drawn to her “extraordinary” impact on politics, not her ideology. Blanchett has also been open about her disagreement with Schlafly’s politics. Liberal reviewers went further, labeling Schlafly the “villain.”

The show begins with Schlafly, an incredible woman whose activism eventually defeated the ERA and who earned the nickname of “first lady” of the conservative movement. However, it paints her motivation for speaking out against ERA as an effort to finally garner attention for herself.

She is initially shown as disagreeing with, but dismissive of the Equal Rights Amendment. It isn’t until she’s trying to speak with condescending Republican legislators in Sen. Barry Goldwater’s office about communism and nuclear threats and getting nowhere, that she bursts out with criticism of the “fraudulent” amendment.

“Section 2 states the Congress shall have the power to enforce by appropriate legislation the provisions of this article. Now if the ERA passes, it will give the federal government a massive amount of power. I mean, are we no longer the party of limited government and states rights?” Schlafly asks.

One of the congressman says they “have” to give the women’s movement something. She counters, “I think you’ve given them plenty. You’ve already given them the Pay Equity Act and Title 7 of the Civil Rights Act, both of which I supported, not to mention women are already protected against discrimination by the constitution by the Equal Protection Clause under the 14th Amendment.”

Afterwards, she returns home to Illinois and tells her husband, she’s not going to run for Congress because “Washington is broken.” She's going to stay home and “shake things up” with grassroots efforts instead and soon she’s telling crowds of ladies the problems of the ERA.

Mrs. America dramatizes the political fight of the 1970s, and specifically the battle lines over the Equal Rights Amendment, with Schlafly and her grassroots army of conservative women and housewives on one side, and the feminists of the women’s liberation movement on the other. Each episode focuses on one woman, but weaves the others in and out.

Although shown in each episode, Rose Byrne’s Gloria Steinem is more fully introduced in episode 2, as a celebrity and a fierce advocate for legalizing abortion. She’s also the “pretty face” the liberals need at the forefront of the women’s liberation movement.

Cameras flash as she struts into a launch party for Ms. Magazine at the Guggenheim. Reporters ask if she’s worried about alienating middle America’s women with the magazines provocative abortion ad. She dismisses the concern, asserting “until we have that right we can never truly be equal.”

Byrne’s portrayal is often warm and she’s even gracious toward Betty Friedan (Tracey Ullman) after being publicly insulted by Betty. When a woman stops her on the sidewalk and asks her to sign the abortion ad from the first issue of Ms., Gloria realizes the woman had an illegal abortion. When the woman starts crying, Gloria reaches for her arm to comfort her.

Throughout the show, Gloria’s feminism is on display with rants against the “patriarchy,” describing ERA opponents as “brainwashed” by men. She also makes it clear the women's movement will push forward its liberal agenda with or without all women.

Episode three focuses on Rep. Shirley Chisolm’s run for president. Uzo Aduba portrays Chisholm, the first African American woman ever elected to Congress. She ran for the Democratic nomination for president in 1972, which was ultimately won by George McGovern. She’s shown as a strong and integral member of the women’s liberation movement, until the convention -- when political calculations and competing priorities start to fracture the feminist sisterhood.