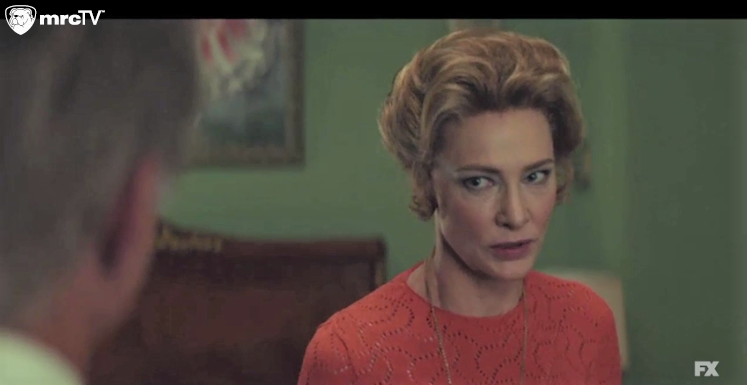 On one side, conservatives Fred and Phyllis Schlafly’s marriage.

On the other, the “equal marriage” between liberals Brenda Feigen Fasteau and Marc Fasteau. Marc (played by Adam Brody) describes their marriage as “forged in the crucible of feminism so we don’t have assigned roles.” Marc is so “enlightened," he supports Brenda even after she confesses she’s carrying on a lesbian extramarital affair.

However, to prop up this false contrast, the show mischaracterizes the Schlaflys’ marriage.

Anne Schlafly Cori, Fred and Phyllis Schlaflys’ daughter, said the show is riddled with inaccuracies about her parents from the trivial (Phyllis didn’t play piano), to serious distortions about their relationship. She told me her father fully supported her mother and “relished her accomplishments.”

This week’s episode, “Phyllis & Fred & Brenda & Marc,” Cori said was “awful” to her father. It falsely labeled him an “estate” lawyer (he was a corporate lawyer) and portrayed him being demoted and kicked out of his law office (something she said couldn’t have happened).

It also portrayed the Schlafly marriage as increasingly contentious as Fred becomes jealous and frustrated by his wife’s growing fame.

“They did not have a contentious marriage and did not have a quid-pro-quo marriage,” Cori told me. Referencing an argument between Fred and Phyllis in the episode, Cori added that her mother “would not have argued that she was finished raising his children. For them, the family and the work was a joint effort.”

Early in the episode, Fred is profiled by a newspaper and wounded when the headline reads “Phyllis Schlafly’s lawyer husband opposes abortion and communism.”

Not only was he not upset, Cori recalls her father enjoyed being called “Mr. Phyllis” by the Alton Telegraph. “He had a great sense of humor and loved it.

Mrs. America’s version of the couples debate was also heavy on spin. Part of the dialogue was borrowed from a 1978 interview the Schlaflys did with Good Morning America (Video can be found here), but delivered in a completely different manner.

In the fictionalized debate, the television host asks Fred if Phyllis “wears the pants” in the family, Fred says he’s “physically larger than she is” and she’s “very submissive.” He comes across as a patriarchal jerk. The submissive line surprises Phyllis who shoots him an unhappy look, but adds, “Well, Fred is the boss of the family” when the host seems dubious.

This was not at all how it happened on Good Morning America, when the couple were warm, jovial and laughing together throughout the conversation. Fred’s “submissive” remark is delivered with a warm grin and clearly meant as a compliment, not an assertion of power.

Phyllis also didn’t end her statement where Mrs. America cuts it off. She praised her 30-year marriage as “more fun,” than her public life. “You talk about some of the other things I’ve done, and some of them have had pleasurable aspects to them, but really nothing is as much fun as a happy, long-time marriage and the fun of growing children. It really is more fun than all these other things I do,” Schlafly said.

In the same interview, both Schlafly’s said they generally agreed on important matters and when asked if Fred was supportive of her work on various issues she said yes, “In every way.”

The FX on Hulu show painted a very different and misleading picture. It visually telegraphed the winners and losers of its sham marriage battle royal as it follows the couples leaving the televised debate.

As Phyllis leaves the stage, she’s walking steps ahead of Fred, angry and practically scowling. Behind them, Brenda and Marc walk beside each other in sync, sending smiles and at each other.

In the Schlafly’s room, they fight over the debate and over Phyllis’s decision to go to law school. When Cate Blanchett’s Schafly sneers at Fred for only doing “estate law,” when he could have done more for his country with his law degree, Fred leaves the room angry.

Cori found this scene “really obnoxious.” In reality, Fred’s initial reaction was that Phyllis didn’t need to go to law school, but Cori said he quickly reversed and encouraged her to go to law school to build her case against ERA.

Meanwhile Marc and Brenda congratulate each other for their debate performances, Marc says, “We make a great team,” before asking her if she’s in love with Jules. Brenda says she doesn’t know, she’s “confused,” but “I really love being with a woman.” Marc calmly and gently asks, “More than me?”

“I’d never love anyone more than you,” Brenda says as they embrace. Marc accepts her redefined sexuality saying, “What if you didn’t have to be this or that. What if there’s another way? Isn’t that the point of living a radical life?” Later in the episode, Marc and Brenda are all smiles as they tell Gloria Steinem and her boyfriend that they’re expecting a child.