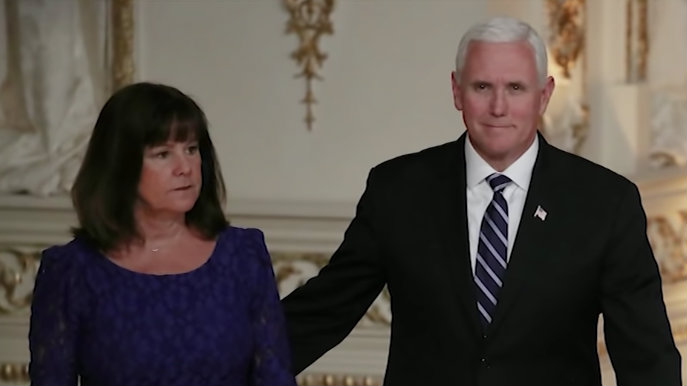 For the media, this is beyond the pale!

On Wednesday, it was announced second lady Karen Pence is taking a new job at Immanuel Christian school in Springfield, Virginia. It might have been ok if the school were just nominally Christian or one of those boneless denominations that hold bake sales for transgender Boy Scouts and give students extra credit for attending anti-gun marches. But Immanuel knows Heather doesn’t have two mommies and, even if she did, they would never be “married.” It’s not about to pretend otherwise. In fact, it has an explicit code of conduct for students and employees that positively frowns on the freaky stuff the left finds so admirable these days.

The Huffington Post zeroed in on the policy. Of course, asking a liberal to find something to complain about at a Christian School is akin to putting Bryce Harper in a phone booth with a giant pinata and a Louisville Slugger. The code reads:

Moral misconduct which violates the bona fide occupational qualifications for employees includes, but is not limited to, such behaviors as the following: heterosexual activity outside of marriage… homosexual or lesbian sexual activity, polygamy, transgender identity, any other violation of the unique roles of male and female.

The policy also proscribes pornography and sexual harassment. The school invites new students, parents, and employees to agree to uphold Immanuel’s understanding of “biblical morality” before they complete the application process. It’s their choice.

But to Huffpo, the school “bans LGBTQ employees and kids,” and therefore contributes to America’s “bigot" problem. Who says reasoned discourse is dead?

One of CNN's own distinguished employees jumped in on the action, you know, by putting out some more routine slander of Mrs. Pence. CNN reporter Kate Bennett retweeted the Huffpo story, captioning it with, “So, lemme get this straight, the second lady of the United States has chosen to work at a school that openly discriminates against LGBT adults and children.” Seems really fair, huh?

CBS reporter Grace Segers responded sympathetically to Bennett’s tweet, acknowledging that it is “common” for private schools to include “an anti-LGBT rider for employment,” and agreed that it’s not becoming of a second lady for her to choose “a school that bans homosexuality.” She also added that there needs to be more “awareness of the widespread issue.” What, that Christian schools are Christian?

Yeah, here’s just another transparent attempt of the liberal media to attack private institutions (and Pence family members) whose very existence pisses them off. It’s not about free speech or citizens’ rights, because if they had any respect for those, they’d stop breathing down the necks of private schools. But really, it’s just more evidence that the left hates Christianity, and by extension the Pence family.