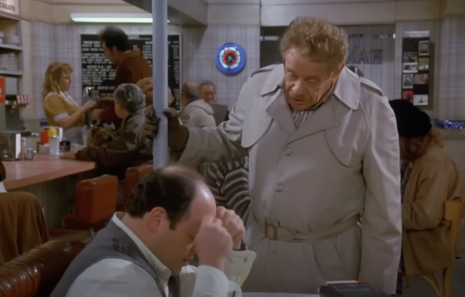 Happy Festivus, everyone! This year marks the 25th anniversary of the famous Seinfeld episode, so let's grab our aluminum pole and air MRC's annual television grievances.

This first grievance is a regular on our list and is getting worse with each passing year. The radical LGBTQUIA movement needs to stop sexualizing kids.

The year began with an 8-year-old character on Law and Order: SVU, telling his mom, Detective Olivia Benson (Mariska Hargitay), that he is bisexual. Benson is proud of her son for being so open with her, as though a prepubescent child is sexually aware enough to publicly declare himself bisexual.

In the world of reality television, Discovery+ streaming service premiered Generation Drag in June. In the reality series, children as young as 12 competed to be the top drag queen in a competition called "Dragutante." Many of the vulnerable children in the series had been groomed from an even younger age than that.

In fact, Hollywood may as well call Pride Month "Groomer Appreciation Month" at this point since so much LGBTQ entertainment content during the month of June was geared towards underaged audiences.

Disney then targeted a shockingly young audience with Baymax, a series of preschool shorts that included a romantic relationship between two men and promoted the idea that men could have periods.

Disney may be one of the biggest offenders, but it is far from the only one. As the Children's and Family Emmys made clear at year's end, LGBTQUI content is now a major focus of the children's television industry.

The Children's and Family Emmys was far from the only politically charged awards show this year. Left-wing rants and attacks marred awards ceremonies throughout 2022.

At the Oscars, the unfunny hosts attacked "unbearable white women." At the MTV awards, entitled singer Lizzo complained about being oppressed. At the Tony Awards, Broadway stars fixated on race and gender identities.

In May and June, many of the ceremonies also pushed pro-abortion messaging as the Dobbs decision was due. The Billboard Music Awards had a cute, but clearly confused child mouthing pro-abortion rhetoric. The BET (Black Entertainment Television) Awards dispensed with any subtlety at all with singer Janelle Monáe yelling "Fuck you, Supreme Court!"

Television dramas also threw subtlety out the window when pushing a pro-abortion agenda this fall. NBC's Law and Order painted pro-lifers as violent murderers. CBS's FBI: Most Wanted showed an abortion clinic under attack by a patient who could not get an abortion due to new pro-life state laws.

Not a single show dramatized a crisis pregnancy center or pro-life office being attacked despite the fact that Jane's Revenge, a violent pro-abortion terrorist organization, routinely targets them.

There was a notable exception to television's anti-white attacks - the vilification of white police officers on network cop dramas diminished in 2022 compared to the previous BLM years. Scriptwriters lost interest in the "white cops are evil" arc after real violent crime and homicide rates went through the roof across the United States. The change is not exactly a Festivus Feat of Strength.

For a genuine Festivus Feat of Strength, we can thank the Country Music Awards. The CMA's did something almost unheard of among 2022 awards ceremonies -- it entertained, and celebrities acted normal. No politics, just music and love for one's country.

Nods for Feats of Strength also go out to ABC's The Good Doctor and CBS' s FBI for surprise pro-life episodes.

The Good Doctor, which has had pro-life episodes in the past, praised parents who rejected "selective reduction," a euphemism for abortion of multiples.

CBS's FBI used the word "baby" when talking about an unplanned pregnancy. (At the end of the season, the pregnant character announced that she intended to keep her child.)