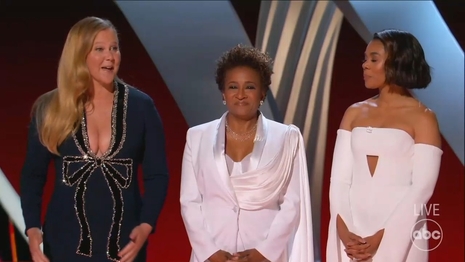 Schumer: This year the academy hired three women to host because it's cheaper than hiring one man. [Applause] It's fun, right?

Hall: You right. You're right. Right. But I'm still excited to be hosting, representing black women who are standing proud.

Sykes: And I'm...And living out loud.

Schumer: Yes. And I am representing unbearable white women who call the cops when you get a little too loud.

The show was barely five minutes in before the hosts were already driving away anyone who had been foolish enough to give it a chance. Having attacked white women, the trio then went after "toxic masculinity" and Republican Senate Minority Leader Mitch McConnell (R-Ky.).

Hall: You know, this year we saw a frightening display of how toxic masculinity turned into cruelty towards women and children.

Hall: I know. I know. But you know, I was actually talking about "The Power of the Dog."

Sykes: Oh, yes. [ Applause ] I watched that movie three times and I'm halfway through it.

Hall: One more week and you're in there.

Sykes: Stay with it.

Schumer: Stay with it.

Well, at least they admit nobody can bear watching best picture nominee The Power of the Dog, which Sam Ellliot rightfully called "a piece of shit."

The whole awful monologue could not end, of course, without a stab at Florida's anti-grooming law, "The Parental Rights in Education Act," which protects children in kindergarten through third grade. Hollywood is a big fan of child grooming, so naturally they hate it.

Sure, Florida parents are just afraid of the word "gay," not adults sexually indoctrinating their prepubescent children without their consent. You keep telling yourself that ladies.

This was all before getting through the first ten minutes of the show. Any viewers who hang on for four more hours with these unbearable hosts must be masochists.