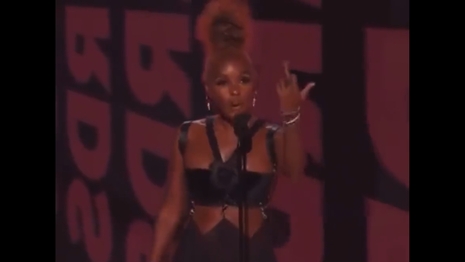 The push for legalized abortion in the United States has a long, racist and eugenicist history, but that didn't stop celebrities at the 2022 BET (Black Entertainment Television) Awards from attacking the Supreme Court's decision overturning Roe v. Wade.

How is being allowed to kill a baby in the womb a sign of female "power?" Henson has a warped perception of womanhood.

The show got worse when singer and presenter Janelle Monáe took the stage. Monáe, who formerly identified as bisexual, then pansexual, and now "non-binary" said, “I’d like to give a special, special shoutout to black women, to black queer artists, to black nonbinary artists, these artists making art on our own terms, owning our truths and expressing ourselves freely and unapologetically in a world that tries to control and police our bodies, my body, and our decisions, my decisions."

The sexually confused singer then put up her middle finger and yelled, "Fuck you, Supreme Court!"

And so it went, with the audience enduring multiple lectures about abortion. As Variety noted, "In the show’s first half hour, nearly every woman who took the stage commented on the issue."

When Jazmine Sullivan, winner for Best Female R&B-Pop artist, accepted her award she encouraged men to talk about all the ways abortion "benefited" them.

Sullivan: Thank you all. I love you too. I love you too. As always, I do this for the women — for my sisters especially. It’s a hard time right now for us, and I want to speak directly to the men: We need y’all. We need y’all to stand up. Stand up for us, stand up with us. If you have ever benefited from a woman making one of the toughest decisions of her life, which is to terminate a pregnancy, you need to be standing with us. This is not just a woman’s issue. This is everybody’s issue, and we need your support more than ever — okay fellas? Y’all got us?

Sullivan: Because we’ve got y’all. Y’all got us?

Sullivan: All right. Thank you so much.

Well, first of all, what is a woman? Also, I heard men can get pregnant. Representatives of Planned Parenthood, which now offers transgender hormone therapy, have said so repeatedly.

And Sullivan seems not to realize that hearing the ways irresponsible men have "benefited" from abortion does not make the pro-abortion side look good. But go ahead and take Sullivan's advice, pro-abortion men. Tell us about a time or times you impregnated a woman and handed her money for an abortion rather than take responsibility for a child you helped create. After all, for decades the pro-life movement has been highlighting ways "pro-choice" men pressure vulnerable pregnant women into abortion.

A recent Trafalgar Group poll showed that a majority of black Americans favor banning all or most abortions. But black entertainment, like Hollywood entertainment in general, pushes hardline leftist views on the public as though narcissistic singers, actors, and other "artists" speak for all.

Luckily, they don't speak for the current Supreme Court or the millions of Americans from all backgrounds who fought for the end of Roe v. Wade.