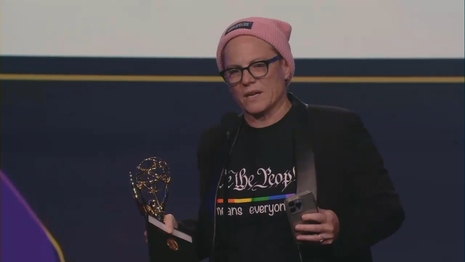 During the two-night ceremony, so many speeches and awards focused on LBGTQ messaging that one could be forgiven for thinking it was actually a show about gay television programming.

Bestowed by the National Academy of Television Arts and Sciences, the Children's & Family Emmy Awards was the first ever awards show to specifically honor entertainment for ages "infancy to age 15."

Saturday night's ceremony was hosted by JoJo Siwa. Siwa is a YouTube and TikTok star who has variously described herself as "pansexual," "gay," and "queer." Early in the show she referred to herself as "a gay icon."

Her statement would set the tone for much of the two nights, because if there was anything these television creators wanted the audience to know, it was that sexual and gender identities were really, really important to talk about in children's programming.

Sesame Street's "Friends with a Penguin" won for best original song. The song was originally sung on Sesame Street by cross-dressing LGBTQ celebrity Billy Porter. Porter wore an evening gown for that episode while singing about his unusual friendship with the bird. Upon receiving the award, song composer Kathryn Raio-Rende gave a shout-out to "all the LGBTQUIA kids."

Kristi Reed, winner of Outstanding Voice Direction for an Animated Series for her work on Netflix's CentaurWorld, talked about being a "queer kid from a small town" and said, "We have the power to create programming that elevates all voices, erases generations of hate and tells the bullies of the world to suck it."

CentaurWorld was also nominated for a GLAAD (Gay & Lesbian Alliance Against Defamation) Media Award earlier this year, and much of the Children's and Family Emmys winners dovetailed with previous GLAAD nominees.

Muppet Babies won for Outstanding Writing for a Preschool Animated Program and the Children's and Family Emmys highlighted its infamous "non-binary" episode "Gonzo-rella." In that episode, Gonzo experimented with "gender expression."

Muppet Babies Story Editor and Co-Producer Robyn Brown thanked numerous people at Disney Junior "who risked more than you would believe to allow us to tell the story."

It actually takes a lot more courage nowadays to tell a story about kids who just want to be kids in a world where powerful adults refuse to respect age-appropriate boundaries.

Sesame Street also won for Outstanding Preschool Series. Of course, the ceremony showed a clip from the Sesame Street episode "Family Day" in which a character introduces "her brother Dave and his husband Frank."

On the second night of the ceremony, Heartstopper also won Best Young Teen Series, among other awards.  For that win, the ceremony showed a scene of the two lead teen males kissing.

"Most of all, with Heartstopper we wanted the next generation of LGBTQUIA kids to see themselves in a story about queer joy, about love and about acceptance," Heartstopper's Executive Producer Patrick Walters told the audience.

When the ceremony was not talking endlessly about queer and gay affirmation for children, it pushed other political and ideological agendas.

Elizabeth Ito, the executive producer of Netflix's City of Ghosts, claimed the land on which she was receiving her award should be returned to indigenous peoples.

But those other political moments were relatively minor compared to the larger, over-arching message of the Children's and Family Emmys. That message was that minors are now a primary television target for the marketing of sexual and gender identities.