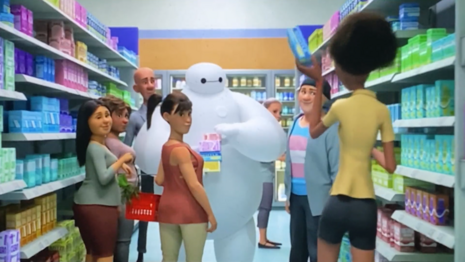 Disney is proving determined to destroy its brand and the memory of all its beloved characters with it.

In the scene, the lovable inflatable robot Baymax is inexplicably searching for feminine hygiene products.

A group gathers around him with recommendations. The group includes a person who looks like a man, or trans-man, who is wearing a shirt with the colors of the transgender flag. He hands Baymax a box of maxi-pads and says, "I always get the ones with wings."

EXCLUSIVE: I've obtained leaked video from Disney's upcoming show "Baymax," which promotes the transgender flag and the idea that men can have periods to children as young as two years old.

It's all part of Disney's plan to re-engineer the discourse around kids and sexuality. pic.twitter.com/y1ATnKCEce

In its drive to feed the psychological delusion of transgenderism, the left pretends that biological realities like ovulation and pregnancy are not unique to womanhood. This new show helps to subtly indoctrinate children with that twisted lie.

In March, Rufo leaked video of Disney staff bragging about their "not-at-all-secret gay agenda." Baymax is the company's latest attempt to confuse children.

Even beyond the trans agenda, the scene with Baymax is just plain odd for a kids show.  It represents feminist obsessions with talking about menstruation regardless of the appropriateness of time or place. Did leftists grow-up with parents who never privately talked to them about puberty or natural bodily functions? Why do they believe children's entertainment must do that job instead?

When the movie Big Hero 6 premiered in 2014, a generation of children fell in love with the funny and adorable character of Baymax. But the woke ruin everything, and now, the marshmallow-like robot is the latest creation to be used for radical leftist manipulation of kids.

Rufo noted in a follow-up tweet, "Disney's stock plummeted by $40 billion, its favorability rating dropped from 77 to 33 percent, its new Buzz Lightyear film was a massive flop, and Ron DeSantis stripped the company of its special privileges. It's been a rough year for the Mouse."

Disney's stock plummeted by $40 billion, its favorability rating dropped from 77 to 33 percent, its new Buzz Lightyear film was a massive flop, and Ron DeSantis stripped the company of its special privileges. It's been a rough year for the Mouse.

With each new offense to common sense, one hopes Disney's year only gets rougher.