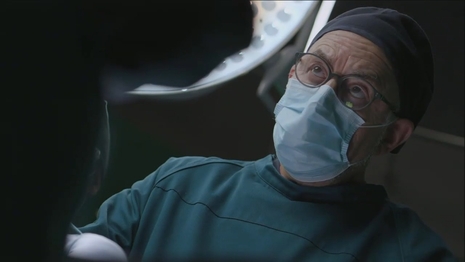 Television has been pushing the pro-abortion agenda hard this fall, but every now and again a pro-life script slips through the cracks.

Monday night's episode of ABC's The Good Doctor surprised with a narrative about a very high-risk pregnancy that celebrated life.

In the episode, "Boys Don't Cry," St. Bonaventure Hospital prepares for the delivery of a high-risk multiples pregnancy.

The mother had been prescribed clomiphene, a medication that stimulates ovulation to treat infertility. It worked too well and she unexpectedly conceived six children.

The team at the hospital delivers the six babies and begins the work of saving the infants who were most at-risk during the pregnancy.

While in surgery on one of the preemies, Dr. Jordan Allen (Bria Samoné Henderson) praises the parents, Gena and Jack, for choosing to keep all six babies. Her colleague,  Dr. Aaron Glassman (Richard Schiff), criticizes them for refusing to "selectively reduce," a euphemism for abortion:

Glassman: We might throw that word around just a little too easily.

Allen: Think of the risk they took, bringing six new lives into the world.

Glassman: Refusing to selectively reduce is what got us here in the first place. Delivering 11 weeks pre-term is a little bit less than ideal.

Allen: Like Dr. Andrews says, we're going to beat the odds and save them all.

Glassman: Well, if we pull that off, then we are the heroes.

Glassman and Allen further disagree when monitoring the infant post-surgery. The child's recovery is precarious and Glassman is pessimistic about whether or not the baby will make it. Allen remains positive.

"As long as she's breathing, her heart is beating, her brain is functioning, there's still hope," Allen says.

In the end, all six babies survive with good prognoses for their future. They go home with their joyful parents. Dr. Glassman thanks Dr. Allen for "helping me to not give up on hope."

While the show celebrated life, it unfortunately also catered to some selfish notions about the rights of children. During the episode, a gay male couple talked about having children without ever asking if it would be unfair to intentionally deprive a child of a mother. A single female doctor looked through sperm bank donors with no concern about deliberately depriving a future child of a father.

Sadly, a child's need for both a mom and a dad has long been portrayed as irrelevant in television shows and pop culture in general.

But at least a child's right to life was honored in the episode. In a post-Roe world in which Hollywood is pushing the pro-abortion agenda more intensely than ever, such a script is unique.