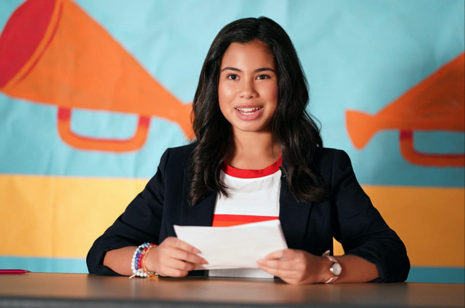 Keep your young daughters away from Disney+'s original programming. That is all I can think after watching the second season of the cringeworthy Diary of a Future President, newly streaming on Disney+.

If your daughter willingly takes in this series' left-wing feminist and LGBTQIA propaganda, she will learn how to be an ideological robot. The show's full 10 episode second season premiered on Wednesday, August 18, and is even more insufferably woke than the first. The tween girls in the show replace fine English words like "hero" and "history" with "shero" and "herstory." Instead of saying, "Oh my God," they say, "Oh my goddess."

The lead character in the series, Elena Cañero-Reed (Tess Romero), is destined to one day be president of the United States. But for now, she is a seventh grader who participates in a middle school musical with dialogue that includes, "Who needs a husband when you have a project?"

Elena plays a tree in the middle school play, but her best friend, Sasha (Carmina Garay), snags the lead. Sasha sings songs with titles such as "Why Can't Feminism Happen Already?" The lyrics to this original song composed by the drama club teacher include, "Why can't feminism happen already. It's my greatest wish. But it's a bummer because of my gender. This desire will be dismissed."

And, while working on her campaign speech for student representative, Elena draws inspiration from Ruth Bader Ginsburg. If you only looked at Hollywood shows, you would think no woman besides Ruth Bader Ginsburg had ever been appointed to be a Supreme Court justice. Needless to say, Elena never thinks about Justices Sandra Day O'Connor or Amy Coney Barrett.

While Elena is fighting for feminism, her closet homosexual brother, Bobby (Charlie Bushnell), finds out that he's been named "Mr. Manatee" for his high school dance. The high school freshman chosen "Mr. Manatee" by the school is the equivalent of a freshman prom king and the winner usually picks a Ms. Manatee to take with him. Being secretly gay (he comes out later in the season), the "date" issue worries Bobby.

Elena tells him, "The entire ritual is archaic, not to mention heteronormative, of course. It was founded by Swansby [a historically prominent citizen of the town], the face of misogyny whose legacy I'm trying to erase."

Elena's rant gives Bobby an idea. He writes an anonymous letter in the school paper criticizing the popular Mr. Manatee tradition as an "archaic heteronormative ritual." The school gets rid of "Mr Manatee" altogether.

But, frankly, if aliens from outer space came down and watched this show, they would presume same-sex relationships were the norm on earth and heterosexuality was far less common. The homosexual brother kisses a guy on screen. (Disney+ has been pushing teen gay kisses on its shows a lot this summer.)

One of Elena's middle school classmates “parent traps” his “two moms” to get them back together. Camila, the lesbian best friend of Elena’s mother, spends much of the season preparing her marriage proposal to her girlfriend. The proposal is greeted with a passionate lesbian kiss. (While the show’s main character is a middle schooler, its target audience is prepubescent girls.)

When not promoting feminist and LGBTQIA agendas, Diary of Future President promotes the Marxist agenda of tearing down statues, traditions and the past. Elena has been fighting since season one to remove the school's mascot, "Swansby," because she discovered the original Ogden Swansby mistreated women who worked for him. A statue of Ogden Swansby also stands in the school hallway. After agreeing to her petition for removal of the Swansby mascot, the school removes the head of the Swansby statue, as well. Seeing the decapitated statue upsets Elena's classmate, Tripp Swansby (Brogan Hall), the great-great-grandson of Ogden. Tripp becomes determined to defeat Elena in her race for student rep.

Tripp's pained feelings at seeing the decapitated statue of his ancestor are portrayed as invalid. He is the villain in the show. A rich heterosexual white boy who is insufficiently progressive and a selfish obstacle to Elena's political empowerment.

In other words, this entire show is just more unwatchable woke garbage designed to propagandize young girls in the leftist agenda. If Walt Disney saw the programming being produced today in his name, he would be rolling in his grave.