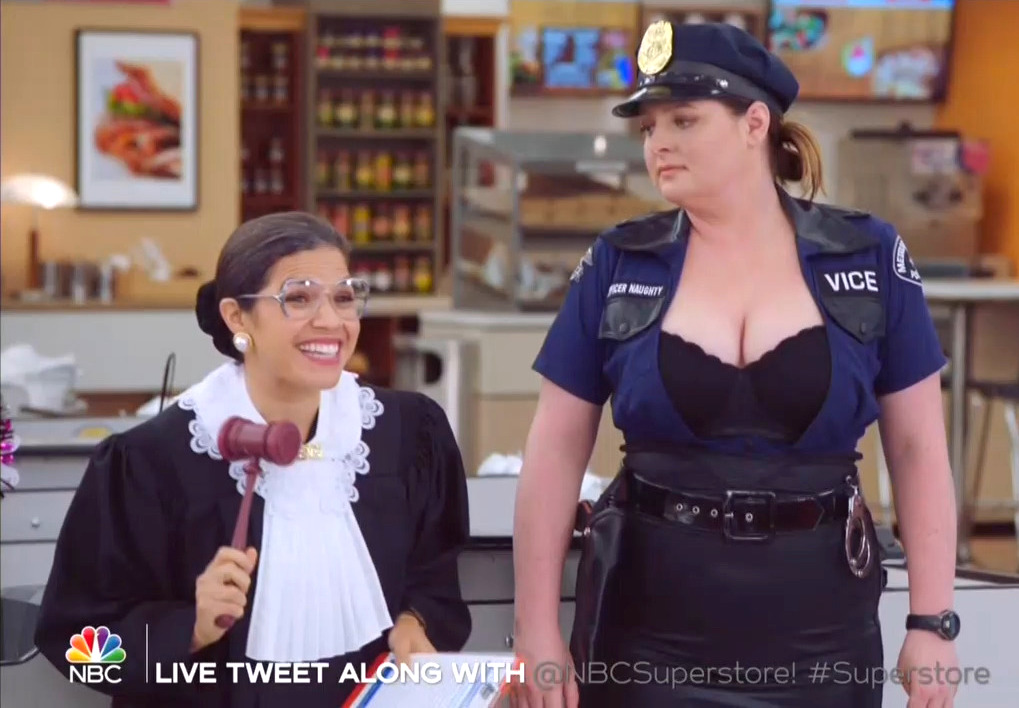 Hollywood has a weirdly idolatrous fascination with Ruth Bader Ginsburg. They have made both a documentary and fictional film about her and the Oscars last year was downright hagiographic in its worship of the "Notorious RBG." Because she protects the left’s sacrament of abortion and other left-wing causes, she is their living saint.

So, it's not surprising that network television would have one of its “strong, independent women” dress as the Supreme Court Justice for Halloween. The NBC sitcom Superstore consistently pushes a left-wing narrative, from illegal immigration to unionization. This week’s episode, “Trick-or-Treat,” on October 31, hit all the necessary “woke” buttons.

The smart and reliable store manager Amy (America Ferrera) dresses up as RBG and her boyfriend’s cowboy costume becomes a metaphor for “toxic American masculinity.”

Amy: It's a--it's a judge thing. Anyway, our new district manager is gonna be visiting today so I've thrown together some fun Halloween events. First, we're gonna be handing out goodie bags to the kids. Uh, Sandra, can you take the lead on that?

Amy: Glenn and Garrett, you two are gonna be managing the haunted house in the garden center.

Garrett: Aww, man, then I won't get to hear Jonah lecture us on whatever dumb metaphor his costume's supposed to be.

Jonah: Uh, actually, I got tired of explaining my costume every year, so this year, I'm just gonna be a good old-fashioned cowboy.

Glenn: We get it. You're herding us to the polls because no one here votes.

Garrett: Actually, I--I like that better. I'm switching to that.

Ruth Bader Ginsburg is not the first female Supreme Court Justice (that distinction belongs to Republican-appointed Sandra Day O'Connor) and she is not the only current woman on the U.S. Supreme Court. But, because the left desperately fears the changes that will happen should Ginsburg retire, they have made her into a kind of woke god. One wonders what would happen if a conservative female judge like Amy Coney Barrett ever rose to a position on SCOTUS. Would Hollywood give her the same treatment for being a successful female justice? Everyone knows the answer.

As for “toxic masculinity,” when will the left retire that phrase? Neither masculinity nor femininity is toxic. Femininity and masculinity are wonderful. There are only toxic individuals. Since Amy’s boyfriend on the show is super left-wing, he is more than happy to emasculate himself with such words.

The Superstore episode does get one thing right. When the employees ask about the annual costume contest, Amy lets all the staff know that they had to cancel the contest this year. “Corporate didn't want to approve another racial sensitivity training.” Yes, leftism does always ruin all the fun.