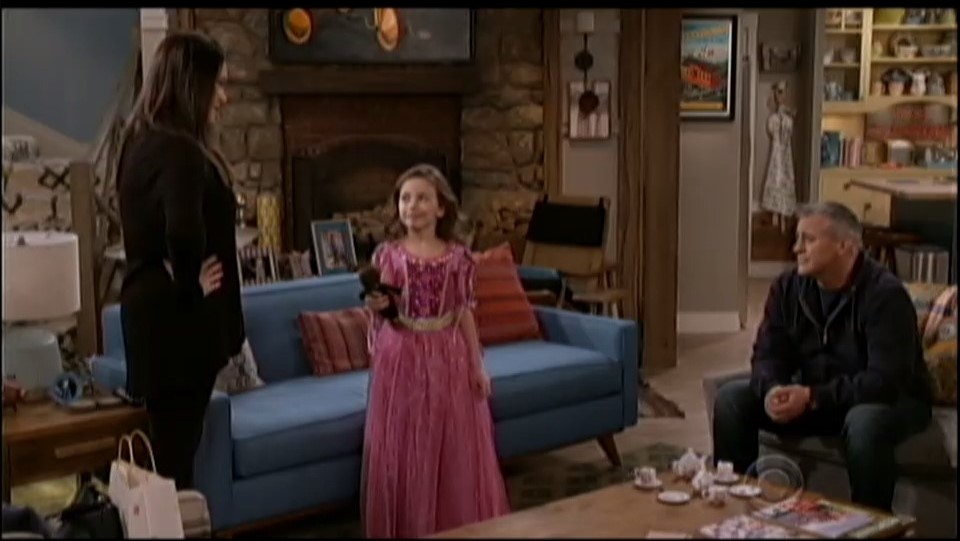 What is it lately that makes the Hollywood left work Supreme Court Justice Ruth Bader Ginsburg into ordinary, even rather boring, sitcoms? It happened again in the April 16 episode of CBS’s Man With a Plan titled “King for a Day.” This time it is because a liberal mom doesn’t want her daughter playing dress up like a princess. Presumably if it was her son she would have been fine with it.

Liberal mom Andi Burns (Liza Snyder) has been telling the children what she calls white lies rather than go through a series of “why?” questions from them whenever she answers one of their questions. She eventually starts doing it to her husband, Adam (Matt LeBlanc), too. If it wasn’t bad enough that she treats her husband as she does her children, she explains to Adam that she doesn’t want their youngest daughter, Emme (Hala Finley) to have the princess dress Adam bought for her. She raises the children with gender-neutral toys, naturally.

Andi says she is putting the children and Adam in a “protective love bubble” and that the lies are a time-saving solution to the endless questions from them. To counter the princess dress, which Emme absolutely loves, especially as she and Adam have a tea party together, Andi comes home with a new doll for Emme. That’s right – it’s a Ruth Bader Ginsburg doll. Really?

Andi: Emme, I hate to pull you away from all this fun, but, um, I got you a new doll. Yeah. And I think you are gonna love her even more than you love your dress.

Emme: Who is it? Cinderella? Snow White?

Emme: Why does this man have a girl name?

Andi: No, it's a girl. She just has more important things to do than fix her hair.

Emme: Where are her sparkles?

Andi: On her brain. Yeah. Ruth here has done a lot of important work for our country.

Adam: Well, you're such an expert on her accomplishments. We'd like to hear a few. Let's see what happens.

Andi: One of her accomplishments is that she doesn't have a husband that asks too many questions.

Emme: Thanks, Mommy. I love her.

Emme: She can be the witch who puts a curse on the princess!

Adam: And Adam lived happily ever after.

The poor child thought Ginsburg was a man! And, notice that Andi couldn’t really explain why the Notorious RBG is so great when Adam questioned her on her accomplishments. Looks like Andi is just blindly following along with today’s politically correct culture, doesn’t it?

Andi claims that she never introduced her daughters to princess dolls or dress-up clothes because she wanted them to grow up and be able to take care of themselves. Never mind that what she could have done is explain the difference between make-believe and reality, but that would be too much common sense, I guess.

After being called into a meeting with Emme’s school principal because Emme was kissing boys while looking for her Prince Charming, Andi takes a victory lap as the principal says this behavior is why they discourage princesses. Oh, brother. So, they go home to explain to Emme that princess stories are fairy tales and not real life. Naturally, Emme begins a series of “Why?” questions and then Adam does as Andi did and makes up gibberish to satisfy her curiosity.

Adam: Hey, Emme. Uh... We talked to your principal today and... it's not okay to kiss boys.

Emme: But I was just looking for my prince.

Adam: I know, honey. But those princess stories, they're-they're just made-up. You can't act like that in real life.

Adam: Because little girls are strong, too, and it's better if they stand on their own.

Adam: Because it's a big world out there, okay? And the only thing that you can really depend on is your own self-respect.

Adam: Because Snow White called and said you were being too cute in your dress and made her look bad.

How sad. Rather than talk to their children, as frustrating as it can be for any parent, they make up silly lies to end the conversation. The child just wanted to play dress-up, like millions of little girls naturally do and use her imagination to be a princess, but that isn’t allowed in today’s gender-neutral world.

And I think at least half of this show’s viewing audience would appreciate if Hollywood would stop trying to make Ruth Bader Ginsburg a thing. Even though, if you're looking for a doll that appears gender-neutral, she's the perfect choice!