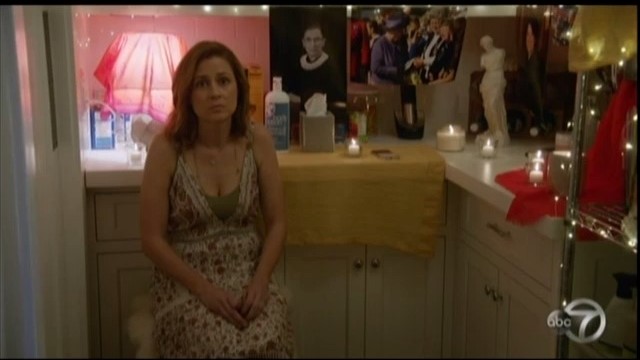 ABC debuted Splitting Up Together March 27 with the pilot episode and the premise is that a couple is divorcing and yet still sharing their house, for financial reasons. Every other week one gets custody of their three children while the parent without custody that week stays in the garage. That was the least of the unusual twists for this show.

In this episode, the older son is going through puberty and tells his mother, Lena (Jenna Fischer) that he is experiencing pain in his testicles. Since it is her week in the custody agreement, she takes him to a doctor for a diagnosis. Oh, yeah. Did I mention it’s puberty? And the doctor has a cure.

Dr. Kasper: Thank you for doing such a thorough job on Mason's new patient-information form.

Lena: I stapled some extra pages.

Dr. Kasper: No, I see that. It's very comprehensive.

Lena: I wanted you to have a full picture.

Dr. Kasper: I do. But the good news is your son is perfectly healthy. He's just going through puberty.

Mason: I'm gonna go get some Skittles from the lobby.

Lena: Okay, was that bad? Do you think it scarred him?

Lena: Of course he would go through puberty on my week, but that's okay.

Lena: So, it's just growing pains? The balls are...growing?

Dr. Kasper: I just don't want him to feel shame about doing what his body needs.

Dr. Kasper: Yeah. Let me give you my card, here. My cell is on there. Please don't hesitate to call if symptoms persist.

Lean: Are you... sending out vibes?

Lena: Are we vibing? I mean, my radar might be broken, but on the other hand, you aren't leaving.

Dr. Kasper: Well, you are blocking the door.

That’s right. After all that uncomfortable dialogue, the mom is flirting with the doctor.

Martin: What's all this?

Lena: Okay. Mason was having some discomfort. Yeah. I took him to a specialist, and apparently, he needs to... Tickle the ivories.

Lena: He needs to shake hands with your uncle.

Martin: My uncle? Jim? W-what are you talking about?

Lena: You just told me not to ask for your help.

Martin: Well, you said you didn't need my help.

Lena: Well, maybe I was wrong.

Lena: I like to think of it as more of a lair. MM.

Martin: This is really creepy.

Lena: I know. I just -- I thought it would be weird for him to do it in the room he shares with Milo.

Martin: Nothing is weirder than doing it in a pantry that your mom decorated. Oh, is that Ruth Bader Ginsberg?

Martin: Okay, I got one. She comes from a matriarchal society. She wears a bikini, but she kicks ass in it, and her bracelet game is very strong.

Martin: Oh, see? I knew I had a contribution to make to this family.

Lena: Yeah. I'm sorry if I made you feel like that. Bad wife.

Martin: I was. Well... I broke eye contact. I was a bad partner.

Lena: Well, at least you're in great shape.

Martin: I am in great shape.

I have to say I agree with Martin here. The nook is creepy and I don’t think Ruth Bader Ginsburg, a grandmother, would appreciate being a part of that décor. And who in their right mind thinks a young boy wants to fantasize about an elderly, “worthy, capable” leftist woman? Eww. At least Lena finally recognizes that she should have told Martin and let him handle it. If this isn’t a time for some father-son time when is?

How cliché for the father’s role to be reduced in today’s entertainment. This show will need to get a lot more clever and innovative without the creepiness to hold an audience.