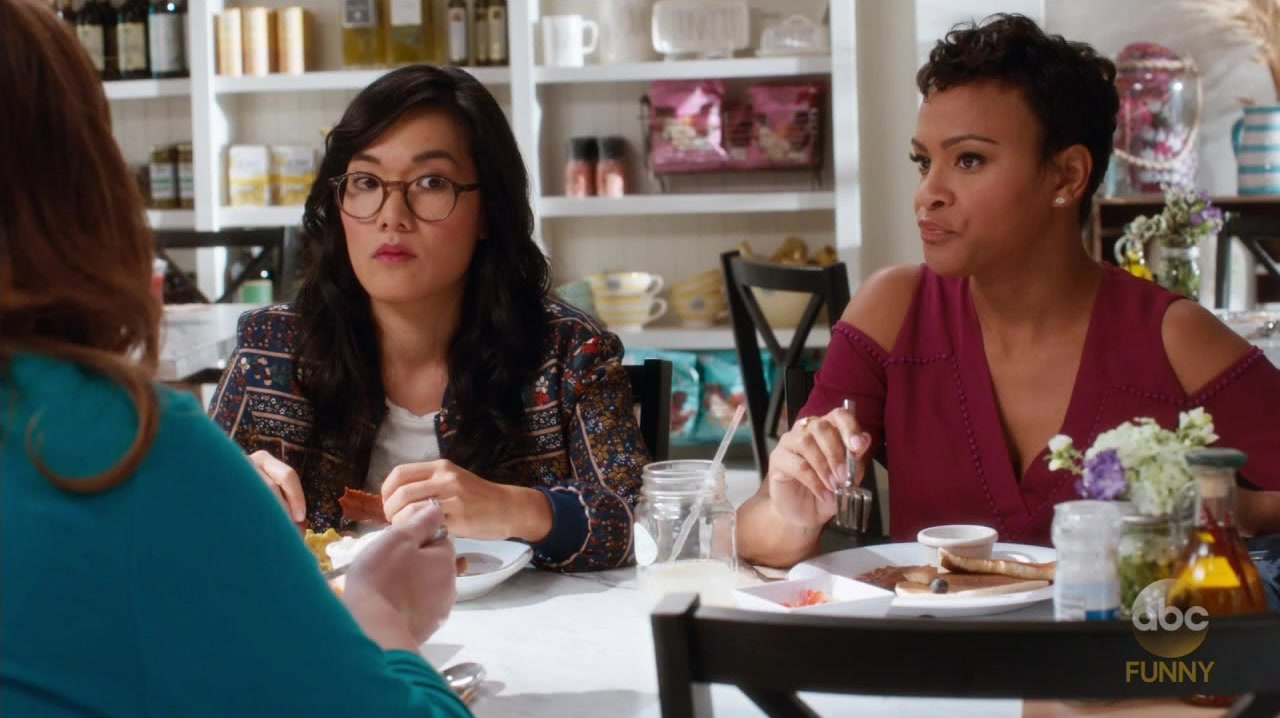 ABC’s American Housewife has shown a lot of potential to be a good show in its second season after bashing conservatives in its first. It’s been refreshing to hear jokes that are actually funny and not loaded with a political agenda.

But it only took four episodes before they ruined any hope for an agenda-free, wholesome second season. Wednesday, October 18’s episode, “The Lice Storm,” inserted every radical, pro-choice feminist’s favorite pro-abortion language into an otherwise innocent scene in which main character Katie (Katy Mixon) visited her friends for lunch despite having lice:

Katie: I don't know what to do. Taylor grew up overnight and doesn't want to spend time with me, and Anna-Kat gave me lice.

Angela: You have lice?! Lice braids!

Katie: Had lice -- past tense. Combed 'em all out.

Katie: So, what?! I'm supposed to not go to restaurants and hug my friends when I have lice?

Doris: So, I also have a parasite sucking the nutrients out of my body.

Katie: How did that happen?

Doris: I was in bed guzzling Chardonnay and watching Michael Phelps race a shark. Then I got so worked up that I jumped Richard like it was the 17th of the month! That's our bone day.

Angela: How are you feeling?

Doris: Pissed! Pissed that I'm about to have my fourth child! I had eight years until my youngest left for Princeton -- September 10, 2025. Then I would jet off to Majorca, find a little villa on a cliff, learn to sculpt, maybe take a lover -- possibly my sculpting teacher. Now this little creature moved my finish line. By the time I get to Majorca, I'm gonna be so old that my sculpting teacher is gonna rebuff my aggressive advances.

Angela: Look, I come from a place where everything happens for a reason. This may not be part of your plan, but it's obviously part of the universe's plan.

Doris: Oh! I see. So, if I poke you hard with this fork, is that also part of the universe's plan? Is it, Angela?!

Angela: Don't be mad at me. I'm not the one who uses "Rarely having sex" as a form of birth control.

Comparing a living, growing, innocent, unborn child who is a human being to parasitic lice? That goes beyond the cliched “apples and oranges” comparison. This is on the level of a “Mother Theresa and Jeffry Dahmer” comparison. Actually, they were both human beings, too, so it’s even beyond that.

Though this mother disdains her “creature” (also known as her child) so much for ruining her plans to sexually harass her fictional Majorcan sculpting teacher, at least there’s no talk of abortion. But it is the goal of abortion activists to devalue human life in the hopes that unborn children will be viewed as disposable parasites/creatures on the level of lice, leading to more numerous and profitable abortions.

Also, notice how Hollywood has been replacing “God” with “the universe” lately, too? Unborn children aren’t God’s plan, they’re “the universe’s” plan? So, what exactly is “the universe” supposed to be in this scenario? Space? Planets? Stars? And they’re omniscient and omnipotent enough to replace God and plan out human life? I don’t think so.

Guess who designed “the universe,” Hollywood? Yes, GOD. So, nice try but you’re still giving credit where credit is due. Sort of.

It’s really sad to see these pathetic attempts by the Hollywood left to create a Godless dystopia where mothers hate their own children and view them as mere parasites. Soon, they’ll be writing storylines where the lice fairy star in the sky punishes women with lice creatures in their wombs.

Oh wait. That’s pretty much exactly what they did with this script.

Let’s hope, for the sake of God and family, that American Housewife will be disposed of. Just like lice.