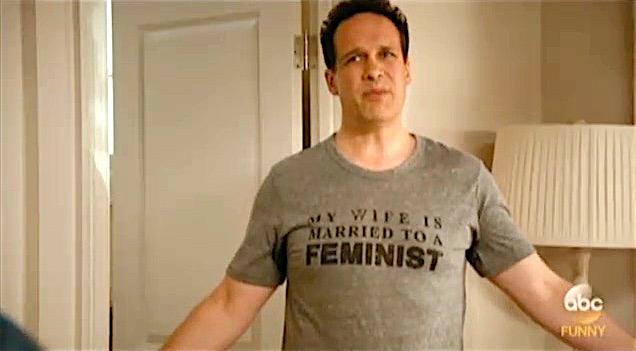 In the second episode, titled “The Nap,” the show literally takes to T-shirts to promote feminism with husband Greg (Diedrich Baker) home sick wearing a shirt that reads, “My Wife Is Married To A Feminist.” Might as well say, “My Wife Is Married To A Wimp.” But, apparently, even though fewer than 20% of Americans consider themselves feminists, it’s still boast-worthy enough for primetime television.

Katie (Katy Mixon) protests, “You should not be allowed to wear that T-shirt! If you were a real feminist, you would down some DayQuil and rally like a mommy would.” Echoes of all the feminists praising Hillary as a “badass” for rallying through pneumonia, with Salon even writing the article “Hillary powers through pneumonia — because that’s what women do?”

But don’t think they forgot to take shots at the so-called “conservative” son Oliver (Daniel DiMaggio.) The show once again doesn’t mince words, with Katie literally telling him he will become a “capitalist pig” after he made illegal deals for a stock market club - because obviously anyone with even the slightest sympathies towards capitalism will turn into a white-collar criminal. With mothers calling them “capitalist pigs,” I almost don’t blame them.

However, and I will give the show credit for this, it wasn’t all bad. The show actually takes the time to talk about the value of stay-at-home mothers. Few Americans may be official feminists, but I’m still surprised that these lines made it to air: “Being at home with my kids is the most important thing I could be doing right now” and “Being a stay-at-home mom does suck. And it's really important. But also, it can be the best thing in the world.”

Anna-Cat: Would you rather have hair for teeth or teeth for hair?

Greg: Hair for teeth. No-brainer. Smoothies for every meal. Hey, what are you doing down here? I thought you needed a nap.

Taylor: Can we eat? Yeah.

Katie: Okay, let's review. Being a stay-at-home mom does suck. And it's really important. But also, it can be the best thing in the world. So yeah. This is what I would rather.

Not only is it a mostly anti-feminist sentiment at the heart of a liberal network, it actually pertained to the plot of the show. With liberal bias literally spelled out in T-shirts on this show, I’m not sure what I’m more surprised at right now.

Where it stands, I appreciate Katie’s sentiment that being a stay-at-home mother can be the most frustrating yet satisfying job in the world without pay, whether feminists acknowledge it or not, but it couldn’t have come from a more biased perspective.