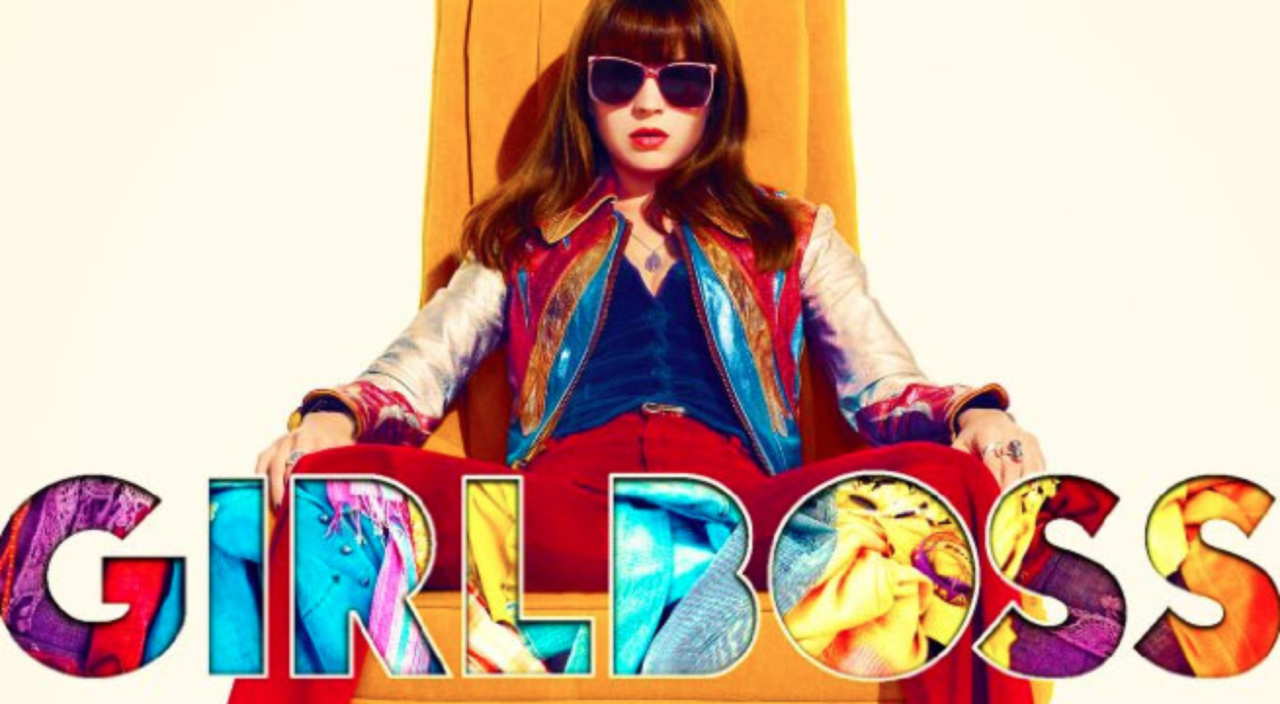 If you’re a conservative who cringes whenever the Hollywood left sneaks political punches into movies and shows, brace yourself for the brand-new Netflix original series Girlboss, which premiered April 21.

Loosely based on the life and eponymous memoir of entrepreneur Sophia Amoruso, you’ll find out in the first 30 seconds of the very first episode, “Sophia,” where the show stands politically, as the camera pans past a poster of George Bush with the words “LIAR” beneath his face. They certainly didn’t waste any time making their opinions known.

And it was all downhill from there.

(Though a hernia in episode two, “The Hern,” forces her to temporarily take another regular job to get health insurance benefits for hernia repair surgery. Poor girl.)

The onscreen character is named Sophia Marlowe (played by Britt Robinson), because, as Girlboss reminds us at the beginning of every episode, this is a “real loose” adaption of the real Sophia’s life.

Not loose enough, however, as Sophia admitted to being a thief in her memoir #Girlboss, so the scenes of her constant shoplifting were based on reality. Even the stolen carpet Sophia walks off with in the first episode as the lyrics “rebel girl” play in the background.

In episode two, she brazenly approaches a cashier at a bookstore with a stolen book in her hand, right after telling a vintage store owner that she has “good instincts” and “common sense:”

Ironically, the first item real-life Sophia ever sold on ebay was a stolen book. And, just like in episode 5, “Top 8,”, she really purchased a bot illegally (I guess she’ll fork over money for something if it’s illegal) that helped her to “steal” friends via friend-adding software to increase Nasty Gal’s friend count on MySpace.

So, her whole empire was built on corruption. Perhaps that’s why it recently went bankrupt and was bought out by another company?

I lost track of the thefts after that (there were more), except for the final one in episode 11, “Garbage Person,” which served as a bonding moment between Sophia and the mother she found who had abandoned her as a child.

After Sophia finds her mom, Kathleen (Alice Ripley), they eventually decide it would be a clever idea to steal a Christmas tree from a tree lot. But they did stop for a moment to pray at least...for Jesus to help them get the tree over a fence. “Help us, Jesus! Help us steal,” they scream, as they break out into giggles over their little escapade. Otherwise known as theft. And sacrilege.

Sophia rationalizes, “These trees grow out of the ground. So how can you really own one to sell?” Typical liberal, anti-capitalist, environmentalist thought process. Yet somehow we’re supposed to be rooting her on and celebrating her entitled behavior.

The same dysfunctional mother tells Sophia, after Sophia jokes that a Christmas ornament she made looks like “Satan’s pubes,” “Gosh, you’re so cool and fun.” “Cool and fun?” To whom? Certainly not to viewers with any sort of moral or Christian compass.

If you combine every single millennial stereotype, you pretty much have the characters and plot of Girlboss. Sophia especially seems to embody every millennial trait wrapped up into one, brash, foul-mouthed, angry character who is extremely hard to like.

But that was the goal of Girlboss’s creator Kay Cannon, who told The Hollywood Reporter:

“What I had to put to the side is this concern about her being likeable. She wouldn't feel real if I was concerned about making sure people were head-over-heels in love with her. The whole point of her is to give young women the permission to be real and not say, ‘I'm this good little girl that listens to whatever a guy tells me to do.’

“It was about trying to unravel this idea of what a woman should be…Hillary Clinton had this issue of, ‘Stop shouting. Smile more.’ People try to make women a very specific thing so that we like them.”

Yeah, well, as far as I know, even extremely polarizing Hillary Clinton hasn’t brazenly shoplifted, and told people to “suck a dick.” How dare we dislike cursing every three words, thievery, selfishness, promiscuity and sacrilege in a character? That’s so sexist!

Here are a few other unlikable quotes from Sophia.

“I would blow Dick Cheney for a top right now.”

“It’s not a business. Yeah. I’m not looking to cheat people or screw taxpayers, buy elections.” (About starting Nasty Gal.)

“I mean, Bob Mackie meets, I don’t know, Jesus’s orgasm.” (Over a handbag she fell in love with.)

“…in the beginning there were two sets of footprints but now there is one because you were all carrying me.” (Putting a secular twist on the religious poem Footprints.)

“Save a spot for me down there, Rita.” (Speaking to a dead woman whose estate sale she’s shopping at, as she falls to the floor in pain from her hernia and feels like she’s dying. Because going to Hell is oh, so funny!)

“Shut the fuck up!” (Yelling out the window to Christmas Carolers, until she realizes her neighbor Lionel is part of the group and that it’s an all-boy, gay chorus. Then, she apologizes.)

What’s most disturbing is that real-life and on-screen Sophia are supposed to be an inspiration to young girls. That’s the whole point of the #Girlboss network that she created.

Girlboss’s executive producer and show creator Charlize Theron told GreekReporter.com, “I love the idea that we should encourage girls to not feel, at 19, that they’re too young to chase their dreams.”

Apparently, the people behind Girlboss think an unlikable character is a perfect inspiration for girls and women everywhere. Go chase your dreams, girls! And mow down whomever you must in the process while raging and cursing at the world, you Nasty Gal, you!

But not everyone thinks she’s unlikable.

Costume designer Audrey Fisher describes Sophia’s character as “magic and moxie” in an interview with Racked.com.

And Britt Robinson told The Hollywood Reporter of the character she plays:

“She's nasty! She's ruthless. She's allowed to say, ‘Suck my balls,’ and ‘Suck a dick.’ It's important that a character like that exists on television because girls can say bad words and girls can be snarky and crude…

“When you don't see a surplus of something then it's a little shocking to hear a young girl say, ‘F- me in the dick.’ It's hard for people to watch and maybe at times turns people off so people are afraid of it. They don't want to see women in that light. They want to see women in a pretty package. It freaks a lot of people out.”

Oddly enough, despite the desire to push this twisted version of feminism onto viewers, Girlboss mocks feminist extremists in episode 3, “Thank You San Francisco,” as Sophia and her boyfriend Shane encounter a crazed woman in the street:

How Sophia can’t recognize some of herself in this angry, crazed feminist is beyond me. Or, maybe she does and that’s why she’s so calm and emotionless during the entire scene?

As for Girlboss’s future with Netflix, creator Cannon admitted in her interview with The Hollywood Reporter that she’d like to have more seasons so that she can compare Nasty Gal’s bankruptcy with Donald Trump’s presidency:

“We had already finished filming and Sophia called me the day after Donald Trump was elected president and said that Nasty Gal was filing for bankruptcy. In this idea that we're not telling a fairytale, I thought that was an amazing story. Here's this guy who filed for bankruptcy several times and has failed upward and we have a female-driven business that hired hundreds of women and Sophia was this mentor to women to take risks who is being criticized. We have a president where now our female reproductive rights are in question, and we've taken a million steps backward and this company is filing for bankruptcy. That's a wonderful story to tell. I hope Netflix lets us tell it and we get enough seasons to do that.” -Cannon

For the love of God, literally, let’s hope Netflix does not let them “get enough seasons to do that.”