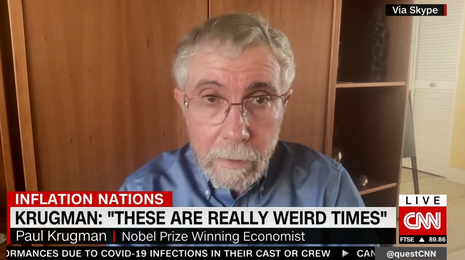 His new op-ed, headlined, “Don’t Tell Anyone, but 2021 Was Pretty Amazing,” was about as ridiculous as it was amusing. Here’s his new talking point: “[T]here’s a good chance that once time has passed and we’ve had a chance to regain perspective, we’ll consider 2021 to have been a very good year, at least in some ways.” He continued: “In particular, although nobody seemed to notice, it was a year of spectacular economic recovery — and one in which many dire warnings failed to come true.” How can Krugman write this with a straight face after admitting to the world that he got the inflation crisis he dismissed for months “wrong,” and that the blaring sirens warning how badly it would affect the economy were “right?”

Krugman pointed to two examples to desperately make his case: declining unemployment and retailers’ alleged ability to meet Christmas demand. That’s it. On employment, Krugman had the audacity to claim “the cumulative decline in the unemployment rate starting in December 1982 — the beginning of former President Ronald Reagan’s boom — compared with the decline over the course of 2021.” But it got worse. He claimed that this pointed to “morning in America,” which is the same flapdoodle he peddled as far back as July 2021.

Here’s what Krugman misses: Reagan’s economy didn’t endure an endemic of government lockdowns nationwide that forced millions to artificially lose their jobs. Secondly, inflation under Reagan fell drastically over his first year in office, unlike President Joe Biden’s first year. Thirdly, the economy only recovered “roughly 82 percent of the jobs lost during the pandemic” as of Nov. 30, according to National Review. Approximately 2.4 million workers who left the workforce at the start of the pandemic have still not yet returned. In other words, the economy couldn’t even fully recover the jobs lost during COVID in Biden’s entire first year in office.

Krugman didn’t even mention the persistent labor shortages, which even the liberal Washington Post warned “could become an enduring feature — or defect — of the U.S. economy.” The Post said there were 3.5 million fewer people employed than two years ago, and only just over half of those people were seeking a job. In fact, the labor force participation rate, “has hardly budged” since the summer of 2020, the Post clarified.

Krugman ignored another inconvenient fact blowing up his argument: The inflation he shrugged off for so long ate up the wage gains claimed by Americans in the past year. In fact, Krugman’s only mention of the hottest inflation in decades, which he admitted was a “real problem” in his latest article, was him harping about his hopes that it would “gradually subside as we work through the remaining kinks in the supply chain.” He mentioned nothing about how inflation erased the wage gains for Americans.

Conservatives are under attack. Contact The New York Times at (800)698-4637 and demand it distance itself from Krugman’s nonsense.