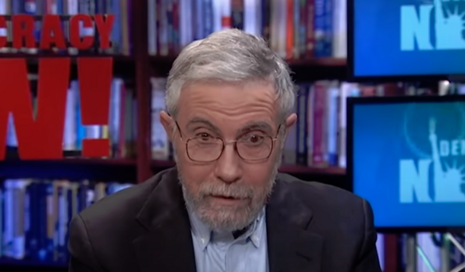 A tectonic shift in the world of economics has taken place: New York Times economist Paul Krugman finally admitted that his detractors on inflation were right all along.

The leftist economist surprisingly conceded in a new op-ed that others have warned “that we may face something comparable to the stagflation of the 1970s. And credit where credit is due.” Then came the sticker shock: “So far, warnings about inflation have proved right, while Team Transitory’s predictions that inflation would quickly fade have been wrong.” Talk about eating crow.

Krugman recently conceded Nov. 14 that he “got inflation wrong” even though he tried to hedge by claiming he thought blindly believing the false “transitory” inflation narrative was “still the best bet.” His latest concession puts him even further at odds with his Nov. 11 column: “History Says Don’t Panic About Inflation.” National Review senior political correspondent Jim Geraghty documented at least six times throughout 2021 where Krugman has tried to downplay or dismiss the threat of spiking inflation.

In keeping with his modus operandi, Krugman couldn’t just take the loss and move on in his latest column. He twisted himself into a pretzel trying to explain why he was wrong — again. For example, even though he acknowledged that President Joe Biden’s gargantuan $1.9 trillion stimulus bill enacted earlier this year did cause inflation to “shoot up,” he still tried to spin that “overall spending isn’t extraordinarily high; it’s up a lot this year, but only enough to bring us more or less back to the prepandemic trend. So why are prices soaring?”

Then in an about-face, Krugman remained stiff-necked and said he’s still “a card-carrying member of Team Transitory.” However, Krugman noted, “I would reconsider my allegiance if I saw evidence that expectations of future inflation are starting to drive prices.” In his conclusion, Krugman took an outrageous parting shot at his opponents by claiming they were right for the wrong reasons:

Maybe the real takeaway here should be how little we know about where we are in this strange economic episode. Economists like me who didn’t expect much inflation were wrong, but economists who did predict inflation were arguably right for the wrong reasons, and nobody really knows what’s coming.

Give it up, Krugman.