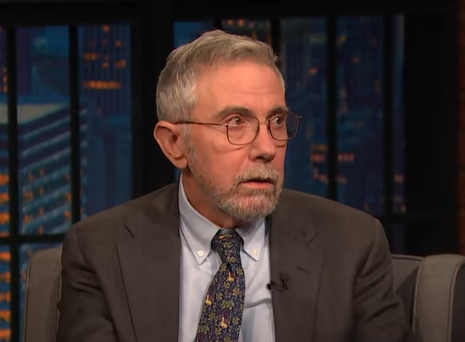 Krugman headlined his latest op-ed “It’s Morning in Joe Biden’s America” in a nonsensical twist of the late former President Ronald Reagan’s 1984 campaign ad. Krugman haphazardly celebrated the 850,000 jobs increase in June and attacked former President Donald Trump: “Oh, and so much for Donald Trump’s warnings that there would be a ‘Biden depression’ if he weren’t re-elected.”

It’s too bad for Krugman that Politico just tweeted that “U.S. economic data does not look quite as robust under the surface as it does in some of the headlines.” The irony of Krugman’s latest op-ed is that recent data on spiking inflation may have caused Krugman to hedge his recent stance that the issue would only be transitory: “Also, while I’m in the camp that sees the current inflation as a transitory problem, we could be wrong.”

Krugman pivoted to tout the Biden administration telling Americans “not to make too much of any one month’s employment report.” But that’s exactly what Krugman was doing with his latest op-ed drooling over the June jobs report.

Krugman’s celebration of the June jobs report is also very misleading. Euro Pacific Capital Chief Economist and Global Strategist Peter Schiff threw a major wrench into left-wing celebrations that the June jobs report was evidence of sunny days ahead for the Biden economy. According to Schiff, “June's #jobs report being heralded as stronger than expected is actually weaker than expected.” He continued: “Instead of falling to 5.6% the official unemployment rate rose to 5.9%, while labor [force] [participation] held steady at 61.6% instead of improving to 61.7% as forecasters had expected.” [Emphasis added.]

Krugman never mentioned the uptick in the unemployment rate.

June's #jobs report being heralded as stronger than expected is actually weaker than expected. Instead of falling to 5.6% the official unemployment rate rose to 5.9%, while labor forced participated held steady at 61.6% instead of improving to 61.7% as forecasters had expected.

But, for Krugman, the Biden economy is experiencing “a boom. What’s behind it?” Krugman gave big attribution for the “boom” to Biden’s “American Rescue Plan.” But Politico noted that “[t]he services sector is clearly suffering from a lack of available workers and an inability to acquire necessary supplies.” Perhaps one reason for the service sector woes is due to all the “free lunch” money Biden was adamant about sending out. But in Krugman’s world, “[H]ow much credit should Biden get for job growth in 2021? Not all of it, certainly, but quite a lot.”

Bloomberg News detailed the extent to which markets are reacting to the premature glorifications of economic recovery:

Benchmark 10-year Treasury yields slumped Tuesday to touch their lowest since February after a key gauge of U.S. service-sector activity fell more than expected, raising concern over the strength of the economic rebound. Brent crude futures, which hit their highest since 2018 after OPEC+ talks over production increases collapsed this week, reversed course to give up this month’s gains.