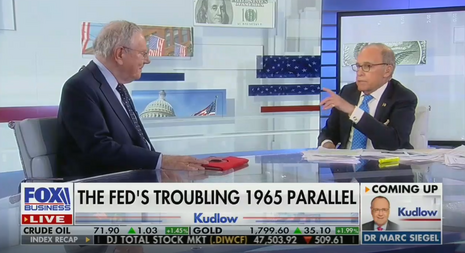 Forbes Media Chairman Steve Forbes and Fox Business host Larry Kudlow both gave the world’s richest man their endorsement for the top position at the Fed during the Dec. 16 edition of Kudlow. During the beginning of his segment with Forbes, Kudlow asked: “[W]hy doesn't Jay Powell and the Fed have the backbone to take aggressive action to curb record-high inflation? By the way, if they don't, it could derail the whole economy.” He then gave his hot take: “[F]or all these reasons — you know, as I said last night — I prefer Elon Musk as the Fed chair.” Forbes chimed in later, saying “I’d vote for his confirmation. You would too.”

Speaking about Musk, Kudlow said,“Now to me, you’re against the [Build Back Better] bill, you’re against the [electric vehicle] subsidies and [Sen.] Elizabeth Warren [(D-MA)] hates you. Those are grounds to be Fed chairman.” Forbes agreed and noted that Musk “understands the real world. He understands what it takes to get things done. These people don’t. They think you turn on a switch and, voila, it happens.” Forbes reminded Kudlow: “When we were kids we were told, ‘Milk just doesn't come to the markets.’” Later, Kudlow asked a rhetorical question: “Do you think Elizabeth Warren knows about milking cows, by the way?” Forbes then quipped: “She just milks taxpayers.”

Forbes accused the Fed of being “in their own universe, isolated from everything. They need some fresh air.” Kudlow humorously suggested that given Musk’s persona, he probably wouldn’t listen to “10,000 Fed economists.” Musk certainly has made a habit out of turning the pontificating of elites on its head.

Recently, Musk ripped Warren for whining about TIME magazine choosing him as its “Person of the Year.” Warren took to Twitter Dec. 13 to express apparent disgust at the world’s richest man receiving the title of TIME’s 2021 “Person of the Year.” Warren spewed, “Let’s change the rigged tax code so The Person of the Year will actually pay taxes and stop freeloading off everyone else.” Musk clapped back: “[I]f you opened your eyes for 2 seconds, you would realize I will pay more taxes than any American in history this year.” Then Musk dropped the truth bomb: “Don’t spend it all at once … oh wait you did already.” He even called Warren “Senator Karen.”