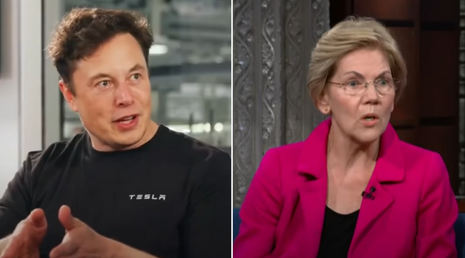 Sen. Elizabeth Warren (D-MA) took to Twitter Dec. 13 to express disgust at the world’s richest man being chosen as TIME magazine’s 2021 “Person of the Year.” Warren spewed, “Let’s change the rigged tax code so The Person of the Year will actually pay taxes and stop freeloading off everyone else.”

Musk clapped back: “[I]f you opened your eyes for 2 seconds, you would realize I will pay more taxes than any American in history this year.” Then Musk dropped the truth bomb: “Don’t spend it all at once … oh wait you did already.” Ouch.

And if you opened your eyes for 2 seconds, you would realize I will pay more taxes than any American in history this year

Musk began his Twitter battle with Warren by engaging in epic trolling. “Stop projecting!” Musk exclaimed in a tweet along with a Fox News article headlined: “Elizabeth Warren is a fraud -- Her lies about being Native American disqualify her from presidency, Senate.” He wouldn’t let up in lambasting the senator for her phony outrage: “You remind me of when I was a kid and my friend’s angry Mom would just randomly yell at everyone for no reason.”

Musk’s point about the government spending tax dollars it hasn’t even received yet is spot-on. The Associated Press reported in October that for 2021, “the joint report from Treasury and the Office of Management and Budget said government spending increased 4.1% to $6.82 trillion.” Musk is worth an estimated $251.1 billion. This means that Musk’s entire net worth only accounts for a measly 3.68 percent of the total amount the federal government is projected to have spent in 2021 alone.

Warren is not the only senator that Musk has poked fun at in recent months. Just recently, Musk ripped Sen. Bernie Sanders (I-VT) for whining about the rich paying their fair share on Twitter Nov. 13. Musk responded to Sanders: “I keep forgetting that you’re still alive.”

Warren’s complaining perfectly illustrates how the left can’t handle the fact that a notoriously liberal magazine decided to think for itself and honor a billionaire who doesn’t genuflect to the leftist hive-mind.

Conservatives are under attack. Submit a letter to the editor at TIME (letters@time.com) and commend it for not bowing to the left in choosing Elon Musk as its “Person of the Year.” .