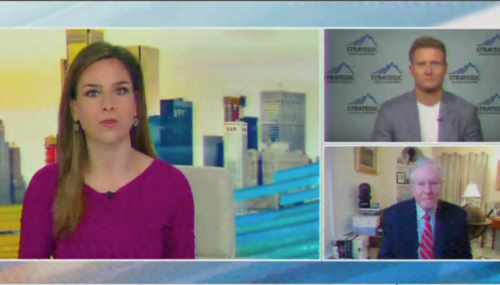 Jeff Poor
June 29th, 2010 10:10 AM
It's hard to imagine an economist being provocative, but Paul Krugman, a Nobel Prize winner, has managed to do so. In his June 28 New York Times op-ed, Krugman argued that since governments around the world aren't willing to double-down on Keynesian policies meant to stimulate the global economy, the United States and the rest of the world are facing a third depression. But on CNBC's June 28 "…

Arianna Huffington Comes Out in Favor of Flat Tax -- for Greece

Jeff Poor
June 14th, 2010 3:44 PM
Sometimes even the seemingly most unreasonable characters as far public policy goes can be reasoned with if the circumstances are right. Just sometimes it takes someone like Steve Forbes to pull it off. On the June 14 broadcast of MSNBC's "Morning Joe," Forbes explained that a flat tax might be the medicine that Greece, a country on the fiscal brink needs. "Well, when you engage in binge…

Jeff Poor
June 6th, 2010 12:22 AM
How's this for outside-the-box thinking - use nuclear explosives to stop the BP oil spill that is ravaging the Gulf Coast? According to some of the panelist on Fox News Channel's "Forbes on Fox," using nuclear materials would be a more expeditious way to solve this calamity. "That's right, nuke it." "Forbes on Fox" host David Asman said on the show's June 5 broadcast. "Some scientists do…

Seton Motley
March 29th, 2010 5:49 PM
Two Useful Idiots and the Man Who's Using Them In light of our recent look at Venezuelan thug dictator Hugo Chavez and the FCC Diversity Czar Lloyds who love him, we now bring you this.  The intrepid Steve Forbes took last Wednesday to FoxNews.com to analyze Chavez vis a vis a report by the Organization for the American States (OAS).  Forbes writes about:(…

Forbes: Is a Chavez-Style Media Crackdown Coming to America

Noel Sheppard
March 25th, 2010 11:21 PM
"Many of [Hugo] Chavez’s most ardent supporters here in the U.S. come out of the 'media reform' movement, which believes that our corporate media has been thoroughly co-opted by capitalists bent on destroying the benevolent leadership of the likes of Chavez. They think that our capitalist-plagued media world is in dire need of reform."So ominously wrote Steve Forbes Wednesday in an article…

CNBC's Kudlow Rips MSNBC for Lack of Balance; Calls for Supply-Side So

Jeff Poor
October 28th, 2009 8:08 AM
It is bad when an anchor from a sister network feels compelled to call out a colleague about the lack of ideological balance, but that's just what CNBC's Larry Kudlow did on his Oct. 27 program.  In a time when some of CNBC's critics demand the network be held to a high standard when it comes to balance, a different standard is applied to MSNBC. And a lack of balance is something Kudlow pointed…

Jeff Poor
February 2nd, 2009 6:31 PM
Don't like the notion of Wall Street employees receiving bonuses? Shoot the messenger - as Adam Green at The Huffington Post has done. In a Feb. 2 post on The Huffington Post, Green said it was bad form for CNBC "Street Signs" host Erin Burnett to even think about considering the other side of the anti-Wall Street bonus argument, since some Wall Street banks received TARP funds, courtesy of the…