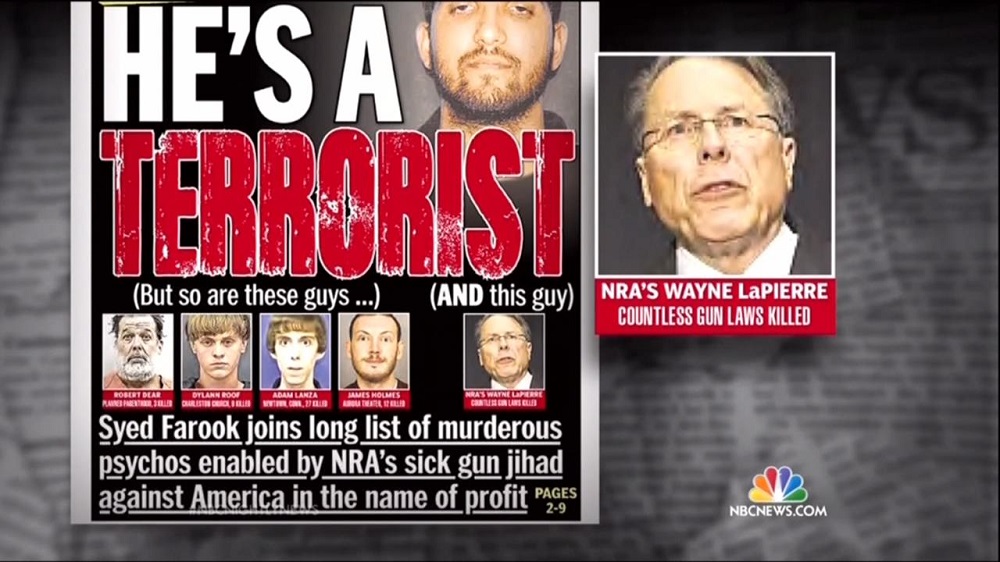 CBS Evening News also set aside a full report to specifically targeting the AR-15. Scott Pelley and Dean Reynolds emphasized that the San Bernandino terrorist attack was the latest mass shooting where the semi-automatic rifle was used. Reynolds pointed out that "there was once a nationwide ban on such assault weapons imposed in 1994...When it was lifted 10 years later, gun rights advocates cheered, and sales rose. But the slaughter at San Bernardino and several other recent mass killings all shared a common thread: the shooters used an AR-15-style rifle." [video below]

Cordes includes her mention of the New York Daily News's "terrorist" smear of LaPierre in a segment on the California massacre "reignit[ing] debates over gun control, terrorism, immigration, and surveillance," as Pelley put it during his introduction. After her "gotten personal" line, the CBS correspondent noted that "Republicans insist the focus on gun control is misplaced. To drive the point home, Texas Senator Ted Cruz campaigned today at a gun range in Iowa." 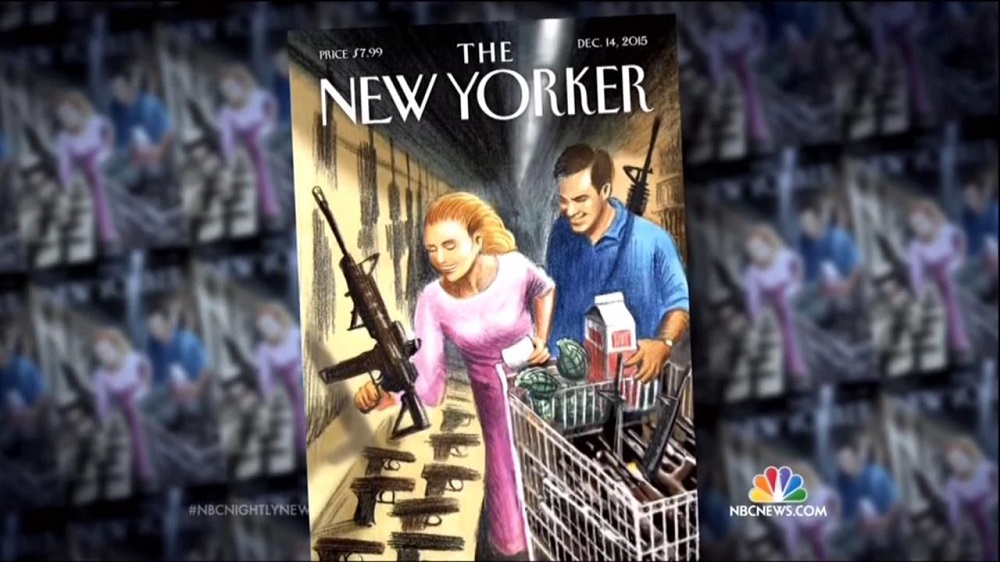 Jackson's report on NBC Nightly News also zeroed in on Cruz's visit to the Iowa gun range. She underlined that Cruz didn't "call...off the campaign stop after the [California] attack." She followed her "provocative" description of The New Yorker's cover and the mention of the Daily News front page by playing up statistics from Swiss-based Small Arms Survey [video below]:

HALLIE JACKSON: ...Americans, who make up less than five percent of the world's population, own more than 40 percent of the world's guns, according to an international weapons research group — nearly as many guns as people now, and more sold recently. On Black Friday, a record number of background checks, coming at a time when many feel vulnerable.

On ABC's World News Tonight, Tom Llamas barely touched on the debate over gun control during his report on the 2016 campaign. He also highlighted Senator Cruz's campaign stop, and noted that the Texas senator was "the other candidate surging, as the country grapples with the terror threat...[Cruz] expressing support for the right to bear arms by visiting a gun range in Iowa two days after a mass shooting in America."

Llamas's segment focused mainly on the latest CNN/ORC poll, which, in anchor David Muir's words, revealed Donald Trump's "sudden surge," as well as "his biggest lead since getting into the race." The ABC journalist also mentioned that this poll "revealing something else interesting: Trump, [Ben] Carson, [Ted] Cruz, [Marco] Rubio — even Jeb Bush — all in a statistical tie with Hillary Clinton."

The full transcripts of the reports from Nancy Cordes and Dean Reynolds on the December 4, 2015 edition of CBS Evening News (which ran back-to-back); and Hallie Jackson's report from NBC Nightly News on the same evening:

JOHN BLACKSTONE: The messages left here are heartfelt — offering prayers and condolences, But, Scott, one of the notes up there says simply, 'This must end.'

That message was heard on the presidential campaign trail, and it reignited debates over gun control, terrorism, immigration, and surveillance.

CHRIS CHRISTIE, (R), PRESIDENTIAL CANDIDATE: I am convinced that was a terrorist attack.

NANCY CORDES (voice-over): On one thing, there is bipartisan agreement—

HILLARY CLINTON, (D), PRESIDENTIAL CANDIDATE (from campaign event): We are dealing with an act of terrorism.

CORDES: But everyone has their own approach to the threat. GOP front-runner Donald Trump wants to step up surveillance on mosques.

DONALD TRUMP, (R), PRESIDENTIAL CANDIDATE: You know, I have friends that are Muslims. They're very nice people. But they understand there's a big problem.

CORDES: Republican Chris Christie is pushing for the reinstatement of the bulk phone data collection program that was revealed by Edward Snowden.

CHRISTIE: We need to do these things, because if we don't do them, we are putting you and your families at risk.

CORDES: The always-heated gun debate has gotten personal. The New York Daily News today called the head of the National Rifle Association a 'terrorist.'  But Republicans insist the focus on gun control is misplaced.

CORDES (on-camera): Congress is slated to leave for the holidays next week. So even if there was consensus about what to do now, Scott, it isn't going to happen for a while. 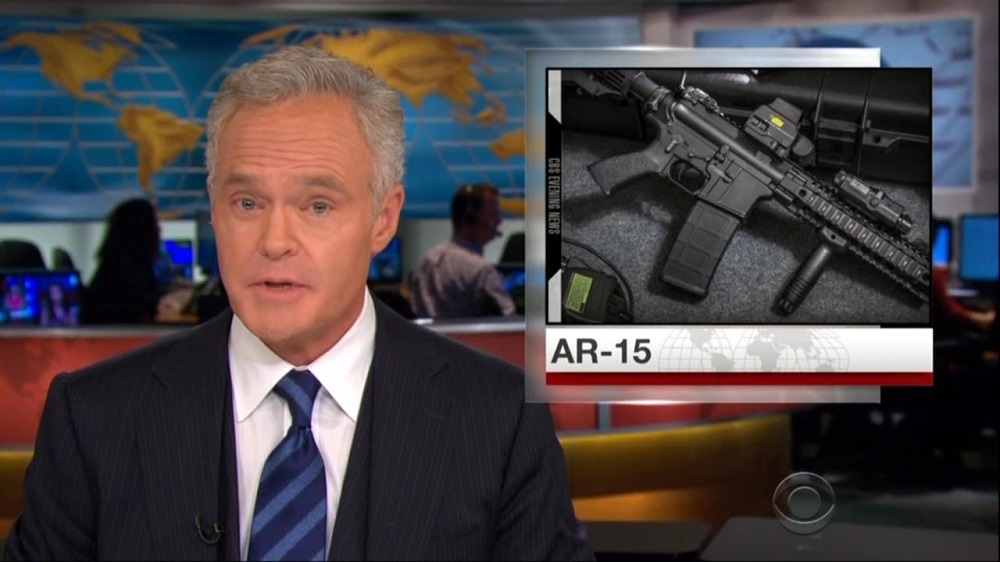 PELLEY: Nancy Cordes on Capitol Hill for us — thank you, Nance.

Dean Reynolds has more on the AR-15.

STEWART: It's a favorite among sportsmen, target shooters, and competitors. It's also popular as a home defense platform.

REYNOLDS: Lightweight and easy to master with about 30 minutes of instruction, the AR-15 was invented in 1959 for the military, but was modified for civilian use beginning in 1963.

STEWART: The AR-15 is America's rifle, and you're going to find more of those in safes at home than you'll find of any other rifle in the country.

REYNOLDS: Civilian use of the weapon is an abiding issue, though. There was once a nationwide ban on such assault weapons imposed in 1994, following a number of mass shootings in the 80s and 90s. When it was lifted 10 years later, gun rights advocates cheered, and sales rose. But the slaughter at San Bernardino and several other recent mass killings all shared a common thread: the shooters used an AR-15-style rifle.

The manufacture and sale of such weapons are highly-regulated in six states. But here in Highland Park, Illinois, they're not just regulated — they're banned, period.  Nancy Rotering is the mayor.

REYNOLDS (on-camera): To protect themselves.

REYNOLDS (voice-over): A lawsuit against the ban, which could have national implications, argues that it violates the Second Amendment. And while it is now before the U.S. Supreme Court, the mayor is undeterred.

ROTERING: If we all run around being afraid of being sued, where does that get you?

REYNOLDS (live): Now, we reached out to the local pediatrician who brought the lawsuit against the Highland Park weapons ban, Scott — but neither he, nor a representative of the Illinois Rifle Association, would agree to be interviewed.

LESTER HOLT: We're back from the southern California condo complex, where the San Bernardino killers apparently used their home as a staging ground for terror. The arsenal they were able to amass and use to murder so many has reignited the highly-contentious battle in this country over guns.

And as our Hallie Jackson reports, it's a fight with no easy answers.

AMANDA ROBINSON: I think it kind of shows that gun control doesn't necessarily fix the problem. The problem is the ideology of the people using the guns.

JACKSON: The Iowa gun range visited by Ted Cruz today — not calling off the campaign stop after the attack.

JACKSON: Republican candidates now arguing the conversation should be about terror control.

SENATOR MARCO RUBIO, (R), PRESIDENTIAL CANDIDATE (from campaign event): They're still out there talking about gun control measures; as if, somehow, terrorists care about what our gun laws are.

FORMER SECRETARY OF STATE HILLARY CLINTON, (D), PRESIDENTIAL CANDIDATE (from campaign event): A part of that strategy is to try to prevent terrorists from getting their hands on guns in our country.

JACKSON: Today, a provocative cover of The New Yorker; and on the Daily News, photographs of mass murderers — the paper calling them 'terrorists' — and including the head of the NRA.

Americans, who make up less than five percent of the world's population, own more than 40 percent of the world's guns, according to an international weapons research group — nearly as many guns as people now, and more sold recently. On Black Friday, a record number of background checks, coming at a time when many feel vulnerable.

[NBC News Graphic: "Americans Make Up Less Than 5% Of The World's Population, Own More Than 40% Of The World's Guns; Nearly As Many Guns As People; Source: Small Arms Survey; 185,345 Background Checks"]

JACKSON: The NRA releasing this video after the shooting in Paris.

LAPIERRE: The full-throated right to defend our families and ourselves with our Second Amendment.

JACKSON (on-camera): Many Senate Republicans argue they're defending that right, as they voted down a bill to ban people on the terror watch list from buying guns — a proposal Democrats call common sense.

JACKSON (voice-over): Congress reflecting the divide in the rest of America — both sides in this debate dug in. Hallie Jackson, NBC News, Washington.