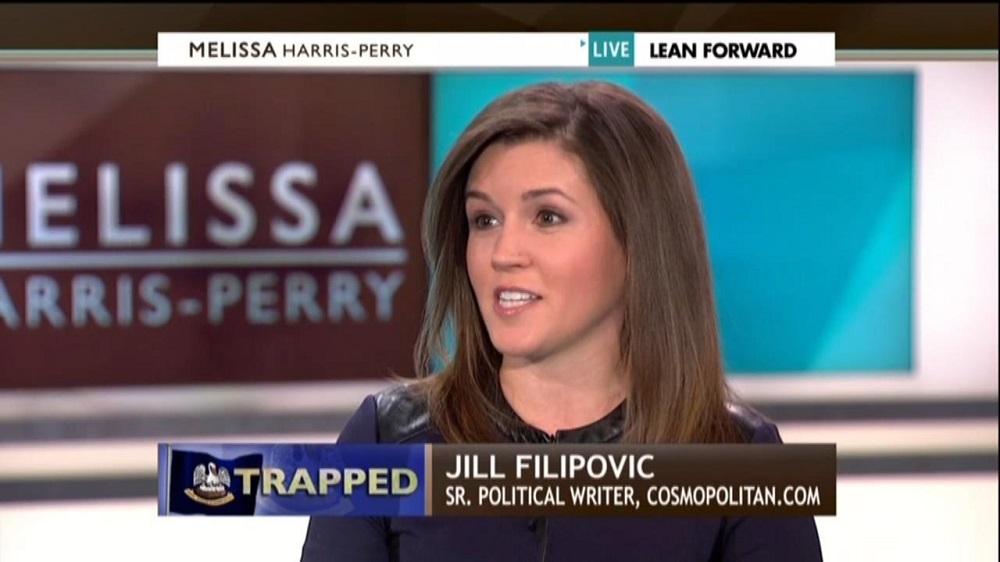 The long and short of Jill Filipovic's Friday op-ed in the New York Times was her outrage that the Catholic Church – and specifically, Pope Francis – still considered abortion to be a grave sin. The former Cosmopolitan political writer asserted that Pope Francis "offering forgiveness" to women who've had abortion is "a softer version of the same judgment: that the millions of women around the world who have abortions every year are sinners. Inviting women to feel shame and guilt for their abortions isn't a mercy; it's cruelty."

Filipovic, who was recently recognized by Planned Parenthood for her "media excellence" in defending the abortion giant, also decried how the pontiff wasn't "treating women as adults who make their own decisions," and asserted that the Church was "moving their rhetoric away from the condemnatory and into the patronizing."

The pro-abortion writer started spinning Pope Francis's recent move from the very start of her column, "The Pope's Unforgiving Message." She noted that the Bishop of Rome "announced this month that for a year...women who had terminated pregnancies could be granted forgiveness from Roman Catholic priests, instead of facing potential excommunication for their sins. It sounds like a step in the right direction: Mercy for women who have had abortions certainly seems preferable to condemnation." She continued by claiming that "mercy may actually be worse. While the pope's announcement has been hailed as evidence of the church's new, softer approach, it's actually the latest example of the modern anti-abortion strategy: Portray women as victims who need to be protected from themselves with laws that restrict abortion rights."

Filipovic then cited a July 2015 study that apparently found that the "a vast majority of women who terminate pregnancies in the United States don’t actually feel bad about it. In surveys, nearly all say it was the right thing to do, and positive feelings of relief or happiness outweigh negative feelings of regret or guilt for more than nine in 10 women, even years after the procedure." Of course, she cherry-picks research that supports her radical position, while leaving out how other studies have found that "women who had undergone an abortion experienced an 81% increased risk of mental health problems."

Just prior to dropping her "cruelty" accusation against the Pope, the former Cosmo political writer accused the Argentinian pontiff of condescending towards women, and played up that the "threat of excommunication, at the very least, makes the church's views on women's rights clear." She continued by acknowledging that many women do "feel very real guilt or regret around abortion; for some women, post-abortion emotions are complex." However, she added by claiming that "women primarily feel guilty when they experience stigma and a lack of support for their choice....He sends the message that Catholic women, who, according to surveys have abortions at roughly the same rate as non-Catholic women, should feel ashamed."

Filipovic later spent several paragraphs ranting about how the Pope's move is move about "savvy politics" than actually caring about the lives of unborn babies:

The move toward this version of mercy seems to be less about supporting women and more about savvy politics. The church surely has seen American anti-abortion groups racking up legislative and judicial successes by moving their rhetoric away from the condemnatory and into the patronizing (and most American priests, notably, have been able to forgive and not excommunicate women who have had abortions for years)....

The anti-abortion movement's refashioning of women seeking abortions from selfish tramps to weak-willed victims has been an effective move....after anti-abortion demonstrators had successfully morphed into 'sidewalk counselors,' a buffer zone law again reached the Supreme Court, and the court struck it down, reasoning that the individuals chasing women down the sidewalk "are not protesters; they seek not merely to express their opposition to abortion, but to engage in personal, caring, consensual conversations with women about various alternatives."

Pope Francis' announcement fits into this successful strategy. Rather than a step forward for women, it's a public relations move that covers for the real problems the church's anti-contraception and anti-abortion positions cause women around the world.

What the pro-abortion commentator glossed over is the fact that the Catholic Church isn't a latecomer in this merciful approach to women who either are considering or who've had abortions. There have long been ministries, such as Project Rachel (which was founded in 1984 – 11 years after Roe v. Wade), that have not only offered the Sacrament of Confession to post-abortive women, but also retreats, support groups, and assistance from trained psychologists.

Filipovic concluded her op-ed by hyping one specific instance from Brazil of the supposed "horrific outcomes" of the Church's "lobbying against abortion rights." She outlined how a nine-year-old girl "said she had been raped by her stepfather and was pregnant with twins, sought a legal abortion," and that "the local archbishop excommunicated the girl's mother and the doctors who performed the abortion — but not the stepfather. The child couldn't be excommunicated because she was a minor." Her parting shot at the Church: "Today, that girl is a teenager. The leaders of the same church that tried to force her as a child to bear her rapist's children now offer her mercy if she cops to her sin. Perhaps they should be the ones begging her forgiveness."