Tuesday's Good Morning America simply didn't have its facts straight in their rush to portray Pope Francis as a crypto-liberal. Amy Robach hyped that the pontiff "removed an outspoken critic of abortion and same-sex marriage from a powerful post within the Church. Conservative Cardinal Raymond Burke...was head of the Vatican's highest court." Robach then asserted that "this move is seen as reinforcing the Pope's vision for a more inclusive church."

However, Cardinal Burke is still the prefect of the Supreme Tribunal of the Apostolic Signatura – the equivalent of the Supreme Court for the Catholic Church. The Pope actually declined to renew the Wisconsin native's membership on a different consultative body at the Vatican – the Congregation for Bishops. [MP3 audio of Robach's news brief available here; video below the jump] 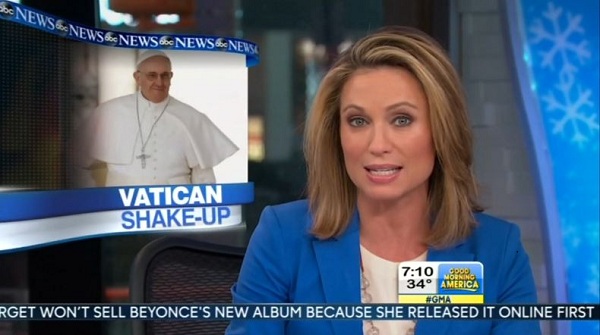 Robach's news brief is in the same vein as Time magazine's recent Person of the Year cover story about the Bishop of the Rome, where writers Howard Chua-Eoan and Elizabeth Dias. Chua-Eoan and Dias contended that supposedly, "in a matter of months, Francis has elevated the healing mission of the church...above the doctrinal police work so important to his recent predecessors."

CBS This Morning – one of Good Morning America's Big Three competitors – has also given wild, left-leaning spin about the pontiff. Correspondent Charlie D'Agata trumpeted that Francis was "one of the most progressive popes in modern times" during a September 13, 2013 report. Over a month earlier, his colleague Dean Reynolds bizarrely wondered if the Pope was "breaking with the Vatican" due to his widely-misrepresented "who am I to judge?" reply about people with homosexual attractions.

In a Monday post, Thomas Peters of CatholicVote.org's "American Papist" blog took aim at the "hyperventilating speculation" about Pope Francis' move with regard to Cardinal Burke. ABC's misleading reporting about the change is just the latest example of what Peters spotlighted.

AMY ROBACH: Well, a new shakeup at the Vatican – Pope Francis has removed an outspoken critic of abortion and same-sex marriage from a powerful post within the Church. Conservative Cardinal Raymond Burke, the former archbishop of St. Louis, was head of the Vatican's highest court. Well, this move is seen as reinforcing the Pope's vision for a more inclusive church. Today, he spent his 77th birthday visiting with the homeless.