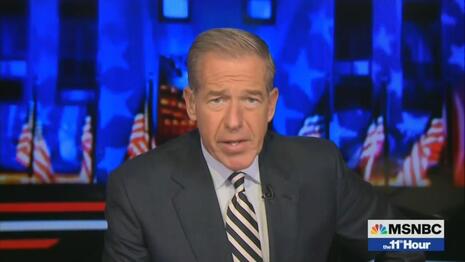 On Thursday night, it was curtains for Brian Williams’s 28-year career at NBC and sister network MSNBC. Incredibly, the serial liar remained employed for six years at MSNBC following the revelation that he had embellished and fabricated stories during his time at the Peacock network.

Williams’s troubles began trickling out on February 4, 2015 as a fable about having been shot down over Iraq was exposed and, six days later, he was suspended pending an internal review. By June 7, 2015, Williams had lost his job, but he was then named MSNBC’s breaking news anchor, which he assumed in September 2015.

After a rehabilitation tour and year-plus in that job, he received a weekday show on MSNBC, The 11th Hour.

It was originally meant to be a 30-minute traditional newscast and “cancel[led]” after the 2016 election, but the show that began on September 7, 2016 dragged on for over five years. Only now, is the 11th hour finally striking midnight.

Below are Williams’s 20 worst moments from MSNBC after his scandal (which actually marked his second tenure at the network), presented in chronological order with the date and the headline from their NewsBusters blog.

Given the hundreds of blogs since 2015, NewsBusters narrowed them down to moments said only by Williams (though we couldn’t help but include this Freudian slip). Sorry, Frank Figliuzzi.

1. February 1, 2016 — Seriously? Brian Williams Proclaims to Be the ‘Purveyor of Truth and Justice’

While covering the results of the Iowa caucuses, Williams warned viewers of “some data floating around, especially the internet” that would be dicey, but they could trust him (along with co-host Rachel Maddow) to “be the purveyors of truth and justice here.”

Brian Williams and his friends on MSNBC (and CNN) were ebullient following a Hillary Clinton campaign rally with then-President Obama, swooning that “he has a unique set of skills from the podium and as a communicator, he's not quite like anyone we've ever seen.

Needless to say, we’ll be returning to more posts like this.

Helming MSNBC (and, for a time, NBC via simulcast) the night when five Dallas, Texas police officers were murdered during a Black Lives Matter protest, Williams bizarrely decided to repeatedly fixate on the fact that the officers were killed in the same city that President John F. Kennedy was back in 1962.

Other than having died in the same city, the similarities ended, but that didn’t stop Williams from obsessing over it. Thankfully, he was roasted on Twitter over his fixation.

Williams was back covering another act of terror a week later as an Islamic extremist killed 86 people and injured over 400 when he drove a tractor trailer along the famous Promenade in Nice, France and, predictably, Williams put his foot in his mouth.

Giving his apologies to then-colleague Chris Matthews for having consumed his full hour of Hardball, Williams tastelessly told viewers that “[w]e have just plowed over the normal hour airtime of Chris Matthews tonight because of this confluence of breaking news.”

Here again, we had another Obamagasm. Reacting to Obama’s speech at the 2016 Democratic National Convention, Williams was bursting with infatuation: “It is tempting to say at this time we will not see his kind again. Strip away politics from that statement, for obvious reasons yet but for all the other attributes for the collection of things that he is, including but not limited to, rhetorical skill.”

On one of the first episodes of The 11th Hour, Williams was discussing Hillary Clinton’s health episode from two days prior when he declared: “Now because of the timing, her health revelations matched this pattern of so-called transparency narratives surrounding her.”

You certainly would know about “transparency” problems, Brian.

7. September 13, 2016 — Williams: Obama Is ‘A Communicator Who Can Deliver That Unlike Anything We Have Ever Seen’

Though the liberal media’s efforts to help elect Hillary Clinton were unsuccessful, Williams and his pals savored the final year of the Obama presidency as after another Clinton campaign rally when Williams said on The 11th Hour that the 44th President will be remembered as “a communicator who can deliver” with energy “unlike anything we have ever seen.”

Williams called into MSNBC following the death of Cuban communist dictator Fidel Castro and boasted of “the medicine system” in his last visit to Cuba that “they are very proud of” and that they still use donkey carts “because that’s exactly what they’d rather have for transportation.”

9. December 6, 2016 — Quite Possibly the Funniest Thing That Brian Williams Has Ever Said

Lyin’ Brian was still licking his wounds over Donald Trump’s upset over Hillary Clinton in the 2016 election when, just over five years ago, Williams made this ironic utterance: “As we talked about here last night, fake news played a role in this election and continues to find a wide audience.”

Talking about a CBS special between the then-First Lady and Oprah Winfrey, Williams could barely contain his excitement as he closed out that night’s show: “Michelle Obama is a formidable presence...Hugely popular, her initiatives have changed the public conversation, and her future appears limitless. So the question has to be asked, is a run for public office in her future?”

We add another moment of Irony Brian to our list as, in closing out a May 2017 show, he denounced Trump for having given “a me-note speech” and not a “keynote” to graduates of the Coast Guard Academy and lamented what grads must have been feeling.

Four years earlier, Williams did the very thing he claimed Trump had done when he gave the 2013 commencement address at Elon University.

While there were some moments when Williams copted to his profession living in a bubble detached from most of the country, this slip was slightly different as he admitted during a segment on tensions with North Korea that “our job tonight actually is to scare people to death on this subject.”

According to the longtime liberal journalist, it was an outrage that the United States used nuclear weapons to end World War II and stave off a ground invasion of Japan that would have resulted in possibly millions of deaths. And not only that, but the U.S. did so “in anger” as if it made the move even less justified.

This wasn’t the first time he leveled this as, back on May 27, 2016, he fired off this irksome trope.

In 2018, Williams peddled one of the seemingly endless examples of comparing Republicans to the Nazi Party, but it came in a bizarre way as he used a spat between Trump and the Philadelphia Eagles to attack the NFL by telling them to realize “that appeasement does not work” and “[g]racious surrender does not get you what you want.”

“Didn't work for Joseph P. Kennedy in the years before World War II, either,” he added.

In perhaps what might be everyone’s favorite moment on this list, Williams and New York Times editorial board member Mara Gay showed us that their math skills are worse than subpar as they claimed the failed $500 million presidential campaign by Mike Bloomberg could have been redistributed to the tune of $1 million each to every single American with “lunch money left over.”

However, the actual math showed it would have only been $1.50 per person.

These people can’t stop obsessing over the Russians, can they? Reacting to the mass looting and rioting following the death of George Floyd amidst the coronavirus pandemic, Williams argued the mass chaos (likely, in his world, due to Trump) was Russia’s dream come true:

I can't tell you how many people have been in touch with me today and tonight and last night to say some form of the following, which we would have laughed at five years ago. The Russians must be having a good old time looking at television images of the United States. Death toll of 100,000. A pandemic not at all under control. And now city streets aflame in more cities tonight than we can list.

With the chyron “TRUMP ECHOES SEGREGATIONIST GEORGE WALLACE” below, Williams griped to liberal historian Jon Meacham that Trump’s promise to support “law and order” and bring down crime made him a modern day incarnation of George Wallace.

This was despite the fact that, as our Brad Wilmouth noted, the phrase was also used in 1968 by Democrat Hubert Humphrey.

Bearing witness to the fact that nothing conservatives say or do will please liberals, Williams mocked Vice President Mike Pence for rhetorically going to a “gun show” by “baring his arms before a nation that hadn't asked to see them” so he could publicly receive his first dose of the coronavirus vaccine.

Lefties and public health officials have long encouraged public officials and other prominent individuals to share or post about receiving their jabs, but apparently Williams didn’t want one of the country’s most prominent Republicans to do so.

Oh, and he mocked the Space Force. How original.

Earlier this year, Williams had some choice words for Republican Governors Greg Abbott (TX) and Ron DeSantis (FL) in talking about Abbott’s support for securing the southern border: “If Abbott wants to, say, run for President, he must be more further ensconced in a particular area of Trump's anatomy than even Ron DeSantis of Florida.”

How old is Brian again?

We close our walk down memory lane with a humdinger as Williams had this deranged reaction to Fox News Channel host Tucker Carlson’s criticism of Joint Chiefs Chairman Gen. Mark Milley as a supporter of teaching critical race theory:

Fox News is on and virtually every mess hall and lounge in military bases foreign and domestic. So think about it, through the ranks they are going to hear Fox News refer to the chairman of the joint chiefs as a stupid pig.