The issue of Hillary Clinton’s attempt to hide her dramatic health scare from the American public certainly is a legitimate one. But, perhaps, Brian Williams isn’t the person to examine such a story. Yet, that’s who MSNBC had anchoring a discussion of the Democrat’s honesty, a man with his own questionable attachment to the truth.

On Monday night’s The 11th Hour, Williams showcased Clinton’s attempts to conceal her pneumonia: “Now because of the timing, her health revelations matched this pattern of so-called transparency narratives surrounding her.” So-called?

Talking to former presidential candidate Howard Dean, Williams fretted over the “Clinton conundrum.” Providing cover for the Democrat, he weirdly spun, “...There is more known about [Clinton], arguably, than any modern era candidate for president. And yet, this lack of transparency label sticks to her like Saran Wrap, what do you make of it?” 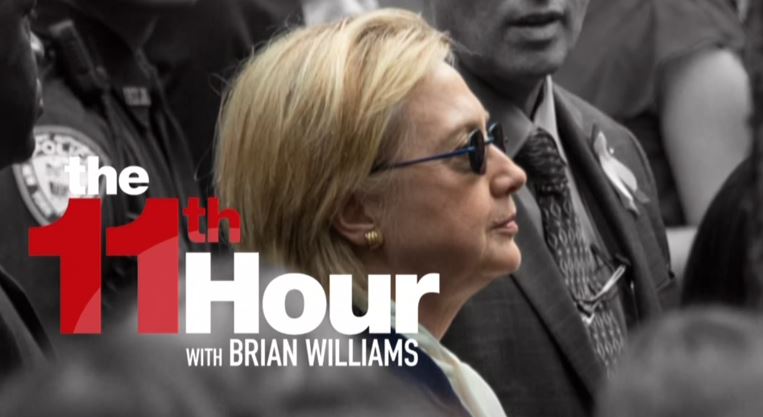 So, Williams is confused why an attempt to conceal information would make people consider Clinton not transparent?

Regardless, Williams is not the person to discuss this topic. This is the person who famously lost his Nightly News anchor job after exaggerating all sorts of stories, including attempts to make himself heroic and brave. In Kuwait, he referred to a helicopter ride, which did not face ground fire, as “Black Hawk Down meets Saving Private Ryan.”

Williams does not seem to possess a sense of proportion. During the Republican convention, he attempted to play up the supposed ethical lapse of Donald Trump’s wife, Melania, after a few lines of her speech appeared to be lifted from Michelle Obama.

During Williams’s show on Monday, Andrea Mitchell offered a tortured explanation for Clinton’s cover-up: “They are telling us today she was prepared to take questions from all of us. They assumed that we would ask what caused you to feel so faint, and she would say well, 'I actually have pneumonia.'” 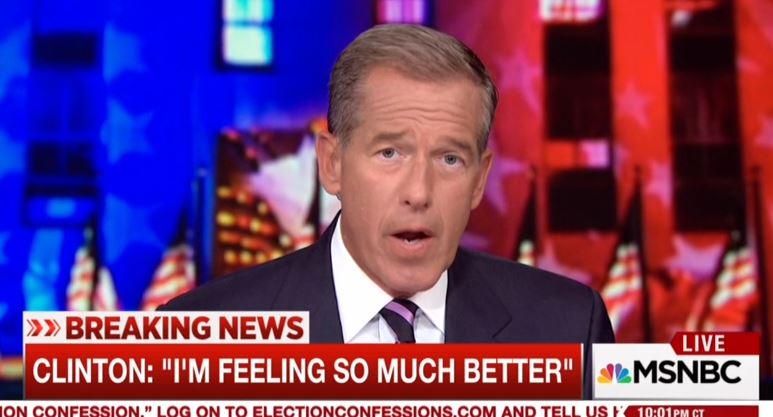 BRIAN WILLIAMS: Good evening from our headquarters in New York, I'm Brian Williams. This was a sick day for Hillary Clinton and a non-stop day of coverage for the news media. The former Secretary of State has pneumonia and gets dehydrated from time to time. But because a cell phone camera almost caught her passing out and because of a persistent cough, and even more internet rumors about her health, and because it took her campaign days to reveal her pneumonia diagnosis, tonight her health is a big story.

WILLIAMS: Now because of the timing, her health revelations match this pattern of so-called transparency narratives surrounding her. Critics have been tough already, Democrats included. Like this on Twitter today from former Obama adviser David Axelrod. Quote, “Antibiotics can take care of pneumonia. What is the cure for unhealthy pension for privacy that repeatedly unnecessarily creates problems?”

WILLIAMS: Andrea Mitchell, starting with you, you have had the longest experience covering this family, covering this woman. What have you learned that is new reporting tonight and what are you seeing in all of this that is very familiar to you?

ANDREA MITCHELL: Good questions, because what we're learning tonight is officials in the Clinton campaign saying there is no underlying condition of dehydration. Very quick to respond to my request for information on that. Certainly that was what was inferred from what Bill Clinton said to Charlie Rose on PBS, that this has happened a number of times. And It sounded as though that precipitated, or maybe it was a completely separate arrangement, the call to Anderson Cooper, where she said no, it happened twice in five years, the other time was 2012, when we know she had the stomach flu. She got dehydrated. She fell, hit her head. She had a concussion. They found a blood clot. They dissolved it with Coumadin, a blood thinner and she’s still on that Coumadine.They say she’s healthy. Bill Clinton said it took her about six months to recover from that concussion. She repeated tonight that it was very quickly resolved and that it was only a short amount of time she wore those glasses and that she then was recovered from it.

So it sounded as though this was an attempt to correct a misunderstanding, or mis-impression, or maybe facts. We don’t know. But they're pushing very hard on that. There is also a Politico story that they're saying is just not true. That she has a problem not drinking enough water. They are always pushing water on her. They say that that’s not — They say that’s a mis-characterization. What is familiar about this? Amy Chozick of the New York Times, who covers her as part of the traveling press pool and has written very insightfully about her past behavior and people trying to understand some of the motivation, some of the things that are inexplicable to people watching from the outside. This is the first instinct, to keep it private. They are telling us today she was prepared to take questions from all of us. They assumed that we would ask what caused you to feel so faint, and she would say well, “I actually have pneumonia.” But they did not tell us when she was first diagnosed on Friday and that is, I think, a self-inflicted wound.

WILLIAMS: And Howard Dean, you have been kind enough to join us from a satellite studio up in Connecticut tonight. Can you take on this notion about the Clinton conundrum? By which I mean, she made the point there is more known about her, arguably than any modern era candidate for president. And yet, this lack of transparency label sticks to her like Saran Wrap, what do you make of it?