Of all the people to take issue with President Trump’s Wednesday commencement address to the Coast Guard Academy, MSNBC’s Brian Williams explicitly and implicitly displayed his hypocrisy late Wednesday by knocking Trump for giving a “me-note speech” instead of a “keynote.”

Williams was speaking to failed McCain campaign official and fellow MSNBC host Nicolle Wallace on The 11th Hour when he invited viewers “to imagine the following as we run this next clip” before running through his imaginary world (which, after 2015, the world learned a great deal about).

“Your son or daughter is graduate from the Coast Guard Academy. On a hot, sunny, beautiful day, you've gathered for graduation. The President is the keynote speaker but, as one New York Times reporter instantly labeled it instead, gave the 'me-note' speech. Here’s part of the President’s remarks,” Williams complained.

Following a clip of the President lamenting his various pitfalls and horribly slanted media coverage against him, Williams sighed and let Wallace speak for him:

Williams can show his physical and verbal displeasure with Trump, but a self-centered college commencement address is something the disgraced ex-NBC Nightly News anchor knows a great deal about, as he gave one himself back in 2013 at Elon University as his son Douglas graduated.

As part of that, he threw his son a baseball in the middle of his speech. Now, it’s undeniable it was a cute and emotional moment, but if Williams wants to have a debate about self-centered speeches meant for someone else, that’s another matter.

Here’s a few portions of his remarks as written up by an article on Elon’s website and see if you can come away without thinking his address didn’t have a sniff of being a “me-note” as well:

““We were basically under the assumption we were losers unless proven otherwise in this country. It was just a grinding existence when we were coming up. You guys came along a little different. ‘Hey, mom and dad, I breathed today,’ and we would order the ice cream cake.”

“It's a generational mindset shift. If wasn’t your fault. We did it! We just thought, 'Oh my    God, we can't let them fail at anything! This is terrible!'”

Williams said that students today represent the first generation for which "hate via a ‘send’ button is assumed," that it's ubiquitous and expected, and that the corrosive effects are now baked into them.

“You are the first generation with the routine obsession of poring over imagery, pictures of yourself, hundreds, perhaps thousands of them that you feel best represent you to the outside world,” he said. “What’s any of that going to mean, long term? We have changed. We’ve gone off on our own with our devices, in just the course of one generation, and we haven’t put our arms around what this change means yet.”

On a separate topic, Williams got ahead of the curve from NBC’s Today on Thursday as he expressed glee less than 12 hours earlier that new Trump-Russia investigation Special Counsel Robert Mueller could dig up Trump’s tax returns fo the world to see.

Additionally, former Obama official and NBC national security analyst Jeremy Bash flashed his partisan position, agreeing with a statement Williams had made that while Mueller marked “a darker hour for the Trump Administration.”

Bash then added this point: “I think it's actually a brighter hour for the United States and for the rule of law.”

Here’s the relevant portions of the transcript from MSNBC’s The 11th Hour with Brian Williams on May 17: 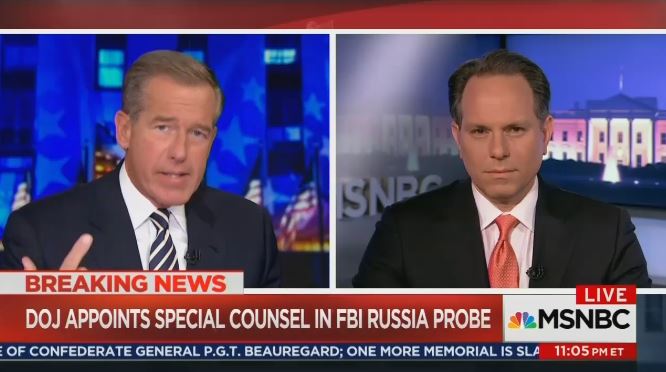 BRIAN WILLIAMS: If you asked me to name one person ideally to name this investigation, everyone would have come out at Bob Mueller. You could feel some of the pressure go out of this today as people knew it was going to be in good hands but at the same time, Jeremy, it landed like an anvil.

JEREMY BASH: Yeah, Brian, you said it's a darker hour for the Trump administration. I think it's actually a brighter hour for the United States and for the rule of law. If you read the Rosenstein order, and this was clearly the right decision by the Deputy Attorney General who actually signed as the acting Attorney general because, of course, the AG is recused. It was clearly the right decision and the right pick and the order, the Rosenstein order, is broad. It sets no time limits on the Mueller investigation. It basically says he can investigate any matter he wants to that arises out of the Russia matter and the trump campaign and third in his sole discretion he can prosecute federal crimes. It basically makes Bob Mueller the United States Attorney for the District of Donald J. Trump. 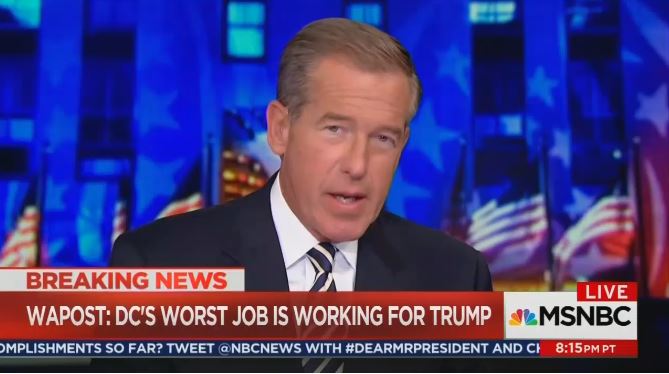 WILLIAMS: Nicholle Wallace, we’ve been talking about the President’s possible state of mind, what it’s like to work for him. The Washington Post reports an anonymous source saying they're go through stages of brief. I want you to imagine the following as we run this next clip.. Your son or daughter is graduate from the Coast Guard Academy. On a hot, sunny, beautiful day, you've gathered for graduation. The President is the keynote speaker but, as one New York Times reporter instantly labeled it, instead, gave the me-note speech. Here’s part of the President’s remarks.

PRESIDENT DONALD TRUMP: Over the course of your life you will find things are not always fair. You will find things happen to you that you do not deserve and that there not always warranted, but you have to put your head down and fight, fight, fight. [SCREEN WIPE] Look at the way I've been treated lately, especially by the media. No politician in history and I say this with great surety, has been treated worse or more unfairly. You can't let them get you down.

NICOLLE WALLACE: Yeah. So it's just what you want your 22-year-old to hear. First word, surety and complaints from the most important man in the world. I mean, this was stunning in that, in front of a group people about to embark on the most important chapter of their lives, he's complaining about the scrutiny he gets as the most powerful person in the world.