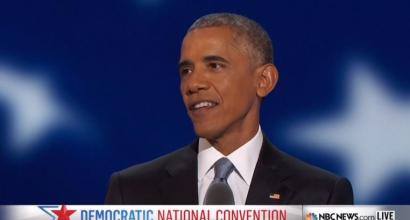 New York Times coverage of Night 3 of the Democratic National Convention could be characterized by an hour-long swoon over Barack Obama’s speech -- pardon, his “stirring valedictory address.” Also, Democrats were (again!) finding their voice on gun control, and Bill celebrated Hillary, TMI-style, and Frank Bruni celebrated the president as "our national poet."

Reporter Maggie Haberman, helping provide live nytimes.com coverage, was smitten by an introductory video: “Adam, as I watch this video, which is quite gauzy at points, it really does remind me that part of why Obama was re-elected in 2012, polls showed, was that a majority of people thought that his heart was in the right place and that he cared about people like them.”

During and after Obama’s speech Haberman hailed Obama’s style over any substance: “The man knows how to give a speech....It’s a dramatic moment....No matter what people think of Obama and Clinton, like them or don’t like them, the first black president just handed the baton to the first major-party female nominee in this country.....”

Taking the stage to rapturous roars of “We love you” and “Yes we can,” Mr. Obama acknowledged that Democrats were still divided after a bruising nomination fight and that Mrs. Clinton had made “mistakes.”

President Obama’s eyes welled with tears as he spoke of his faith in the American people and urged voters to transfer their trust to the woman he hoped would succeed him.

“Welled with tears” was a popular phrase in the Times’ convention coverage. Julie Hirschfeld Davis and Michael Shear used it in “The Diagnosis: Disunity. His Remedy: ‘This Fighter.’”

Mr. Obama’s eyes welled with tears as he spoke of his faith in the American people and urged voters to transfer their trust in him to the woman he hopes will succeed him. “Time and again, you’ve picked me up and I hope, sometimes, I’ve picked you up, too,” he said. “Tonight, I ask you to do for Hillary Clinton what you did for me.”

It was Mr. Obama’s lyrical rejection of “a politics of cynicism” 12 years ago to the night, as the keynote speaker of the 2004 Democratic convention, that dazzled a national audience and thrust him into the spotlight, setting him on his path to two terms in the Oval Office.

Davis consistently hailed Obama, from before the beginning to the very end of his presidency.

In his 2004 convention speech, a testimonial to John Kerry, the Democratic nominee that year, Mr. Obama decried the “spin masters and negative-ad peddlers who embrace the politics of anything goes,” and he foreshadowed the political theme that would ultimately carry him into the White House by urging “a politics of hope.”

Then as now, Mr. Obama was vouching for someone else, but what many Americans actually heard was a compelling argument for his own leadership.

It’s hard, frankly, to stop quoting from his remarks because they amounted to one of the most moving, inspiring valentines to this country that I’ve ever heard, brimming with regard for it and gratitude to it.

We’re going to miss this man, America. Whatever his flaws, he’s been more than our president. Time and again, he’s been our national poet.

This coming from the same journalists who mocked Reagan’s optimism and spent decades criticizing America for racism, sexism, heartlessness, etc...

And Patrick Healy showed Bill Clinton getting up close and personal with Hillary in the icky “Words Depict Feminine Side of Candidate as Strength.”

He spoke of desiring her: her thick blond hair, her flowery white skirt, her magnetic personality.

He was almost titillating as he recalled chasing after her and getting close enough to “touch her back.”

He used intimate details to reveal her feelings about his three marriage proposals.

In doing so, Mr. Clinton began redefining the American presidency as a female institution.

A Clinton win in November would obviously give the country a female president. But for 227 years, the presidency has been associated with stereotypically male qualities -- strength, resolve, fearlessness -- and the embodiment of power in a deeply patriarchal political system....

Whether his speech causes people to see Mrs. Clinton differently -- or makes people uncomfortable with the Clinton marriage all over again -- will become clearer in time, not only through polls but also in the chatter among voters.

The gush got unbearable by the end.

Political wives often make their husbands sound like saints. Mr. Clinton made Mrs. Clinton sound likable, which is no small thing in politics.

“I married my best friend,” he said. “I have lived a long, full, blessed life. It really took off when I met and fell in love with that girl in the spring of 1971.”

His implication was obvious. America would really take off as well, if voters would just fall in love with that girl, too.

Veteran congressional reporter Carl Hulse’s column, “Gun Laws, Long Avoided, Return to the Agenda,” was devoted to the Democrats (this time for real!) finding “their voice” on gun control. On a busy day for politics, it somehow made the front of Thursday’s paper.

After treating gun control as political poison for two decades, Democrats led by Hillary Clinton are again vigorously championing new gun restrictions as a central element of their campaigns.

Hulse saw current events as helping the Democrats (as he so often does).

But a string of mass shootings involving high-powered weapons, rising anxiety about domestic terrorism, and killings of and by police officers have emboldened Democrats. They say the shootings are intensifying support for gun control, elevating weapons policy to a top-tier issue, with particularly strong appeal to suburban female voters.

Nothing about the spate of terror attacks helping Republicans on national security issues.

Citing polls showing strong support for new restrictions even among gun owners, gun control advocates believe the public is open to expanded background checks, new limits on gun purchases and more scrutiny of gun manufacturers and dealers. They intend to enthusiastically press the case in races across the country.

Given deep Republican resistance in Congress, major changes in gun laws anytime soon seem unlikely. But the convention is demonstrating that Democrats have recovered their voice on the issue.