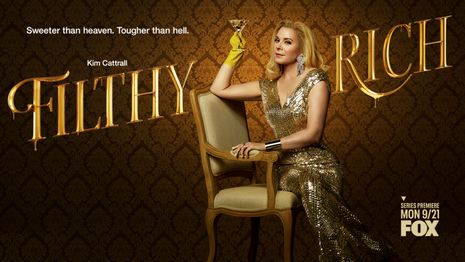 Three episodes in, viewers can already depend on Fox's Filthy Rich, about a wealthy televangelist family, to be as outlandish, sensational, and offensive as network television will allow.

The show follows the Monreauxs, led by Margaret (Kim Cattrall) after her adulterous husband Eugene (Gerald McRaney) is presumed dead. The Monreauxs discover Eugene fathered three other children and must contend with them, especially Ginger Sweet (Melia Kreiling), an empowered feminist referred to as a "sacrilegious slut,” who calls herself “that bitch” as a badge of honor and has a pornographic cam website to boot. The site provides the show’s most salacious content. This week's episode, “Psalm 25:3” on October 5, is no different.

Each episode title following the pilot is a Bible verse, this week's recited by Ginger. The pilot introduced us to her site ‘Sin Wagon.' There’s also ‘Saint Wagon,’ as episode two, “John 3:3,” revealed when Ginger emerged from her baptism in a see-through dress advertising the site on her body.

While this week isn’t as revealing with implied nudity, it’s still significant. Most of all, viewers are hit over the head with the message that Ginger is such a bad-ass.

Meanwhile, Christians are shown as hateful and intolerant; for example, the angry ones protesting Ginger outside the show, including a man who calls her, "You filthy, diseased whore!"

A consistent theme is how convoluted the show is. Everyone is trying to get ahead, using the Monreaux’s Sunshine Network. Is Margaret taking advantage of her network to get to Ginger? Is Ginger? Are others in on it? Who cares when such confusion is the least offensive part.

Margaret has Ginger on her show to discuss the baptism from the previous episode, which gives Ginger the opportunity to talk about feminism and "sacred prostitutes," compare herself to God, and recite the titular Bible verse in justifying her lifestyle.

Margaret: I’m not a firefighter, I’m just a concerned mother, [murmurs from the crowd] and I want this to be a teachable moment for everyone, because I believe that there are very good people on both sides of this situation. [Ginger laughs]  Why are you laughing, sweetie?

Ginger: By all means, carry on.

Margaret: Okay. Well, I want to start off by saying I don't think you're a bad person.

Margaret: But what you did-- well, that hurt me. That hurt a lot of people. You turned our holiest sacrament into a wet T-shirt contest, and I'm just wondering, do you think that the 2.5 billion people who believe in Christ are dumb?

Ginger: No, I don't. Oh. I believe in Christ, but is there no room in this dialogue for contrary, provocative thought?

Margaret: Oh, is that what you were doing, provoking an intellectually stimulating dialogue?

Ginger: Well, that's why you invited me here, isn't it? For a teachable moment.

Margaret: I am just trying to help you understand your actions-- they have consequences.

Ginger: Oh. So the stalkers, the hate mail, the spitting--I asked for it? (Laughs) Really shoring up those feminist bona fides there, Margaret.

Margaret: Is it feminist to sell your body on the Internet?

Margaret: So every prostitute is a feminist?

Ginger: Hmm. I didn't say that, and please don't infer that I am a prostitute, not that there is anything wrong with that. There have been sacred prostitutes since the beginning of time, Ishtar, Aphrodite. People understood that bodies were to be celebrated. Psalm 25:3, "No one who hopes in you will ever be put to shame, but shame will come on those who are treacherous without cause."

Margaret: The "You" in that scripture is God, not Ginger Sweet. (Audience laughs)

Ginger: Well, what's the difference if we both bring people to ecstasy? (Audience exclaims)

Ginger: Oh, I haven't even lit the match. (audience exclaims ) Men come to us desperate for connection, and we honor their trust. We provide what they're clearly not getting at home.

Margaret: Well, providing for a man-- that's a lot more than just stripping off your clothes. Isn't that right, ladies? (Cheers and applause)

Ginger: Well, if you had provided for Eugene, he wouldn't have had to step out with my mother in Las Vegas. Hi, Mom, if you're watching. And don't fool yourself, Margaret. It wasn't just sex. Eugene loved her. He came to her for salvation, and she gave him what you couldn't. Well, do you have anything to say?

Then, one Christian protester posing as a PA has to stick it to Ginger, shouting, "Rot in hell, you sinner!" while dumping a red slushy on her as the show comes back from commercial. Ginger is livid, thinking Margaret set her up.

Most, if not all, of these Christians are God-awful. The latest episodes have opened with Becky Monreaux praying (Olivia Macklin), though she is as intolerant and judgmental as can be in her prayers. And it’s only a matter of time before whatever Reverend Paul Luke Thomas’ (Aaron Lazar) secret is is revealed.

It turns out that of the men "desperate for connection" coming to Ginger's site, many of them are Christians. This includes concerned investors introduced this episode and "guys in Margaret's audience, her friends" who are recognized as customers. Ginger then decides, "The next time one of them signs in, record him. Record them all."

Eugene and Margaret’s son, Eric (Corey Cott), a married man whose wife is pregnant, has developed feelings for a woman he regularly chats with on Sin Wagon. Like an idiot, in this predictable storyline, Eric shows his face for the first time, as recording has begun.