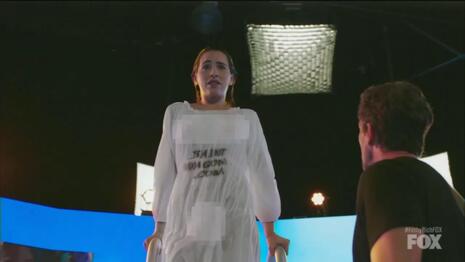 Fox’s Filthy Rich is only in its second week, yet it’s hard to see how it can get worse. The show follows the wealthy televangelist family, the Monreauxs, who learned their believed-to-be deceased father, Eugene (Gerald McRaney), fathered three illegitimate children. He has two children with his vapid wife, Margaret (Kim Cattrall). As if this weren’t enough, one of the three newly discovered children, Ginger Sweet (Melia Kreiling), runs a sex site known as ‘Sin Wagon.’ In a pivotal moment of September 28’s episode “John 3:3,” Ginger uses her baptism as a way to advertise another site of hers, ‘Saint Wagon.’

Viewers got a glimpse of ‘Sin Wagon’ in the September 21 “Pilot” episode, a pornographic web-cam site where men pay to view women in lingerie and costumes. It’s not hard to guess what’s going on.

Ginger is a thorn in Margaret’s side from the start, as she won’t accept hush money, and talks her siblings into doing the same. She won’t sign an NDA, either. She is also not shy about her site, which seems to empower her.

In the second episode, Ginger is moving further along with her sex sites. She buys out a sketchy motel where young women come to film, drink, and hang by the pool.

This episode explores how the Monreaux’s Sunshine Network is hemorrhaging subscribers. Margaret believes that baptizing Ginger on air could help with that, turning to Reverend Revered Paul Luke Thomas (Aaron Lazar) who leads many of the programs on the network.

The baptism takes place, interspersed with her very much alive father being baptized somewhere in the backwoods by a woman who had taken him in after his plane full of younger, partially dressed women, crashed. Unsurprisingly, Ginger, has her own agenda, as she rises and reveals the name of her new site on her body, visible through the dress she is wearing:

Reverend Thomas: We therefore were buried with him through baptism into death in order that we, too, may live a new life. Today we bury Ginger Sweet.

Margaret: You have a future with this family. I can see it.

Reverend Thomas: Ginger Sweet, you have opened your heart to the Lord. You'll serve him as your savior, and upon the profession of your faith… In the name of the Father, the Son, and the Holy Spirit. I baptize you Just as Jesus was coming up out of the water, He saw heaven being torn open. And the Spirit descending on Him like a dove.

Becky Monreaux: Holy hooters, I can see her areolas.

Ginger: Come visit saintwagon.com, where we guarantee you will rise again.

But wait! It turns out this scandal did help, since the spectacle earned them more subscribers. As horrifying as it was, in reality Maragret realizes she doesn’t mind while talking it over with her producer, Norah (Deneen Tyler), and family friend, Franklin Lee (Steve Harris), considering the results:

Reverend Thomas: I'm humbled by the spectacle you saw on this stage yesterday. Like you, I was alarmed by the-- let's call it what it was: Blasphemy. But do not cast a stone upon the sinner, for it's women like Ginger Sweet who remind us, the faithful, that we are at war with the devil. We are engaged in a battle for her soul and we will win. We must come together now as one Sunshine Network mission, subscribe to Sunny Club today, and join God's winning team.

Norah: You did it. Eight million and counting.

Franklin: The Reverend saved you.

Margaret: You know that's the Lord's work. The Reverend said we'd win either way, and he was right. When did winning mean losing your conscience?

Franklin:  You stayed above it longer than most.

Norah: And for better or for worse, today was a good day. Book Ginger on Wings of a Dove. Be good for her. Be good for everyone.

Ginger is also capitalizing on this, telling her girls it’s “time to save some souls,” and “hit it, bitches.” She loves to say "bitches" as another way to "empower" women.

The episode ends with the revelation that Margaret and Eugene’s son, Eric (Corey Cott), is a frequent subscriber to the site. He regularly talks to one girl, who, in this episode, wears an angel costume. They might even have feelings for each other even though Eric has a wife, Becky (Olivia Macklin).