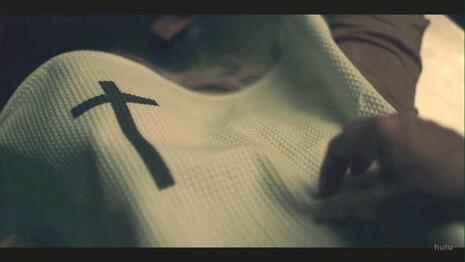 One of the small bright sides to the year 2020 was the delayed return of Hulu’s #Resistance series The Handmaid’s Tale. Now after almost twenty months, the show is back and as hateful as ever.

On April 28, Hulu premiered the first three episodes of the show’s fourth season. The premiere, “Pigs,” takes place directly after the season three finale where Handmaid June (Elizabeth Moss) helped 86 children as well as a few women escape into Canada out of Gilead, the religious oligarchy nation that was once the United States. While June stays hidden for the first two episodes, she’s finally caught in the second episode, “Nightshade.” By the third episode, “The Crossing,” she’s being interrogated by authorities to reveal the location of other Handmaids who helped the children.

Naturally, this involves a little torture, including waterboarding. Even more predictably, it involves more Christianity bashing by asking God to “bless” the torture and even the use of a cloth with a cross image that is put over her face.

Lieutenant Stans: Bless us, O Lord, for this holy service we are grateful to perform in Your name. In our search for justice, may You guide this sinner to righteousness and repentance. Amen. It’s alright, shh. All right then.

After everything the series has shown supposedly religious people do, it should be no surprise that they have them also literally support waterboarding. The show even makes sure to highlight that cross on the cloth for fear that after four seasons we wouldn’t understand their absolute hatred for Christianity. After four years of dour images, torture scenes, and blatant propaganda, I think we’ve gotten the point.

Even liberals are getting tired of this same game the show keeps playing. Since Biden has been elected, the show itself is struggling to find an identity outside hating conservatives and Trump. It could do everyone a big favor and just end now.