For a second year, the networks are favoring a march supporting abortion and other lefty causes over a march for life.

During their Saturday news shows the first evening of the Women’s March, ABC, CBS and NBC spent a total of 6 minutes, 43 seconds highlighting the event. In comparison, following Friday’s March for Life, the three broadcast networks spent just 2 minutes, 6 seconds on the pro-life rally. 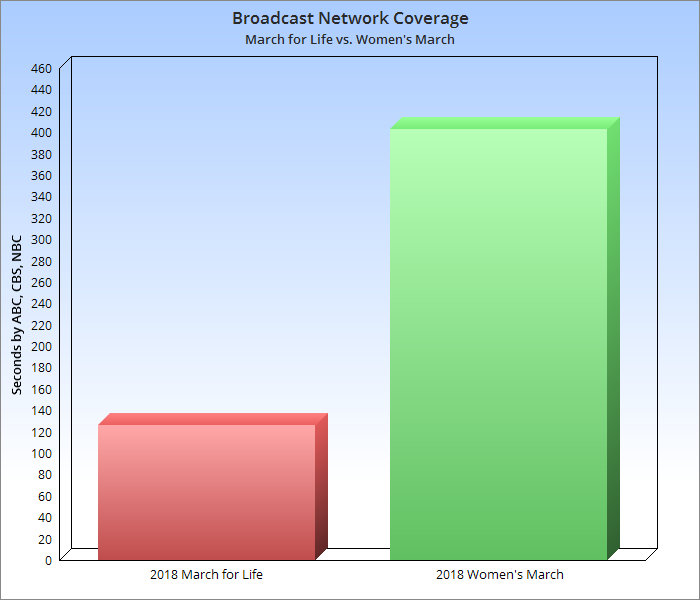 The first Women’s March, held the day after President Trump’s inauguration, aimed to mobilize women to tell the new administration that “women’s rights are human rights.” Except, according the march’s pro-abortion platform and its behavior towards pro-life organizations, “women” doesn’t include all women. That became even clearer when organizers removed pro-life group New Wave Feminists from its partner list last year.

And in the case, when it comes to time, the networks prioritized abortion supporters.

The 2018 @womensmarch at reflecting pool vs. the 2018 @March_for_Life on the mall. pic.twitter.com/k6aITlMHrp

Before the main Women’s March event even happened (scheduled for Sunday in Las Vegas), the news shows already covered the Women’s March three times more than the 2018 March for Life.

During Saturday’s Nightly News, NBC dedicated a whopping 2 minutes, 42 seconds to the Women’s March – more than the total the March for Life received Friday night. Anchor José Díaz-Balart remarked how women “took to the streets today, as they did a year ago, to demand equality, justice and social and political change.”

Form there, correspondent Morgan Radford reported on the “army of marchers” in “hundreds of cities” to demand “change in Washington.” She went on to interview Whoopi Goldberg, the founders of the Women’s March and Virginia delegate Kelly Fowler, who ran for office after last year’s march. NBC even played a clip of her young daughter wearing a sign reading, “Trump is mean.”

“An inspiration for millions of women hoping to change the face of politics,” Radford said of Fowler. 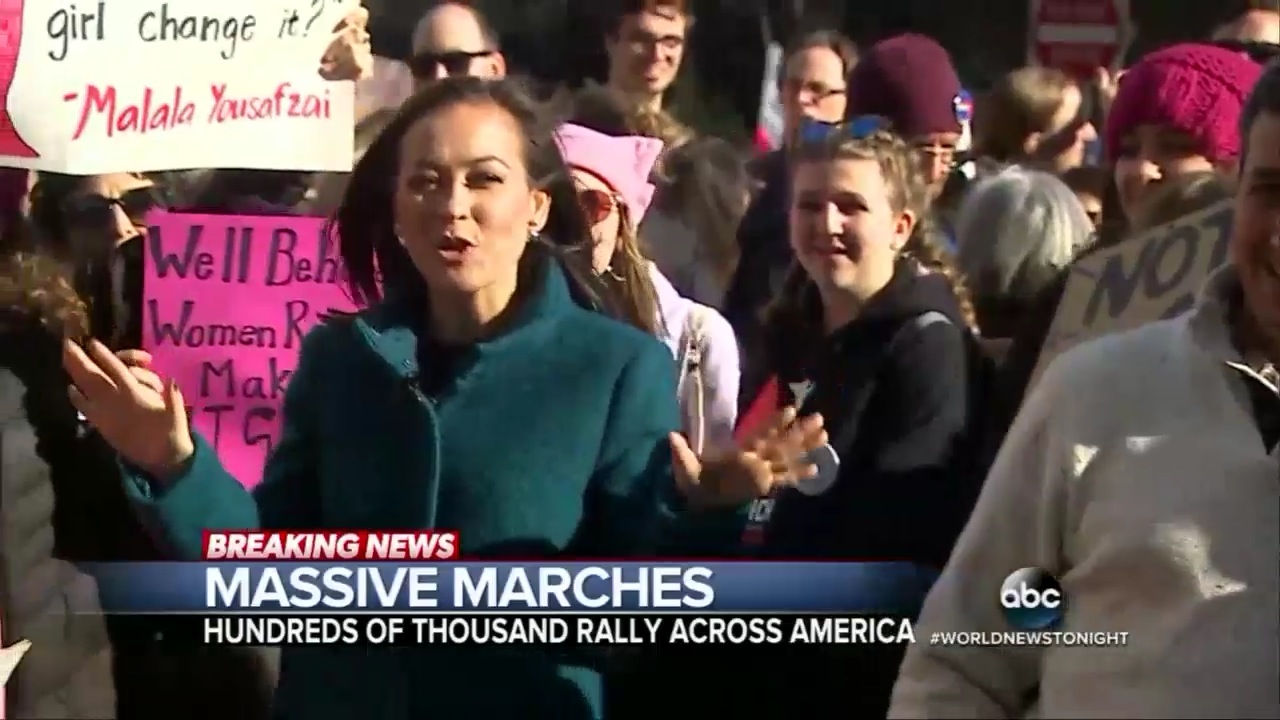 CBS followed NBC timewise, with a 2 minute, 2 second segment on the Women’s March during Evening News. Anchor Reena Ninan brought up the “thousands” of marchers who focused on “having their voices heard in November midterm elections.”

Reporter Paula Reid described them as a “sea of pink hats” who, in Washington, D.C., chanted, “Lock him up” of the president. She interviewed Emily’s List president Stephanie Schriock on how her organization, which trains “democratic, pro-choice” women to run for office.

Reid also gave assurance to critics – by interviewing one marcher who claimed everyone was welcome.

“The Women’s March has been criticized for only representing women on one side of the aisle, opposing a Republican president and then pushing for only Democratic candidates,” Reid admitted.

For World News Tonight, ABC spent 1 minutes 59 seconds. Following anchor Tom Llamas’ introduction, correspondent Eva Pilgrim reported on the “hundreds of thousands” of women with “crowds significantly larger this year” with 200,000 in New York. (Though there were certainly fewer in Washington, D.C. – something she didn’t say.)

“This crowd stretches for as far as the eye can see in both directions,” she stressed. “Everyone here marching for change.”

She concluded by saying that the crowd presented “lessons from the past and hope for the future,” and interviewed a marcher who compared the Women’s March to her mother marching in the ‘60s for “abortion rights.”

During their morning and evening news shows for the past five years (2013 – 2017, the broadcast networks have offered fewer than 24 minutes to the March for Life. To put that in perspective, ABC, CBS and NBC spent more than three times that on the Women’s March in 2017 alone, with 1 hour, 15 minutes, 18 seconds.

With their evening shows immediately following the 2018 March for Life on Friday, the networks combined spent a mere 2 minutes, 6 seconds on the pro-life rally. The networks that follow President Trump’s every move couldn’t devote more time to the event making history: for the first time ever, the president addressed the March for Life live via satellite.

Meanwhile, according to MRC Latino, U.S. Spanish-language television news leader Univision only dedicated 20 seconds to the March for Life Friday evening. In contrast, it offered 2 minutes to the Women's March Saturday evening.

UPDATE: This post has been updated to include numbers from MRC Latino.