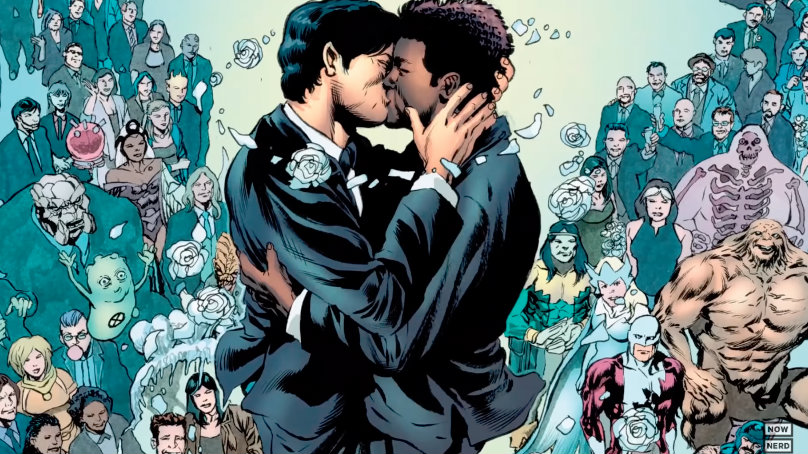 Both DC and Marvel are hellbent on a new diversity initiative, looking to capture the hearts of a “global” audience. Maybe the comic book giants figure they’ve wrung as much money as they can from the straight, mostly white heros of DC’s Arrow and Marvel’s Avengers. A lesbian “Batwoman” is on the way from DC, and Marvel has confirmed that soon we will get our first gay crimefighter.

The Hollywood Reporter wrote about DC Comic’s Batwoman being officially picked up by The CW. The new series features openly lesbian Orange Is The New Black actress Ruby Rose as the “out lesbian and highly trained street fighter Kate Kane/Batwoman.”

THR claimed this new DC hero configuration is a watershed moment for pop culture diversity, “the first live-action scripted drama series with a lesbian superhero.” Now that’s progress, and good news especially for all the folks tired of looking at the cis-normative Supergirl killing bad guys in her red and blue leotard. Mmmhmm, this superhero’s skintight suit will not be appealing to the dreaded male gaze.

Hollywood Reporter said this push for diversity is a focal point of CW’s “next generation of DC shows.” With its flagship series Arrow embarking on its final season, the time is now for some non-traditional content. (Good riddance to that straight white male mess by the way.)

Now if this marketing strategy sounds oddly familiar to you, recall that Marvel president Kevin Feige has also declared that the company would launch a more diverse superhero phase two of its own, with both and gay and possibly body positive (fat) heroes.

In a recent story published by Comicbook.com, the Russo brothers, who directed the recent Avengers: Endgame, spoke all about bringing better “representation” to a “global audience” with new more diverse characters.

Their first foray into this field was Joe Russo’s Endgame cameo as a gay minor character who has “finally started dating again five years after [Thanos’] Snap.” The Russos acknowledged that this was just a small step in pushing “larger” gay representation, assuring fans that “more is coming and sooner than we may think.” Wonderful.

“There is a gay character coming up in one of their films," Russo said. "I think Kevin [Feige] will make that announcement, I'm sure, pretty soon."

Marvel President Kevin Feige is quite proud of this diversity push. He cited the successes of both the heavily-African-influenced Black Panther and feminist Captain Marvel, justifying his company’s desire that the movies “reflect the audience and we want every member of our global audience to see themselves reflected on the screen… that's what we're focusing on going forward."

This might be an excellent opportunity for someone to create a new comic book universe -- you know, one where we can escape to from all the diversity initiatives.