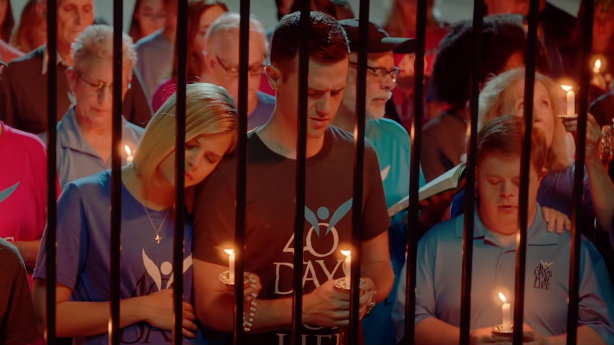 “A 15-year-old girl can get an abortion without her parent’s permission but she can’t see this movie without adult supervision?” Pure Flix Entertainment Executive VP Ken Rather recently said to The Hollywood Reporter. “That’s sad.”

Yes it is, but it’s true. The Motion Picture Association of America has slapped an R-rating on Unplanned, a pro-life movie from Pure Flix. The the film’s bloody abortion scenes earned it the rating. The filmmakers, who were pushing for a PG-13 rating, claimed the designation reflects an industry double standard that seeks to punish the movie for its “direct” depictions of abortion.

Pure Flix Entertainment is the same company behind Christian film God’s Not Dead. Unplanned tells the story of Abby Johnson, the former Planned Parenthood employee who, after witnessing the horrors done by the abortion giant, became a pro-life advocate. The filmmakers are seeking to reach viewers unfamiliar with Johnson’s story, and worry an R-rating might give a false idea of what’s in the film, and perhaps deter younger viewers.

The Christian Post reported on Monday that “while the filmmakers were certain they were making a PG-13 film, the MPAA has informed them that it will be rated R for ‘some disturbing/bloody images’ unless all scenes of abortions are removed or altered.” Obviously disappointed with the news, Pure Flix maintained that the movie would go forward with the adult rating, as they worry an official appeal “would delay its distribution efforts.”

Cary Solomon and Chuck Konzelman, the film’s co-directors, wrote a formal complaint to the MPAA, pointing to inconsistencies in the rating system. “We consider the MPAA’s current standards to be deeply flawed, insofar as they allowed scenes of remarkably graphic sex, violence, degradation, murder and mayhem to have a PG-13 rating, whereas our film, highlighting the grave dangers of abortion in a straightforward manner, is considered dangerous for the American people to view.”

Solomon claimed that the MPAA gave the R-rating because of three scenes “directly” addressing abortion. “It was clear that any meaningful treatment of the issue was going to be objectionable,” Solomon told Catholic News Agency, saying he believed the MPAA must see “anything that has to do with abortion is an act of extreme violence. Ironically that’s our viewpoint,” the director added.

According to Fox News, the ratings association claimed that this designation was “in no way politically motivated” and reflected the same standards of judgment as all other films. This ultimately involves a majority decision by an official panel of ten viewers -- “people from all walks of life … all of whom have children.”

Pure Flix Entertainment remains confident of the movie’s success. Company President Michael Scott stated, “We’re proud to be associated with this film and we are confident that our fans will not stay away because of the opinions of reviewers and listen to those in the faith community who have seen the film and agree with us. In this case, R stands for recommended," he added.

Unplanned will be released in theaters on March 29.