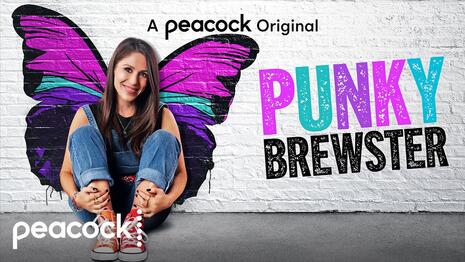 Remember Sunday nights in the 1980s when you turned on the tv to watch little Punky Brewster play in her treehouse with her friends? Did you ever think to yourself, “I hope they reboot this show one day with Punky as a New Age divorcée who has a gender-dysphoric kid. And they better make sure her best friend Cherie is a lesbian who gets engaged to an independent feminist lawyer.” Well, on Feb. 25, NBC’s Peacock streaming service delivered on that woke fantasy.

In the original Punky Brewster, Punky (Soleil Moon Frye) had a strong father figure in her loving foster dad, Henry, played by the late George Gaynes. Eighties television regularly included kind and confident father figures, usually with loving and equally confident wives. In the 1990s and early aughts, sitcoms replaced that positive father image with incompetent and useless dads who were an annoyance to their put-upon wives.

Nowadays, the father-figure is almost disappearing altogether. In the re-booted Punky Brewster, Punky (still Soleil Moon Frye) is a divorced mother of four children, including a new foster child like herself. Her ex-husband, Travis' (Freddie Prinze Jr.), role in the show seems to be as an emasculated BFF or emotional support puppet for Punky. In one episode, Punky calls him a “child” right in front of one of their sons. He, of course, is not offended or hurt at her demeaning him like that in front of their kids because, heck, she is just so spunky and cute! Her adolescent daughter also functions as her BFF, chatting with her about dating again. This new Punky Brewster wraps a lot of parental narcissism in cute eighties nostalgia.

Punky’s childhood best friend from the original show, Cherie (Cherie Johnson), is now the token lesbian character required on all television programming. And naturally one of Punky’s kids, Daniel (Oliver De Los Santos), may potentially be gender dysphoric. Her daughter and her friends dress the boy up in a sarong and have him strut around like in a fashion show. Nobody thinks it may not be healthy for the girls to be treating him like a play doll instead of a growing human being.

The parents research the various "genders" and Punky brings over Cherie and Cherie's girlfriend, Lauren (Jasika Nicole), to try to figure out where Daniel stands on gender questions. It leads to a ridiculous discussion about which Star Wars Lego they each would identify as. Lauren wants to be Commander D'Acy, "the first LGBTQ character in the 'Star Wars' universe."

Thank goodness Daniel does not say "Rey" or "Leia" because they probably would have had him at a gender clinic before the episode was over. He decides on Yoda, which the adults don't know how to interpret, and they ultimately do not call Daniel female.

After this episode the adults surprisingly leave him alone for the rest of the season and simply let him be, unlike many other shows in which the parents insist the boy is a girl. The show does not go off the usual cliff of changing his pronouns, calling him “trans,” and dressing him up as the opposite sex every episode. He remains a boy throughout the rest of the season with some interests similar to his sisters. For left-wing television, leaving the kid alone is an improvement.

The series also tosses in some occult references, now a constant signifier of the “cool” mom in shows geared toward women and girls. Punky burns sage sticks to get rid of negative energy and Cherie's girlfriend has a shaman. Christianity has been routinely mocked and vilified on television for decades. The active insulting of Christianity and Orthodox Judaism is now being replaced by the mainstreaming of occultism and New Age practices on tv.

This rebooted Punky Brewster does make me pine for the 1980s, but not because of the references to Madonna or The Breakfast Club. It makes me wish we could go back over thirty years to when fathers were not portrayed as mere extensions of a mother’s ego, nobody pushed children to break the “gender binary,” and shamans, sage sticks and thanking “the universe” did not replace a passing reference to church in the sitcom script.