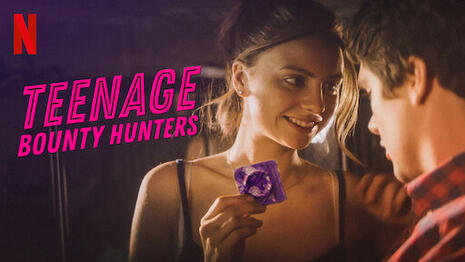 The girls attend a Christian academy run by a sweet, but clueless woman. From the very first episode, Teenage Bounty Hunters mocks and sexualizes Christianity. The show opens with 16-year-old Sterling using Bible verses to seduce her longtime boyfriend into losing their virginity to each other. After he wants to pray for restraint, she quotes gospel passages as she mounts him culminating in 1 Peter 4:8 "Above all, love each other deeply, because love covers over a multitude of sins."

[Video Warning: No explicit nudity, but not safe for work, either.]

The series only gets worse from there. By episode five Sterling and Blair are imitating stripper moves at a club hiding a woman who skipped bail. "Look at these women. They are so comfortable in their bodies. It is so cool," Blair says as the women pole dance for oggling men.

Why an adult like Bowser thought it was appropriate for high schoolers to accompany him to a club with women swinging naked from poles is anyone's guess.

In fact, many of Bowser's decisions with his teenaged assistants are disturbing. They accompany him to catch a drug dealer at a hotel. This leads to the three of them barging in on a graphic menage-a-trois between the drug dealer, the dealer's wife and another woman.

When Sterling is working on a class project with April, she tries to broach the subject of a relationship by suggesting that the biblical characters of Ruth and Naomi were really lesbians.

Sterling: You know who's also a really good team? Naomi and Ruth from the Bible. I really like that story.

April: Yeah, me too, actually.

April: Yeah. Two women left on their own who make the best of a bad situation, securing their fortunes without the help of a man?

Sterling: I read that they were together?

April: Yeah, of course they were together. Women couldn't travel alone back then.

Sterling: Yeah. It's the same Hebrew word, like Naomi cleaved to Ruth like how Adam cleaved to Eve.

Sterling: Well, what about Jonathan and David? Jonathan grew "full" thinking of David. "Full," like erect.

An LGBT lens needlessly eroticizes close human relationships. It routinely rejects the reality of non-sexualized intimacy between those of the same sex. And, of course, twists the Bible while doing so.

Eventually, April and Sterling end up in a brief romantic relationship, although by the final episode Sterling is considering returning to the boyfriend she deflowered in episode one.

The show is set in Georgia and takes numerous potshots at Southerners. The bounty hunters delay the arrest of a vigilante beheading confederate statues in the middle of night. They wait until she finishes beheading a final one before arresting her. Nobody ever suggested legal processes by which a town could vote to remove a statue if they so chose.

The vigilante had mapped out the statues she beheaded to form the shape of a penis. She saw this as an additional attack on "patriarchy."

Sterling and her sister Blair also display their feminist bona fides. When Sterling's boyfriend interrupts Blair once, Blair declares, "Of course, the man is co-opting the conversation." (The boyfriend is actually a pretty respectful and decent guy overall.) Are men really the only ones who have the market cornered on conversational interruption?

Christians in the show often come across as judgmental and hypocritical, unless they are openly and proudly violating Christian sexual ethics, in which case, they are nice people. As Sterling tells April, "Why should the Bible be a rule book for sex, anyway? It's 2000 years old."

When Sterling is kicked out of her Christian fellowship clique after revealing she is no longer a virgin, she tries to hang with a darker crowd. They invite her to help with some of the charity work they do with the Church of Satan. She decides the charity work is too much. In this series, the satanists are more charitable than the Christians.

The BARFs want young women to be angry, hypersexualized, sexually confused, and occult-interested. Parents cannot presume that a show geared towards either teens or children is "safe." A couple of the scenes in Teenage Bounty Hunters would have been considered downright pornographic for an under 18 audience just a few years ago.

Netflix has routinely been pushing inappropriate boundaries in its tween and teen programming. Skip Teenage Bounty Hunters and, if you have a kid, maybe skip Netflix altogether.