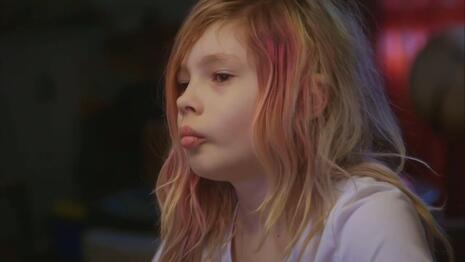 On Thursday, November 12, HBO premiered the documentary film Transhood, following the lives of four children and adolescents who "identify" (or whose parents have said they identify) as transgender.

The minors are 15-year-old "Leena," 13-year-old "Jay," 7-year-old Avery, and 4-year-old Phoenix (these are the ages they are first introduced as, the documentary takes place over 5 years). Little Phoenix is the only one who eventually rejects the dysphoria encouraged by his parents and accepts the way he was born.

Seven-year-old Avery's story is one of the most painful to watch in the film because the control and manipulation by Avery's mother is so blatant. Avery is the boy who infamously appeared on the cover of National Geographic's 2016 "Gender Revolution" issue as a "transgender girl." As it turns out, Avery did not want to do that National Geographic photo. In fact, Avery does not want to do most of the very public, attention-getting things his mother (who also gets lots of attention) makes him do.

As the National Geographic photographer arrives, Avery cries out, "You put me in everything and I don't approve of it," and runs to hide in his room. Eventually his mother, Debi, gets him out and he does the shoot. According to Debi, her 7-year-old said, "Her job as a trans person was to help change the world for other kids." At age 7, a kid's "job" is to play and have fun with friends.

Avery's father largely recedes into the background for most of the film. After nearly five years of trans publicity through important development stages of childhood, Avery so thoroughly resists being paraded in public any longer, that his mother finally relents and lets him just play with animals and enjoy activities at the local nature center instead. The end of the film tells the audience that Avery now only does "activist work" with his mother on rare occasions (though he apparently still believes he is a girl).

But Debi is not the only parent in this film who has an outsized role in pushing her child to do things he or she does not want to do. The mother of 13-year-old Jay, a girl who thinks she is a boy, tells the director flat-out, "My mother thinks I'm a child abuser." Jay dresses like a boy, cuts her hair short, and tells no one at school that she is a biological girl. Jay's mother says, "I'm gonna push him to come out and be who he's supposed to be."

Eventually, as Jay continues to maintain she is a boy, her mother and her lesbian "wife" start injecting Jay with testosterone. "Oh my God. Now it burns," Jay cries after the first injection, but they tell her she will get used to it. After years of hormones, she goes off to college at the end of the documentary looking and sounding like a boy.

Fifteen-year-old "Leena" is a boy who thinks he looks and sounds like a girl because he takes hormones, cakes on make-up and dresses in feminine clothes. He decided he was a girl at age 7 after his parents' divorce. Like many male-to-female transgenders, his make-up, mannerisms and looks are so "perfect" and cliched in their hyper-femininity that it is painful to watch as a real woman. His voice is clearly the voice of a transgender individual rather than a biological woman. At the end of the documentary, Leena gets castration surgery.

Only one child in the entire documentary avoids extended years of psychological abuse or permanent life-altering surgery and hormones. That boy is 4-year-old Phoenix.

"Well, a few nights ago, Phoenix said that he's-- she's a girl," Phoenix's big sister Lotus giggles to the director at the beginning of the film.

"I just like to wear girl things," Phoenix laughs.

"When he plays pretend, he's always a girl. He's a queen, he's a princess, he's a mom, he's a sister. But then, still, he'll correct people. He says, 'I'm a boy.' We say gender expansive, nonbinary, gender nonconforming, under the trans umbrella, gender awesome, girl-boy, rainbow boy-- we don't really have a good term," his mother, Molly, says. I know a phrase for what he is: a preschooler who likes to play pretend.

His parents take Phoenix to a LGBTQ religious ceremony at their Unitarian church.

Unitarian Minister: Good morning (All: Good morning.) Today, we choose to recognize, honor, love, and celebrate anyone here who would claim their identity publicly as lesbian, gay, bisexual, transgender, queer or questioning, intersex, pansexual, asexual, or any category that I've left out. [Laughter]

Molly: This is Phoenix. Can you tell them?

Molly: You're a little shy? Do you wanna tell everyone if you're a boy or a girl?

Phoenix: I just want to tell them that I'm a girl.

Molly: Okay. You can tell them that. Say that.

Molly: Okay. Phoenix would like you to know that she's a girl and she prefers "She" and "Her" pronouns. 'Kay, let's go this way.

All: May you be well, safe, and whole. We honor you exactly as you are.

As it turns out, Phoenix's father is working long hours, and his mother feels alone in raising their kids. Eventually, the loneliness for Molly and problems within the marriage lead to a divorce. Molly moves in with her parents and everything changes. Phoenix spend lots of time with his grandfather and plays with other boys at school. Phoenix announces he is a boy and never changes again in his insistence.

Toward the end of the film, Molly tells the director, "There's this whole little precious time in his childhood that is, like, a dark secret, which, in retrospect, I can't believe that happened. It was a huge mistake. Children are not transgender. He's a boy. He was born a boy. He's always been a boy. He'll always be a boy. And maybe there are people who actually are [transgender], and it's probably a mental disorder."

And that realization is the only sane moment in this entire documentary. The film is supposed to be a peon to transgender ideology. In reality, it is an inside look at the tragic effects on children of emotionally abusive parenting, broken homes and marital dysfunction.