'House of Cards' Comes Crashing Down on Abortion: Baby 'Not a Collection of Cells' 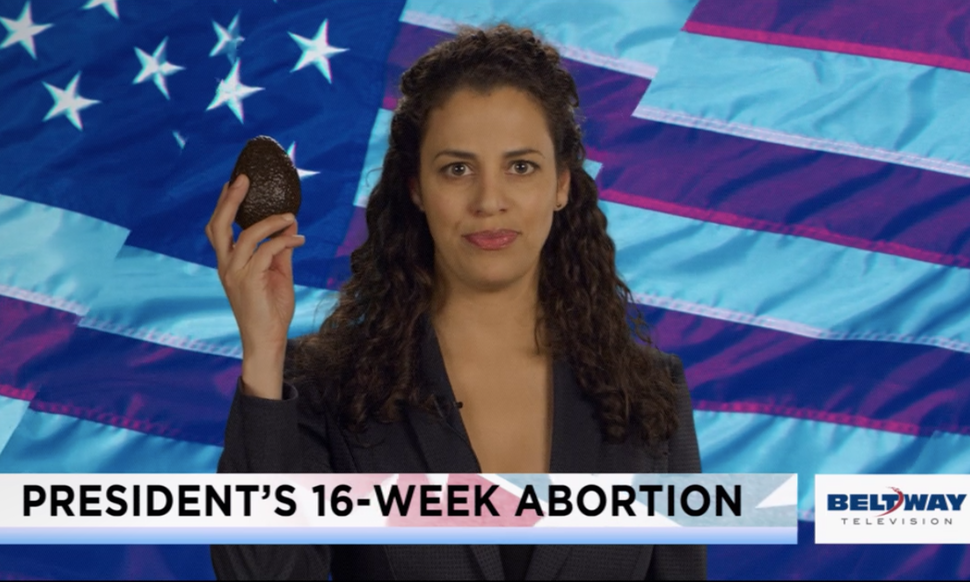 [SPOILER ALERT for key plot elements of the final season of House of Cards.]

If you thought the Netflix original political drama House of Cards was outlandish in the past, wait until you see how off the rails it goes in its final season while revealing some surprising truths about abortion and feminism on the way.

The sixth and final season of House of Cards, released on November 2, takes place following the death of former President Francis “Frank” Underwood. In case you’ve been living under a rock for the last year, Frank was prematurely killed off after the last season because the actor who played him, Kevin Spacey, was accused of sexual assaults and banished by the #MeToo #TimesUp movements in Hollywood.

Now his wife, Claire Hale Underwood (Robin Wright), is 100 days into her presidency. Both Underwoods are uniquely heartless and evil characters, having lied, cheated, and killed their way into the White House over the course of many years. With Frank dead, Claire is tying up loose ends and getting rid of anything or anyone with evidence of her past crimes.

Annette (Diane Lane) and Bill (Greg Kinnear) Shepherd, rich, powerful political siblings based on the Koch brothers, are introduced to complicate matters. Annette and Claire have a long history, having gone to school together, and Frank having a past affair with Annette, now they are more frenemies as each tries to use secrets from the past to gain the upper hand on the other.

In episode five, after Claire reveals the secret that Annette’s son, Duncan, is not hers biologically, Annette takes revenge by leaking to the press Frank's confession to her that Claire had an abortion when she was 16 weeks pregnant. “Who waits 16 weeks – what kind of person?” Annette asks.

We already knew Claire had had past abortions. A plotline in season 2 had Claire confess on national tv she to one, but she lied and said that it was because she was raped (to be clear, she had been raped, she just did not get pregnant from it, she conflated the timing of the abortion and rape to try to spin the story in her favor.)

As disingenuous as it may be (I don’t believe for a second that HoC is trying to promote a pro-life message to the masses), the significance of this second trimester abortion is made surprisingly clear with the visual comparison of the size of a 16-week old pre-born baby with an avocado:

Annette: Do you know how developed a fetus is by then? 16 weeks is beyond the beyond. That is what 16 weeks looks like. That is what I can’t get out of my head. I’m quoting Melody Cruz here, by the way, she just taped her segment due to run tomorrow. Visual aids and everything. For the first time ever, Americans will hear the story of a childless president who had an abortion, while married, at 16 weeks. I wanted to see your face. I wanted to see Frank’s betrayal register. Nobody can keep their mouths shut these days, not even to-the-death secrets are safe, it’s shameful. But honestly, what’s worse? That he betrayed your secret or that you waited until 16 weeks?

Claire: You and your party. Your moral rectitude, how convenient. You don’t even believe half of what you say, Annette. Run it. Cruz’s piece. Run it. And then go home and talk to Duncan about the beginning of life. But actually, before you go, I want to show you something. Come with me… Meet my new cabinet. I just wanted to see your face.

I am shocked that abortion is spoken about in such unflattering terms. So much of Hollywood’s mission has been to “normalize” abortion and liberals celebrate every time an abortion is treated as a casual event in entertainment.

Calling a 16-week abortion, which isn’t even considered late term, “beyond the beyond” is so refreshing, if a little sadly naïve. After all, the United States is still one of only seven countries in the world that allow elective abortions after 20 weeks and a 20-week abortion ban failed in the Senate in January. Roe v. Wade along with the definition of the health exception in its companion case Doe v. Bolton made abortion on demand legal through all nine months of pregnancy.

You may have noticed that clip ended with the grand unveiling of Claire’s brand new all-female cabinet. Previously, Claire fired her entire cabinet as they prepared to invoke the 25th Amendment against her, which she baited them into by refusing to leave the residence and acting crazy as part of her scheme. But, surely, the abortions, erratic behavior, and manipulations are all to be forgiven for this glorious strike against the patriarchy!

Episode six begins with news commentator Melody Cruz’s (Athena Karkanis) promised segment about Claire’s abortions and Madam President addresses the nation, once again lying about the circumstances of her abortion to deflect judgment and gain sympathy.

Cruz: Not one, not two, but three abortions, the third one at 16 weeks. Think about it, that’s not a few cells or a collection of cells, it’s more like four and a half inches long and three and a half ounces. At 16 weeks, the president’s baby would have been the size of this.

Claire: My follow Americans, there are certain parties out there that hope to use my private life for political gain. I’m going to say this exactly once: for many years my late husband and I tried to start a family. I downplayed that fact in the past because, well, it’s a painful subject. When I finally became pregnant, the baby wasn’t viable and the pregnancy had to be terminated. End of story. (The baby was viable, Frances and I as parents were not.) So, let me be clear, this is the last I will ever say on this subject.

Giving factual information about fetal development with (pardon the pun) an easy to digest fruit comparison is something the American people don’t get from the media covering the abortion debate. (At 20 weeks, a baby is about the length of a banana, by the way.) Thousands of viewers just got hit with some powerful truths; hopefully it’s taken to heart and not dismissed as just another example of HoC going over the top with outrageous exaggerations.

Telling a story of the heartbreak of losing a wanted baby is always the face put on second and third trimester abortions, but Claire’s cold aside that the baby was fine is closer to reality.

After hearing that Claire and Frank weren’t viable as parents, we find out at the end of the episode that middle-aged Claire is miraculously pregnant with Frank’s baby – I told you this show got wackier! Frank’s no longer viable, but Claire’s keeping (or purposely implanted) this baby because, according to their prenup, an heir automatically becomes Frank’s beneficiary, instead of his trusty henchman, Doug Stamper, to whom Frank left everything in a last minute change to his will.

At every turn, Claire is quick to imply or outright accuse people of misogyny. From the very first episode of the season, Claire has been playing the woman card. When a female soldier questions her, asking if she even has a plan that won’t get them all killed as she’s sending troops off to war, Claire dismisses the query with, “Would you have asked me that if I were a man?”

Having declared, “The reign of the middle-aged white man is over,” Claire milks her pregnancy for all it’s worth. As Annette says, “She's weaponized her feminism.”

At a women’s conference Claire rails against “American oligarchs,” i.e. the Shepherds, saying, “They want my finger off the nuclear button. And I have to ask, why do you think that is?” as she points to her pregnant belly. She pledges to fight for America, saying bizarrely, “I will be father, mother, leader and friend.”

Claire brings up misogyny again in the eighth and final episode when women in her own all-female cabinet start raising objections to her rush to war:

I couldn't sleep last night. For obvious national security reasons, of course, but also because the baby kept me awake. And for some reason the word "misogynist" popped into my mind. And I was trying to think of the word for the opposite. You know, the word for when a person hates men. Does anyone around this table know that word is? The word for when a person hates men? Anybody? I had to go and look it up. "Misandrist." And no one really knows that word because it's not used in our culture. So what I'm getting at, is maybe we all, regardless of our gender, would do well to examine the pre-conceived notions that we have about who can and cannot act as Commander In Chief.

I believe the word for when a person hates men is “feminist,” but I digress.

In the final shot of the series, a heavily pregnant Claire sits alone on the floor of the Oval Office having just disposed of the last evidence of her crimes, suffocating Doug Stamper after stabbing him in the gut. The first female president rules alone, a Shakespearean body count left in her wake. This is what a feminist looks like.