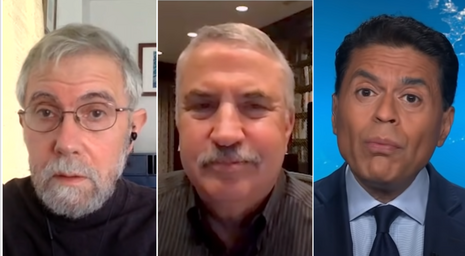 New York Times foreign affairs columnist Tom Friedman spewed in an absurd March op-ed headlined, “The Biden Boom,” that Biden had a “chance to supercharge the economy.” He argued: “Biden’s stimulus will fuel an already restructuring economy and supercharge it.” He said concerning Biden’s gargantuan stimulus that “there are lots of signs that we could be headed for just such an explosion in entrepreneurship.” But Friedman wasn’t alone. A number of snake oil salesmen in the media have been trying to sell Biden’s leftist economic agenda to the American people as some sort of miracle panacea.

Fellow Times columnist Paul Krugman also made a fool of himself predicting a “Biden Boom” as early as November 2020. A nutty op-ed by Krugman from July 2021 was headlined, “It’s Morning in Joe Biden’s America.” CNN Host Fareed Zakaria praised Biden’s agenda in an April op-ed headlined, “How Biden’s New Deal can really make America great again.” In the op-ed, Zakaria fawned: “Trump claimed he wanted to ‘Make America Great Again,’ President Biden is attempting to actually do it.” But months of high inflation, labor shortages, supply shortages and spiking gas prices have soured the national mood.

A new Axios/Ipsos poll of 1,038 U.S adults found that “[c]onfidence in President Biden's ability to rescue the economy from COVID-19 has dropped since January.” Confidence has dropped from 52 percent at the beginning of the Biden presidency down to 44 percent now. Here’s the eye-opener, according to Axios: “It's Democrats and independents driving the declining economic confidence.” The results of the Axios poll show Americans are clearly not buying the pro-Biden media’s salivating.

The Axios poll isn’t even the only survey showing Americans rejecting the pro-Biden propaganda. A new CNBC All-America Economic Survey found that a 54 percent majority of Americans disapproved of Biden’s handling of the economy. An August Morning Consult poll showed that 59 percent of Americans blamed Biden for inflation.

It’s hard to take Friedman, Krugman and Zakaria’s predictions of a rip-roaring economy under Biden seriously given a recent news item in The Times headlined, “The Economic Rebound Is Still Waiting for Workers.” The Times even published an article Tuesday headlined, “Rising Prices, Once Seen as Temporary, Threaten Biden’s Agenda.” In addition, The Washington Post conceded recently on inflation that “American families and businesses are altering their habits as they increasingly believe high prices are here to stay.” Yahoo! Finance Live Anchor Brian Sozzi even wrote Oct. 25 that “the reality is that hyperinflation — or an extreme rise in prices in a short period of time — is beginning to happen right now.”

Conservatives are under attack. Contact The New York Times at 800-698-4637 CNN at 1-(404)-827-1500 and demand they correct the record on Friedman, Krugman and Zakaria’s haphazard pro-Biden propaganda respectively.