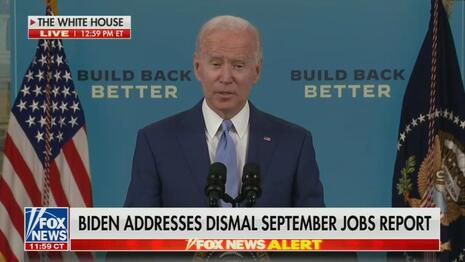 Inflationary pressures on the U.S. economy are getting so bad that even The Washington Post acknowledged that media arguments banging the transitory drum are falling flat.

Long reported that “[n]ews this week that U.S. inflation is running at a 13-year high of 5.4 percent confirmed what many Americans already know as they juggle their budgets: Food, energy and shelter costs are all rising rapidly, adding to the strain Americans were already dealing with from the higher costs of hard-to-find goods such as cars, dishwashers and washing machines.”

Housewares and beauty-product company Helen of Troy CEO Julien Mininberg dropped the cold hard truth to Long: “‘We’re assuming that the inflation is not going to be transitory, and we’re positioning ourselves accordingly.’”

So much for New York Times economist Paul Krugman’s absurd dismissal that skyrocketing inflation and hiring problems were “transitory” and “temporary.” In September, the economist exclaimed in an op-ed, “Wonking Out: I’m Still on Team Transitory.” Yahoo News published a spin piece in July headlined, “July data reveals 'significant cooling in transitory inflation.’” In May, Bloomberg News also tried to downplay the threat of inflation: “Fed Officials Have Six Reasons to Bet Inflation Spike Will Pass.”

In fact, Long specifically went after policymakers who are still gaslighting the inflation issue in an Oct. 15 tweet: “Policymakers keep saying inflation will be temporary, but rising rents challenge that view and pressure Washington to react.” In her news item, Long noted that workers are demanding pay increases “because they can see their wages aren’t buying as much with so many everyday necessities costing more, including rent.”

Such behavior risks the wage-price spiral phenomenon, which “often leads to sustained high inflation that forces the Fed to step in to stop it,” Long said. Americans are starting to feel the heat of inflation on their day-to-day living, according to Long’s analysis:

Rising rents are fueling inflation. Rents surged at the highest level in September since 2001.

Policymakers keep saying inflation will be temporary, but rising rents challenge that view and pressure Washington to reacthttps://t.co/TkCYSDgEpJ via @jeannasmialek

Numerous polls and consumer sentiment surveys “show inflation has become a top concern for many Americans. And people are predicting inflation will stay high.” But the reality of spiking inflation hasn’t stopped liberal media outlets from trying to go from dismissing the threat of inflation to spinning the terrible economic situation in a manner that benefits President Joe Biden.