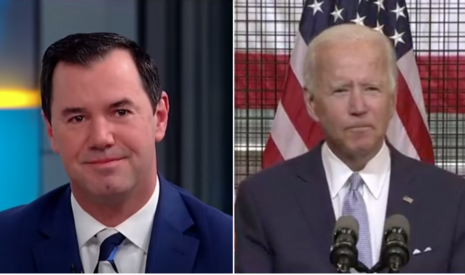 This comes after the pro-Biden liberal media has dragged the country through nearly four years of mind-numbing anti-Trump political hell.

With a potential new presidency at hand, the media have barely made Biden have to defend much — if any — of his leftist policy agenda. This is especially true of how the media has handled coverage of Biden’s radical economic agenda. As Concha put it in his latest commentary: “Choreographed. Hospitable. Risk-averse. If you’re looking for words to describe the average Joe Biden press conference, there’s your top three.”

Concha perfectly summed up the media’s pro-Biden behavior via “a rare press conference” held Monday: “Exhibit A was on display Monday afternoon during a rare press conference with the president-elect that included questions that can't even be called softball, but more like T-ball when putting a beach ball on the tee. The most disturbing part was what has become a theme at Biden pressers, which is to have a staffer choose which reporters ask questions, as opposed to Biden randomly calling on them instead.”

Concha continued: “Think about that for a moment: The next leader of the free world needs a staffer to call on a predetermined list of reporters who the campaign apparently feels won't press their guy too hard.”

As Concha argued, the press conferences Biden has held as the Democratic nominee have consisted “mostly of questions about President [Donald] Trump.” But here’s the kicker: Concha noted that there have been “very few questions about Biden’s own worldview, record, policy stances or perspective on important issues such as trade, foreign affairs, gun control, immigration, education, or taxation as it relates to repealing the Trump tax cuts.” [Emphasis added.]

Even more telling, was Concha’s note that, of the 12 questions reporters had pitched to Biden Monday, "there were zero follow-ups. Zero interruptions during answers. Zero questions about any of the issues above, which rank as among the top concerns on voters' minds, along with the coronavirus.”

Concha’s highlight of the media’s blackout on Biden’s agenda is very important, especially concerning his tax and spending plans. The liberal media-at-large have barely probed or reported at all about the disastrous implications of Biden’s leftist economic agenda. Instead, the media peddle situations like CNN trying to hoodwink Americans by falsely claiming that it’s “unlikely” Americans will see higher taxes under Biden’s administration. Yahoo! News also defended Biden’s tax plan along similar lines.

Concha contrasted the Biden press conference with then-President-elect Trump’s first press conference during his transition, which Concha stated was much more combative. In that event, Concha said that reporters “broached Russia or Putin 13 times, with the implication being that Trump could not have possibly won on his own without major help from an outside entity to impact the result under the ‘guilty until proven innocent’ line of questioning.”

Based on Concha’s assessment, we’re gearing up for a full-blown “marshmallow media” under Biden if indeed he begins his administration in January. The media will effectively become the unofficial propaganda arm of the Biden presidency.

If you think anything will change after Jan. 20, think again. We saw it throughout the campaign. We see it now in the transition. And we’ll see it in a Biden administration — a carefully choreographed, risk-averse and packaged president who will provide a fraction of the access that Trump has.