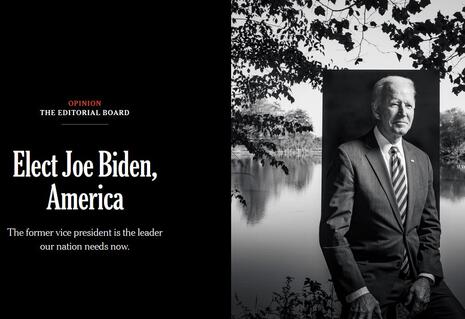 With just five days to go, polls show a tight race in many of the key battleground states. But one place where the race isn’t tight: newsrooms across America. The country’s newspapers have absolutely thumped Donald Trump in their official endorsements, favoring Joe Biden by a count of (88) to (7).

Out of a total of (95) newspapers that have offered an editorial on who their readers should vote for, 88 (93 percent) of them have endorsed Joe Biden. Only seven (The Las Vegas Review Journal, Santa Barbara News-Press, Arkansas Democrat-Gazette, The Spokesman-Review, The New York Post, The Washington Times and Boston Herald) have advised voting for Trump.

Most of the major newspapers (largest reported circulation of 48,000 or more) that endorsed Biden this year also favored the Democratic candidate Hillary Clinton in 2016. There were a few notable exceptions. Chicago Tribune flipped from endorsing Libertarian Party candidate Gary Johnson in 2016 to endorsing the Democratic nominee in 2020. New Hampshire Union-Leader supported Johnson in 2016 and is for Biden this time. USA Today is endorsing Biden this year but in 2016 they favored anybody but Trump. The Oregonian and Orlando Sentinel did not endorse any candidate in 2016, but are now firmly in the Biden column this year. 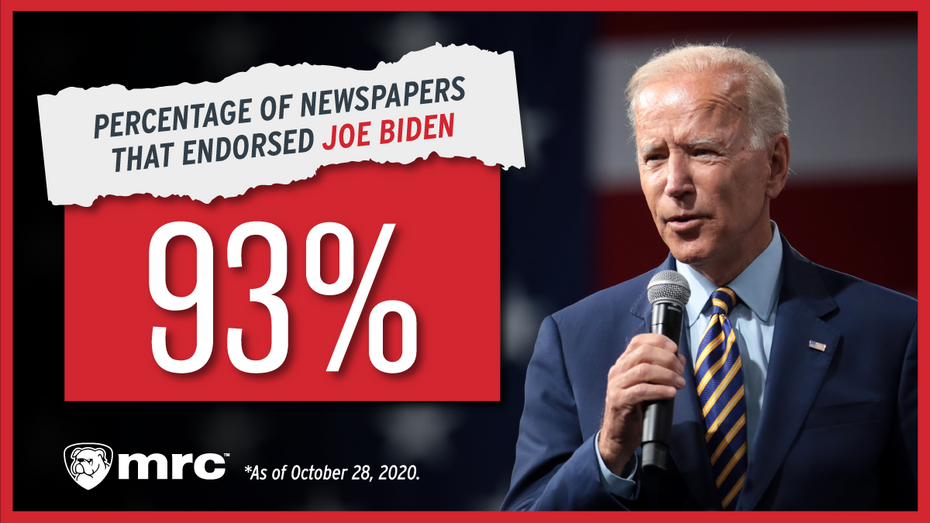 On October 6, The New York Times editorial board picked Biden to restore a “weaker, angrier, less hopeful” and “exhausted nation”:

Joe Biden has vowed to be a president for all Americans, even those who do not support him. In previous elections, such a promise might have sounded trite or treacly. Today, the idea that the president should have the entire nation’s interests at heart feels almost revolutionary.

Mr. Biden has also vowed to “restore the soul of America.” It is a painful reminder that the country is weaker, angrier, less hopeful and more divided than it was four years ago. With this promise, Mr. Biden is assuring the public that he recognizes the magnitude of what the next president is being called upon to do. Thankfully, he is well suited to the challenge — perhaps particularly so.

In the midst of unrelenting chaos, Mr. Biden is offering an anxious, exhausted nation something beyond policy or ideology.

USA Today on Tuesday endorsed Joe Biden for President. The paper was so excited about choosing the Democrat that the editors highlighted the announcement on the front page, above the logo: “For the First time, an endorsement. The USA Today Editorial Board breaks with tradition to endorse a candidate, Joe Biden.”

“Given that USA Today has never, technically, endorsed a presidential candidate before, the paper touted this as historic and important. But, as the opening paragraph of the 1775 word pronouncement noted, just four years ago the paper demanded that Americans not vote for Trump. That, of course, is very close to endorsing Hillary Clinton.

Four years ago, the Editorial Board — an ideologically and demographically diverse group of journalists that is separate from the news staff and operates by consensus — broke with tradition and took sides in the presidential race for the first time since USA TODAY was founded in 1982. We urged readers not to vote for Donald Trump, calling the Republican nominee unfit for office because he lacked the ‘temperament, knowledge, steadiness and honesty that America needs from its presidents.’ We stopped short, however, of an outright endorsement of Hillary Clinton, the Democratic nominee. This year, the Editorial Board unanimously supports the election of Joe Biden, who offers a shaken nation a harbor of calm and competence.”