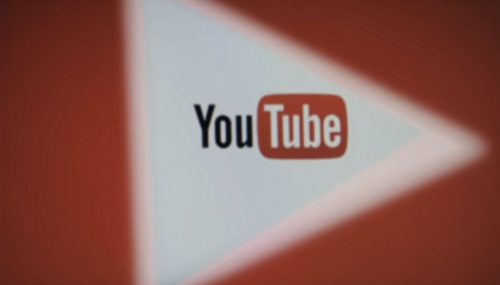 In an article posted Saturday for The American Spectator, longtime economist and former presidential speechwriter Ben Stein revealed that YouTube had suspended his economic and political show, The World According to Ben Stein. On the most recent episode, Stein discussed why people who have been vaccinated against COVID-19 have contracted it. 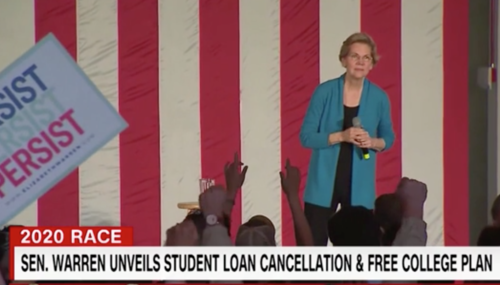 Business
Julia A. Seymour
April 25th, 2019 9:46 AM
A $1.25 trillion giveaway program to college grads and future college students deserves scrutiny, not praise as a “bold,” “sweeping” or “ambitious” plan that could “distinguish” Sen. Elizabeth Warren from her Democratic competitors. Some news stories, including CBS and NBC online, bordered on being a sales pitch for the plan to forgive student loans and make public colleges tuition-free. CBS… 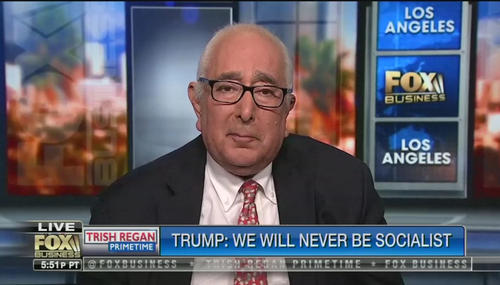 Business
Julia A. Seymour
February 20th, 2019 9:30 AM
Economist Ben Stein provided a harsh reality check of socialism, as youth, politicians and the media turn ever leftward. His criticism of socialism and the Green New Deal sharply contrasted with recent liberal media reactions. 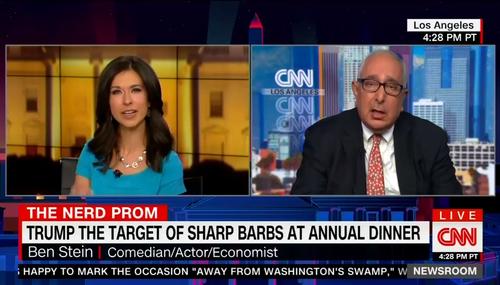 Brad Wilmouth
April 30th, 2017 10:49 PM
As Ben Stein appeared as a guest on Sunday's CNN Newsroom, host Ana Cabrera was visibly surprised that the right-leaning actor and economist slammed Hasan Minhaj's anti-Donald Trump jokes as "sickening" as the two discussed the liberal comedian's appearance at the White House Correspondents' Dinner. Stein also called out the media as a "joke" and a "sharp instrument of the left" that are… 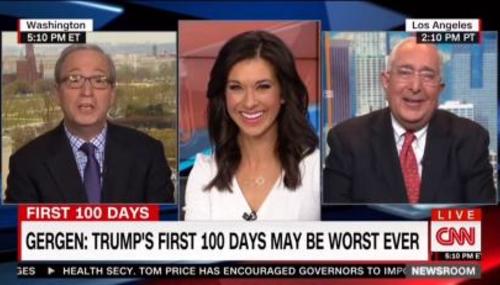 Brad Wilmouth
March 25th, 2017 9:53 PM
CNN political analyst David Gergen's recent hyperbolic claim that Donald Trump may have had the worst first 100 days of any President in history was so over the top that even his CNN colleagues are still laughing at him the day after.  On Saturday's CNN Newsroom, after right-leaning actor and former Gergen subordinate Ben Stein jabbed his former boss by recalling how bad Abraham Lincoln's first… 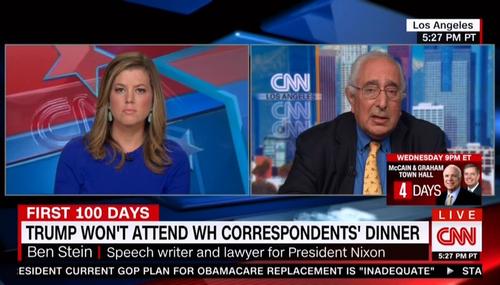 Kristine Marsh
February 27th, 2017 1:17 PM
Economist and former speechwriter for Richard Nixon, Ben Stein, appeared on CNN Newsroom last Saturday, where he slammed the media for making Trump a “punching bag” and “looking for a scandal” from the president on a daily basis. Stein told CNN’s Brianna Keilar, “I don't blame him for being furious at [the media].” Stein noted, “I think he's got a lot of company." 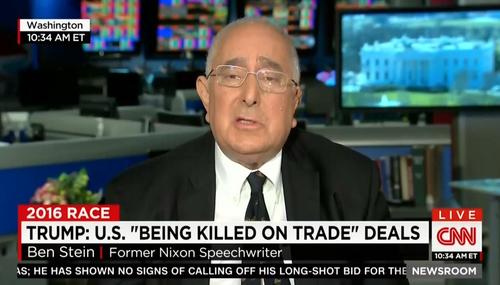 Brad Wilmouth
March 2nd, 2016 11:28 PM
Appearing as a guest on Wednesday's CNN Newsroom with Carol Costello, supposedly right-leaning actor, economist and former Nixon speech writer Ben Stein praised socialist presidential candidate Bernie Sanders's plan for national health care, and even admitted to a "fondness" for former law school classmate Hillary Clinton as he mused about whom he might support for President. It was only after… 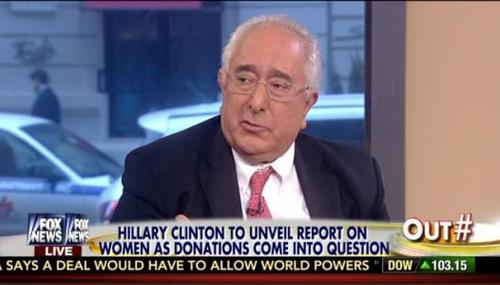 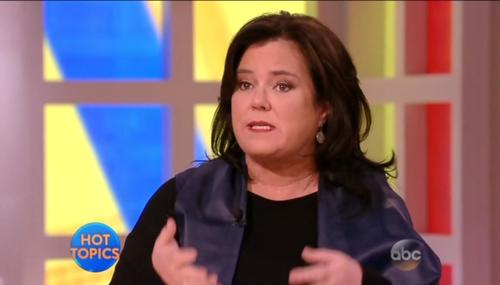 Jeffrey Meyer
November 4th, 2014 12:16 PM
On Sunday, actor and political commentator Ben Stein appeared on Fox News and made some highly controversial remarks about President Obama, accusing him of being “the most racist president there has ever been in America.” Following Stein’s offensive comments, on Tuesday, all four co-hosts on The View rightly criticized the actor, and unsurprisingly Rosie O'Donnell took her condemnation to a whole… 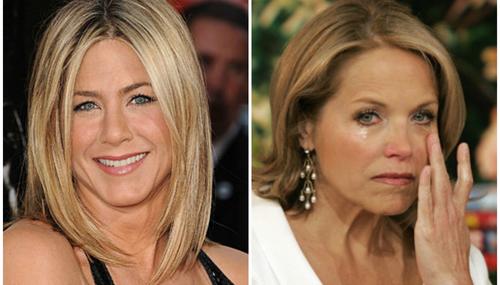 Matt Hadro
August 1st, 2013 4:55 PM
Former Nixon speechwriter Ben Stein took a shot at new CNN film "Our Nixon" on Wednesday, calling it "extremely one-sided." The film will air on CNN Thursday night at 8 p.m. ET. This comes as CNN plans to roll out a film about Hillary Clinton, the maker of which is "excited" to tell of her "fascinating life and work." Stein acknowledged that the Nixon film "is a great documentary. But it's… 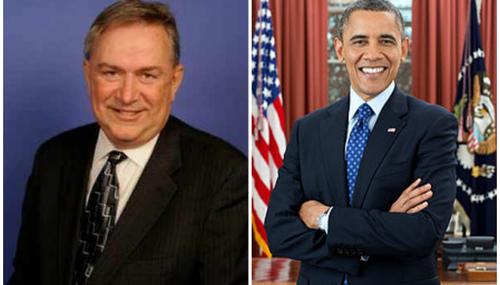 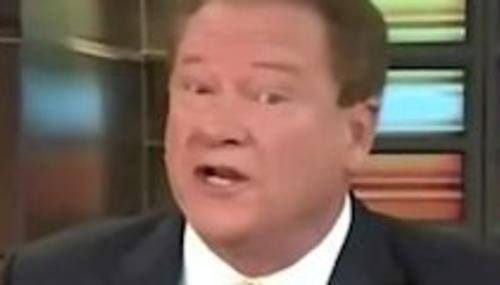 Matt Hadro
January 25th, 2012 6:23 PM
CNN claims to be the moderate voice of cable news, but it certainly doesn't play the part when it shills for President Obama's tax plan. Obama has called for the Buffett Rule, or higher taxes on millionaires, and CNN helped him make his case in a one-sided segment Wednesday afternoon. Anchor Brooke Baldwin begged for her viewers' attention before she aired Obama's liberal spin on taxes from… 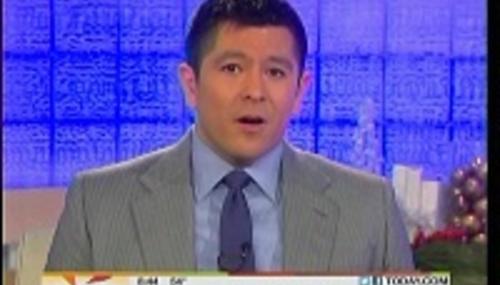 Brad Wilmouth
December 22nd, 2011 8:48 AM
Supposedly right-leaning actor, economist and former Nixon speech writer Ben Stein of late has become famous for advocating for higher taxes on the wealthy, but on Wednesday's The O'Reilly Factor on FNC, Stein was finally seen arguing from a conservative point of view again as he debated David Callahan of the left-wing group DEMOS, and argued that taxation rates on the wealthy are not to blame… 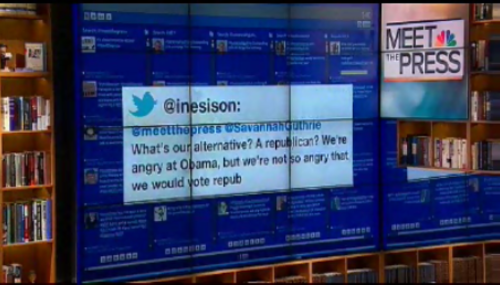 Noel Sheppard
August 21st, 2011 4:09 PM
Economist Ben Stein had some harsh words for Republican presidential candidate Rick Perry on "CBS Sunday Morning." Responding to comments the Texas governor made earlier in the week concerning Federal Reserve Chairman Ben Bernanke, Stein said, "I hope he'll get some moderation in his speech, and some lessons in economics, and soon" (video follows with transcript and commentary):