Ben Stein: Would the Clinton Foundation Have Accepted Money from 'Pimps?' 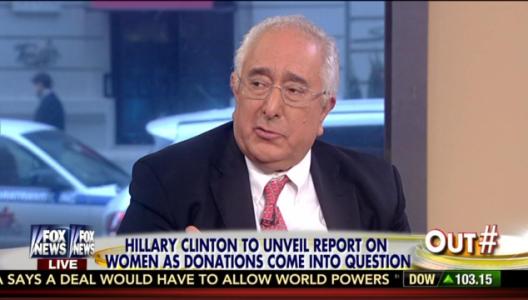 Actor Ben Stein absolutely nailed the hypocrisy of Bill and Hillary Clinton standing up for women’s rights while at the same time their foundation had accepted donations from oppressive countries like Saudi Arabia and the United Arab Emirates.

Sitting in on Monday’s edition of FNC’s Outnumbered, the conservative author asked how far the Clintons would sink when it came to raising money, as he wondered: “Would they have taken, accepted money from an organized criminal syndicate of pimps?”

Stein’s sharp attack came after a clip of Bill Clinton defending The Clinton Foundation’s acceptance of tens of millions of dollars from countries that Hillary Clinton’s own State Department had cited for violence against women.

Stein later added that the former Secretary of State wasn’t exactly setting a great example for future women leaders to follow: “If the example is taking money from countries that basically enslave girls, that’s not such a great example.”

The following is the relevant exchange from the March 9 edition of FNC’s Outnumbered:

ANDREA TANTAROS: As Hilary Clinton is set to unveil a long anticipated report on the state of women and girls across the world today her family’s foundation is coming under fire. The Clinton Foundation accused of accepting tens of millions of dollars in donations from countries that the State Department faults for their records on violence against women, sex discrimination and other human rights violations. Those countries include Saudi Arabia - which get this - donated between 10 and 25 million dollars to the Clinton foundation last year. The United Arab Emirates, Kuwait, Oman, Qatar, Algeria and Brunei. I mean these countries treat women horribly.

And here’s what Bill Clinton had to say about accepting that money.

(Begin clip)
BILL CLINTON: The UAE gave us money. Do we agree with everything they do? No, but they’re helping us fight ISIS. Do I agree with all the foreign policy of Saudi Arabia? No. You gotta decide when you do this work whether it will do more good than harm if someone helps you from another country.
(End clip)

TANTAROS: All right, so he is basically saying, Harris, that we need to take money from the bad in order effectuate good. I’m not buying that.

HARRIS FAULKNER: Well and this isn’t just the government taking money to effectuate good. This was a foundation that they set up, that they’re running with their name on it. And it’s been my recollection  – and I want to do more reading on this – but as I remember wasn’t there some question about whether or not he even wanted to say which countries they had taken money from? So if it was a problem to go on record with which ones gave, why is it okay now to talk all about it in the name of a common good?

BEN STEIN: Well would they have taken, accepted money from an organized criminal syndicate of pimps? I mean if he says - accepted the money...

STEIN: ...And if they’re concerned about the exploitation of women? A country that allows women, girls to be married at age nine? A country, countries that do not allow women to vote. I mean there is something very peculiar. There’s such a thing as a terrible example. And I think the Foundation, the Clinton Foundation is just flooded with money, I don’t think they needed to beg for money.

TANTAROS: It always sounds too, Jedediah, like he is saying the ends justify the means. And my question is are these donations buying Hilary Clinton’s silent when she was Secretary of State? I mean I did some research. She put out some mealymouthed statements on Saudi Arabia and women driving. But do you think that, that has affected how she has come out, when she was Secretary of State and went after these countries for their treatment of women?

JEDEDIAH BILA: I think the key here though is her whole brand has been compromised. She was gonna come out and be talking about women’s issues and make women advocacy a key issue. I’m sure she was getting ready to go after Republicans, “war on women” nonsense. This makes that job a lot harder.

If she was gonna become the first female president of the United States I think that women’s issues was a key part of how she was going to enter that stage and make a key impact on women voters. That is compromised by these donations and where they’re going. Because it’s enormous hypocrisy coming from a Clinton.

MELISSA FRANCIS: No, I’m not sure. I mean - I don’t know that people doubt she’s for women after this as much as they say to themselves she’s just not sincere. You know on one hand
she’s saying she’s out there fighting for women and fighting for their rights. On the other hand she’s taking money from countries that oppress them. To me it just means that she’s interested in money.  And what she’s saying to me is insincere...

STEIN: Exactly!
...
STEIN: Well she made a very powerful speech to the Emily’s List wealthy, leftist group a few days ago and she basically said “If I can do it, follow me, watch my example.” Well if the example is taking money from countries that basically enslave girls, that’s not such a great example. I mean she’s basically not saying “Look I’m John Adams, look I’m Abraham Lincoln.” She’s saying “I’m an example for women.” Is this a good example?